Viewing a precious stone in a jewelry store is one thing, but unexpectedly finding a treasured gem in an unlikely locale is far more exciting. That’s true for restaurants as well—nowhere more so than on Long Island where some of the best are hidden away in unlikely, difficult-to-find, off-the-beaten-path places. Among them, according to the respected Zagat Survey of Island Restaurants are the ones serving the best food. There are at least as many others tucked away in the Island’s nooks and crannies that aren’t mentioned in Zagat. Generally these far-out-of-the-mainstream spots fall into two categories: Those that are largely invisible, squirreled away on little traveled roads in the middle of nowhere and those fully-visible but in unexpected venues as in “What’s a restaurant like this doing in a place like that?”
Let’s start with the out-of-the-way, I-never-knew-there-was-a-restaurant-there places.

Time might have passed the 28-year-old Chez Noëlle on Willowdale Avenue near the railroad tracks in an obscure, undistinguished industrial/commercial area of Port Washington. The trendy crowd long ago gave it a pass. Yet, although it’s not nouveau or nouvelle cuisine, it does offer fine French classics at prices as low as $27.50 for its excellent three-course fixed-price dinner. 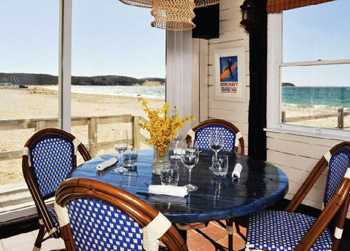 The newish Navy Beach in Montauk is one of the most isolated and remote restaurants on the Island. This waterfront seafood spot fronting Fort Pond Bay is on little known and even less traveled Navy Road. But turn on your GPS and get out your Hagstrom, because it’s worth the search. This relaxed, agreeable, easy-to-take spot boasts a short seafood-skewed menu consistently well executed by Paul LaBue, a veteran East End kitchen commander who saw previous service at Nick and Toni’s, The Laundry and The Beacon. 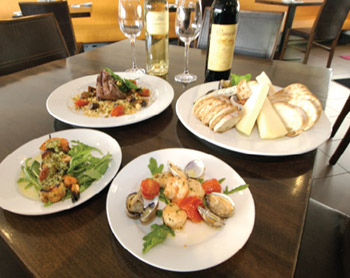 Fatfish Bar and Bistro, tucked into the dead end of tiny Cottage Avenue in Bay Shore in an area of marinas and boat yards on Great South Bay, is the sort of laid-back, relaxing spot that should dot Long Island but doesn’t. It’s a moderately-priced, shorts-and-tee-shirts, use-your-fingers kind of place on an expansive over the water deck serving seafood favorites like lobsters, steamers, shrimp, scallops, clams, oysters, fish cakes and bisques as well as choices from the land.

Café La Strada is an unimpressive looking little Italian storefront in a strip shopping center about 100 feet south of Exit 56 on the LIE. It looks like a zillion other mediocre cookie-cutter Italian restaurants, but it isn’t. There’s someone special in the kitchen—Steven Bua, son of Hugo the founder. He consistently rewards the foodies who jam the place with enormously-satisfying dishes including housemade breads, cakes, pastries, pastas, custards and tortoni. Additionally, there’s a wine cellar room lined with 8,000 bottles with another 22,000 bottles downstairs making Hauppauge’s Café La Strada one of the Island’s great destinations for serious wine drinkers.

La Plage, a sophisticated beachcomber on little-known Creek Road in Wading River, is a long way from any main drag. Instead this upgraded seaside shack is across the road from a parking lot on the Long Island Sound. But La Plage is no rough-and-ready clam bar. Wayne Wadington, its self-taught chef-owner turns out consistently pleasurable and interesting fare and his waitstaff strikes the perfect balance between professionalism and informality.

Diners who hear that Annona in Westhampton is perched over an auto dealership near the railroad tracks might be turned off. That would be a mistake. It’s a sleek, sophisticated, upscale, fine dining spot. Its full-flavored, front-of-the-mouth, modern Italian dishes are artfully presented. It is in fact one of the very best restaurants on the Island and that “auto dealership” is more like an art gallery featuring $100,000 to $350,000 Lamborghinis, Bentleys, Ferraris and Rolls-Royces.

Although the West End Café is located in a strip shopping center that runs perpendicular to Glen Cove Road in Carle Place, it is indeed a hidden gem. It’s in the corner of a less-than-crowded shopping center and is virtually invisible from the road. The chef and owner Bill Holden prepares exemplary new American dishes with some European and Asian touches. Additionally his twilight menu is one of the Island’s most amazing values.

Finally, there are two outstanding restaurants right out in the open, but considering their excellence, they’re in unexpected spots.

Many diners and the Zagat Survey consider Maroni Cuisine in Northport the best restaurant on Long Island. And I wouldn’t argue with them. A narrow storefront on Woodbine Avenue off Northport’s main thoroughfare, it’s run by the gregarious and talented Mike Maroni and his wife Maria. There is no menu at this one-of-a-kind establishment that specializes in tasting meals of fourteen to eighteen tiny courses plus just about all the wine you can drink. It’s a place where diners wearing jeans, sweaters and sneakers munch on caviar, truffles and other creative refined delicacies (as well as Grandma Maroni’s meatballs from a century old recipe).

The Mediterranean Snack Bar, on New York Avenue in Huntington, looks like an undistinguished and far from unusual Greek storefront spot. But it’s been there for 34 years and there’s a reason for its longevity. Despite its unremarkable ambiance and modest size, the Med’s gentle prices, fast service and generous portions of fresh salad, flat fish (often caught by owner Steve Soulellis) and great gyros keep ‘em coming back for more.