They know when to hold and when to fold, they know when to stand pat and when to change. No, they aren’t poker players; they are three of the most successful, dominant restaurateurs on Long Island. Although you might not have heard of them, if you’re a typical Long Islander, you’ve probably eaten in at least one of their restaurants. Indeed, it would be difficult to avoid their culinary mini empires that stretch from Montauk to Manhattan and beyond. They own, or have owned, French, Italian, Belgian, Alsatian, Mexican, American and Asian restaurants as well as hamburger joints, pizza parlors and more. They all started out as dishwashers, and they are all infatuated and immersed in the world of food and restaurants.

But unlike some restaurateurs who own a single eating place, fall in love with it and fail because they hold on even when they should bail out, this trio is unanimous in their thinking. “It’s ok to sell,” they say. Indeed, they all have bought and sold many a restaurant, and changed the format and concept of still many more. 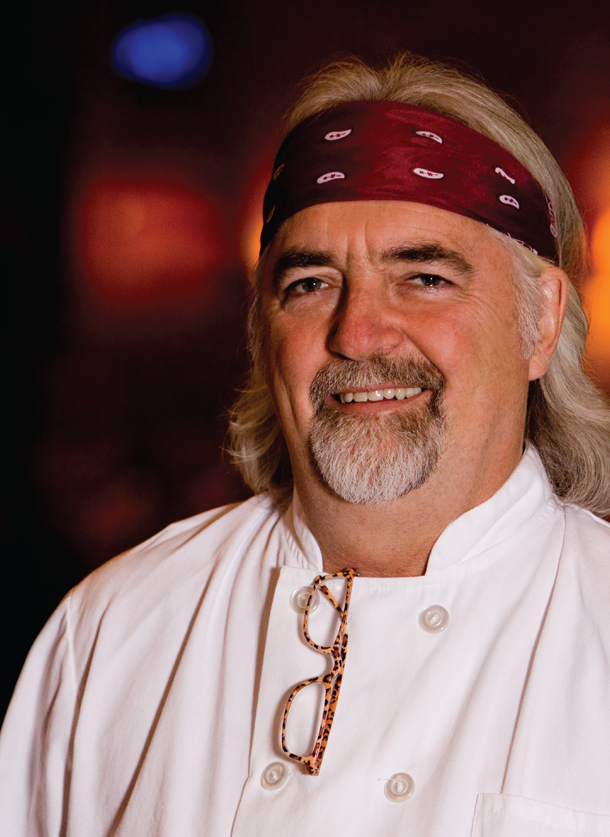 Tom Schaudel is typical of the breed. He lied his way into a dishwasher’s job, but when people didn’t show up for work or came in drunk, he found himself on the line preparing food at The Sirloin Steak Pub in Westbury. Well before that, he’d been bitten by the restaurant/cooking bug. His great-grandmother, a cook in Switzerland, taught his grandmother who became a talented cook in her own right. Tom hung around her, learning everything he could. After The Sirloin Steak Pub, with only a 10th grade education, he attended and graduated from the prestigious Culinary Institute of America. He then learned from and partnered with Sandy Curti, a sous chef at the famed Le Pavillon in Manhattan.

In 1983, he and two friends came up with ten thousand dollars each and bought Panama Hattie’s in Huntington. In so doing, Mr. Schaudel was on his way. Today he owns Cool Fish in Syosset, À Mano in Mattituck and the Ross-Schaudel catering and event planning service. But he has, over his 57 years, owned the Spring Close House in East Hampton, 107 Forest Avenue in Locust Valley, Lemongrass and Tease in Roslyn, Maxwell’s in Garden City, the Downtown Grille in Montauk and Jedediah Hawkins in Jamesport. In a few months, he will open a 10,000-foot, 266-seat restaurant in Melville, the “Grand Stage,” he calls it.

But Schaudel’s not stopping there. In the future, he hopes to run a wine bar, a hip diner and a little sandwich shop. As he says, “I’m still jazzed up by this industry.” Although he doesn’t enjoy the paperwork and red tape involved with restaurant operation, he thrives on menu development and creating new dishes. Schaudel loves to play golf, play his guitar and practice kung fu, but food and being in restaurants is what he loves most of all. When asked, “What and where do you enjoy eating?” He replied, “I like it all, from pizza places to Per Se.” 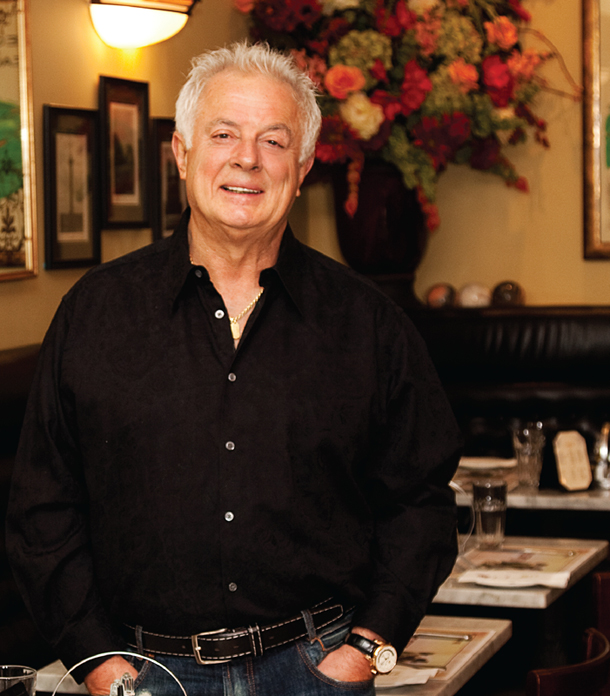 Fabio Machado, a proud Brazilian of Italian background, has sold more restaurants in the past few months than most people own in a lifetime. Echoing other successful restaurateurs, he says, “Everything in life is buying and selling.” Recently, his emphasis was on the latter as he sold Toast, Bin 56 and Osteria Toscana in Huntington, as well as the property for Porto Vivo and what was Abel Conklin’s, which are also in Huntington where Mr. Machado lives.

All of this is a far cry from his humble immigrant beginning in this country in 1973 when he worked as a dishwasher at a huge restaurant on the New Jersey Palisades that served 600 people a night. He operated a gigantic dishwashing machine that burned his fingers so much he went home every night with no feeling in them.

Mr. Machado had more than enough of that after a year and took what money he had saved to open a small electronics store on 46th Street in Manhattan’s Little Brazil. Then in 1981, he moved to Huntington and opened the Victor Hugo Lady’s Boutique Store. It was there he began his restaurant career, for next door was an Indian restaurant whose owners felt the loquacious Mr. Machado was made for the hospitality business. In 1986, they made him the manager and part owner of what he turned into Fabio’s Brazilian-Italian Restaurant, although he had no education or experience in acquiring and operating restaurants (other than he, like his mother, being a great cook).

Four years after Fabio’s, using a large commission his wife Linda earned in the insurance business, he and a partner opened Pomodoro in Port Washington. It was the beginning of an acquisition streak that included three Pomodoros (one in Manhattan), two Pomodorinos, Bistro Cassis in Huntington and Manhattan, Brasserie Cassis in Plainview, La P’tite Framboise in Port Washington, Moules Et Frites in Syosset and along with Hugo Garcia, his Argentinean-born partner, Café Buenos Aires in Huntington. Mr. Garcia, along with Mr. Machado’s sons Eric and Jason and his business manager Dean Kois, all own minority interests in the other Machado restaurants as well. Along the way, Mr. Machado also shed the likes of Enoteca in Locust Valley, a newer version of Fabio’s, two of the Pomodoros and all of the Pomodorinos.

Bistro Cassis in Huntington remains his favorite. He and Mr. Garcia went to France to buy its interior, including the 1970’s era mirror and backing for the bar. Additionally, the same people who were there when it opened ten years ago remain today.

When asked what he likes most and least about running restaurants he said, “Yes, to drinking the good wine” and no to “dealing with employees and the government.” In his spare time, Mr. Machado cooks, collects wines and drives a 1969 Mercedes sports car. Although he says he plans to concentrate more on real estate than the restaurant business in the future, he quickly adds that he plans to open an American and a fancy Italian restaurant in the foreseeable future. 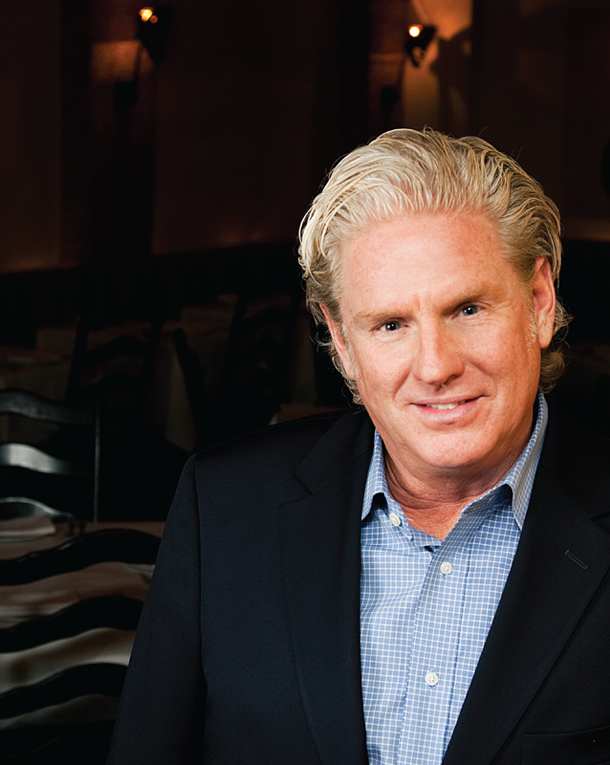 John Tunney is his great uncle’s nephew: Gene Tunney, one of the few boxers who ever bested Jack Dempsey, was aggressive, intelligent and fast on his feet. John continues to exhibit those same characteristics in a different realm—running a growing restaurant group that stretches from Long Island to Las Vegas.

After helping his grandmother cook from age nine, Mr. Tunney got a dishwasher’s job at age fourteen at the Three Village Inn. He had only the briefest exposure to any education to prepare him for the restaurant business. After only eight weeks at an upstate community college where he was a hotel and restaurant management student planning to go on to Cornell, he had a difference of opinion with a professor that led to his departure. But not before he had to prepare Zucchini Creole for 3,000 people over a weekend as a punishment. It took him two weeks to get the zucchini and tomato off his fingers and less than that to bid adieu to academia.

Nevertheless, Mr. Tunney was hooked on the restaurant business. His first venture was at the Oheka Castle in Huntington in 1992. He simply drove up to the front door and told the people in charge he had a vision for the place. That vision became Carltun Caterers. Mr. Tunney worked his way up the culinary ladder finding something in every place and person where he worked. Among the restaurants he owned were Olio at the MGM Grand Hotel and the Temple Bar, both in Las Vegas, and Carltun on the Park here on Long Island. Presently, he operates three Besito Mexican restaurants in Huntington and Roslyn as well as West Hartford, Connecticut. Honu Kitchen and Cocktails, an upscale spot in Huntington, is also one of his, as is American Roadside Burger in Smithtown. There will be more Besitos in the near future. One in Boston is in the planning stage, which will be followed by a Los Angeles outpost making the Tunney Empire a coast-to-coast operation. But the biggie for John Tunney right now is the Ballo Italian Kitchen and Social Club at the Mohegan Sun Resort and Casino, a ten thousand-foot colossus with three bars, a gigantic pizza oven, a mozzarella bar and homemade pastas. Ballo, which means dance in Italian, will also encourage diners to dance on the tables after 11pm.

Mr. Tunney has no favorite specific cuisine; rather, he immerses himself in the food that will be served at his next restaurant. Right now, he’s eating Italian seven days a week. Prior to opening Besito, he pursued Mexican food in all of its manifestations—that’s when Besito became his favorite, for he loved not only that food but also the culture, the people and the warmth of Mexico. There, as in his other restaurants, his aim is to create a high-impact environment where people can enjoy themselves. His brother David has been his partner at a number of his restaurants for a decade, and John Reiger, a Northport attorney, has been a partner from the beginning. Mr. Tunney will receive the Restaurateur of the Year award from the Family Service League this December.