Although I’ve shipped to both poles, I’m a habitually flying landlubber. Cramped planes are dreadful, but my New York high-rise cube defines my claustrophobic limit—boats cross that line. Boat aficionados are usually swell folks, but it’s impossible to dodge any unsavory below-deck inmates and knock-kneed boat toilets can be trusted like four year-olds on sugar. 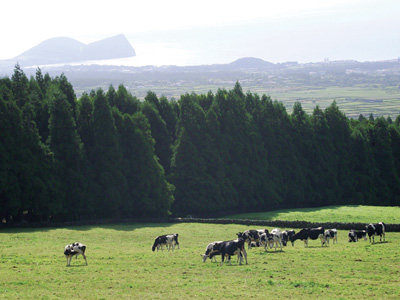 I do envy international boaters, like my wooden boatbuilding cousin Brendan, who snub airport security toil and wink at surly immigration interrogators while breezing across international boundaries. Portugal’s mid-Atlantic Azores Islands intrigued me because every addicted transatlantic sailor I know, including that Maine cousin, assumes a dreamy farsighted gaze while imagining them. Sorry cuz, I flew in.

The only islands between the US and Europe are summits of some of the tallest mountains on the planet, as measured from their ocean bottom base. 1,000 miles from mainland Euro civilization, 240,000 Azoreans live within the nine-island archipelago’s 868 square miles (roughly ten times the size of Martha’s Vineyard) of rolling checkerboard farms and pastures partitioned by aged stone walls. Dappled with Mediterranean-hued homes and remarkable wind and salt-blown ancient churches, the rugged coastline melds Irish coastal bluffs with bluish waves tumbling over jagged black volcanic rock shorepoints. Volcanic activity steams the tides while the interior highland mountain cloud-forest undulates with bizarre vegetation and sputtering volcanic chimneys. 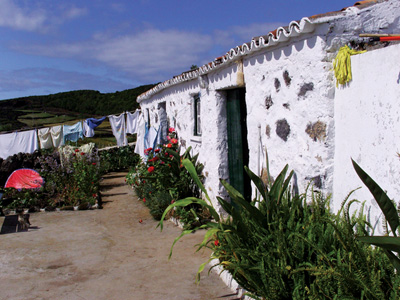 Happily stranded here in the ideal midst of nowhere, these calm, sea-locked North Atlantic Islanders now seem immune to continental conflict, or worse, fast food. I explored Terceira, an island still producing naturally-preserved, non-refrigeration worthy “sailing food” including organic goat cheese, olives, hot peppers, an array of milk cheeses, lupines and overcooked corn. These staples are routinely available as appetizers in most local restaurants, some connected to revived 15th century farmhouses and country stores. It’s nearly impossible to find processed food here. Fresh variations of goat cheeses introduce every meal and the just-harvested fish and meat options astound. Livestock also seem to enjoy the year-round climate range from 60 to 85F—like a cooler Hawaii. The climate lends itself to vineyard tastings after a round of golf. There’s no turn-em-and-burn-em mentality at these divine restaurants—meals last hours.

My imagination leapt inside the nun visiting cage at Terceira’s Jesuit College, a transformed convent. A classroom-sized space is partitioned by a six-foot wide permanently empty jail cell intending to prevent visitors from touching the nuns on the other side of the no-go zone. If two adults fully extend their arms into the void, they can almost touch each other although we’ll never know what they said to each other. 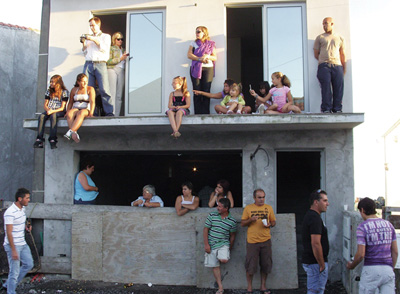 Terceira’s version of the running of the bulls happens 270 times each year on various neighborhood streets. Tromping nowhere in particular, a bull romps the length of these block parties while amateur volunteer daredevils taunt the darting bull with umbrellas, towels and madmen gesticulations—all vying for Saturday Night Fever-style king status. Kids and grandmothers wave red shirts from partially-barricaded windows while bands of friendly, drunk men mingle alongside portable bars.

On the entertainment agenda since the 12th century, largada is interpreted as “bulls run free,” or “get loose.” This demolition derby mentality is similar to lining up alongside a hazardous highway hoping to witness a gory accident. I used to play chicken on Long Island’s railways, but getting hit was definitely not a goal. Inviting a deadly, unpredictable bull-dozer to ravage your otherwise calm street seems harebrained, but it beats video game dependency.

I saw a few comedians scaring various onlookers with false start jokes—pretending that a raging bull was inbound. While locals calmly hang along the road awaiting a 2,000-pound typhoon of mad burger, every door and alleyway is temporarily boarded up as if a major hurricane looms. After the run, the town is quickly unfastened.

The bull is never harmed or killed. When a bull harms or kills a person, the bull’s stock value soars. When was this sort of animal stardom gavel-whacked into law?

There’s something dazzling about being roused from a Renaissance dream by a 16th century door knocker. Both the Azores and Portuguese mainland countryside teem with churches (one in Santarém houses the tomb of Pedro Alvares Cabral, who discovered Brazil), Gothic period convents, cloisters and castles. 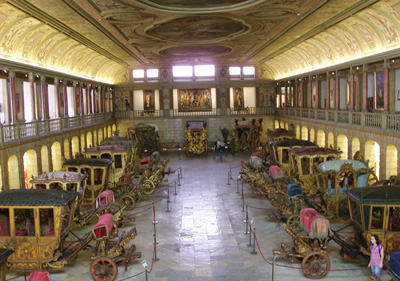 Typically in serene countryside settings, 43 of the hundreds of mind-boggling forts and castles (often one in the same) have been transformed in pousadas, which are luxurious hotels respectfully built within or connected to historic sites including 14th century forts, castles, churches, palaces, national monuments and simply beautiful places.

The 19th century whaling industry forever linked Massachusetts to the Azores. Whaling industry-inspired migrations sent many Azoreans to Boston and beyond. Most of the Portuguese immigrants to the Boston/Bedford/Plymouth area of the US (and elsewhere) are from the Azores. And, for the most part, they’ve never visited continental Portugal.

Portuguese Europeans are likely to speak far more English than their Spanish and French neighbors. One explanation is their presentation of American television and cinema with subtitles, not with voiceovers as in Spain and France. On the mainland, colonial repatriate returnees from Brazil and Africa enhance the ethnic medley.

Lisbon is home to Fado, Portugal’s homegrown traditional music that’s as vital as jazz is in America. Usually a trio includes a singer, classical guitarist and a vital guitarra portuguesa player, and these painfully beautiful melodies have been packing clubs since the 1830s. One theory of its origins refers to Fado as “homesick sailor” music, born and bred in Lisbon when Portugal’s pioneering sailors took their guitarras on long and dangerous voyages.

Never amplified, respectful silence and no dancing are the conventions in every dimly-lit venue. Fado is a feeling that inspires facing your destiny, loving what you have, missing what you miss. Pleasantly haunting and rousing in its singular genre, I can only compare it to bluesy Italian folk music. While watching Fado star Joana Amendoeira sing while placing a hand on 12-string guitarra phenom Mario Pacheco’s shoulder, a powerful, calm sophistication filled the room. The Portuguese guitarra resembles a large twelve-string mandolin (PS, gypsies play them lefty).

Independent since the 12th century (in Europe, only Denmark has had intact borders for a longer period), Portugal’s pure sober-lined architecture spans the globe. The Spain-bordering Alentejo region booms with every architectural era including bewildering first-line defense castles dating to the Middle Ages.

Lisbon, a hilly capital with trams, “the city of seven hills,” has the nightlife magic of any European downtown, minus the hassle or hustle. Lisbon’s National Coach Museum houses a spectacular collection of horse-drawn carriages dating to the 16th century. Some of these jewel-studded royal vehicles were pulled by eight horses. I put myself through college driving a carriage around Manhattan, so this exhibit blew me away. To trot along in one of these marvels today would redefine arriving in style.

Basking in the half-life of their permanent grins, the newest Portuguese navigation conquest is redirecting Americans into Western Europe’s coolest country. The good old days are now.

On the island of Terceira, the city of Angra do Heroísmo has been awarded World Heritage status by UNESCO thanks to its Renaissance core, whc.unesco.org/en/list/206. Terceira means “the third,” earning its name because it was the third discovery among the nine Azorean islands.

Information about Portugal’s 43 amazing pousadas is on www.pousadas.pt. Check for discounts on castle-hopping packages. In Lisbon, I recommend Hotel Mundial www.hotel-mundial.pt (centrally located, not a pousada). For rough-and-tumble gourmet seafood (relaxed mayhem like in your favorite diner), visit Lisbon’s Ramiro Restaurant, cervejariaramiro.com.

The Azores Atlantic climate ranges from 60 to 85F year-round—mild, but open to sudden changes. Rain is more likely from October to April. More on visitazores.com.