Before the latest vampire-light craze took off, everyday was Halloween for some eighties post-punk/Goth/industrial bands like Ministry, Bauhaus, Siouxsie and the Banshees, Shriekback and Sisters of Mercy, among others. Here are some top picks for your Halloween party, or listening pleasure…

1. Aside from their 12” single above, Ministry’s first record “With Sympathy” was industrial synthpop at it’s creepy best on tracks like “Effigy (I’m Not An)” and “Revenge,” where Al Jourgensen sings in a spiteful, faux English accent: “Far below original sin/?Far below the state I’m in/ Far below is the place you’ll go-o-o” 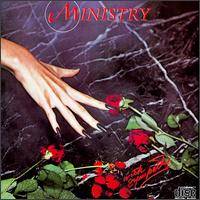 2. “She’s in Parties” by Bauhaus – Macabre single off 1983’s “Burning from the Inside,” which includes the title track and the classic Goth slow burner, “Bela Lugosi’s Dead,” Undead, Undead.

3. “Lucretia My Reflection” by Sisters of Mercy – A big influence on industrial music in general, this song is filled with cold lyrics to match its mechanical sound: “I hear the roar of a big machine/ Two worlds and in between/ Hot metal and methedrine/ I hear empire down… Lucretia, my direction, dance the ghost with me.”

4. “Halloween” by Siouxsie and the Banshees – This rocker really gets you in the mood to go Trick-or-Treating as Siouxsie shrieks: “The night is still/ And the frost it bites my face/ I wear my silence like a mask/ And murmur like a ghost/ Trick or Treat.”

5. “Nemesis” by Shriekback – From 1985’s “Oil and Gold,“ these post-punk Brits wrote a great song to end your Halloween night. “Priests and cannibals, Prehistoric animals/ Everybody happy as the dead come home/ Big Black Nemesis, parthenogenesis/ No one move a muscle as the dead come home.” You’ll be tempted to dance in your costume. How un-Goth-like.