It’s not your mom and dad’s stodgy old Broadway anymore. It’s your mom and dad’s stodgy old Broadway tricked out with multimedia, ironic commentary and tons of post-modern `tude. From characters in Avenue Q and Spamalot who break the fourth wall with inside jokes to 19th Century teenagers in Spring Awakening who snatch up hand microphones every time they rock out, we’ve begun an age of “meta” theater—that is, shows that comment on themselves even as they’re playing out their plots. 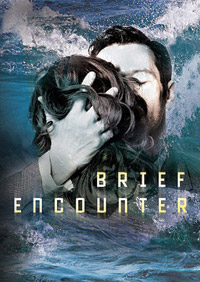 This fall Broadway season has gone mad for meta. For example, England’s Kneehigh Theatre, imported to the Roundabout’s Studio 54 Theatre through January 2, chose to turn Noël Coward’s tender, melancholic romance, Brief Encounter, into a highly theatrical, Brechtian concoction of cabaret songs, special effects, sight gags and, oh yes, the actual story. While inventively staged and featuring a number of Our Town-ish moments where the style complements the proceedings, mostly we wait for the sometimes silly, nearly always extraneous, baggage to fall away so we can get back to the doomed romance at its center. Though nothing can dim the luster of breathtaking actress Hannah Yelland as a housewife who falls for the right man at the wrong time, all the undercutting of the play’s tender moments only reinforces the feeling that Kneehigh is attacking fine silk with a rhinestone bedazzler.

By contrast, the new rock-inflected docu-comedy, Bloody Bloody Andrew Jackson, works better because its throw-anything-against-the-wall form matches its attitudinizing content. It’s not exactly satire; this piece by the acclaimed Les Freres Corbusier troupe is structured more like a post-modern debate that examines Jackson as superstar much the way Andrew Lloyd Webber and Tim Rice once did the same for Jesus. Was the seventh president of the United States a hero for expanding our borders and making the wilderness safe for settlers or was he perhaps the most powerful, and therefore worst, exponent of Native-American genocide? Or a bit of both.

Featuring Benjamin Walker as a churlish, none-too-bright but earnest Jackson, BBAJ makes us reflect indirectly on every political leader, from our last dim-bulb Republican to the impossible, often conflicting demands made upon our current head of state. No question, the Kids in the Hall-meets-Spring Awakening staging can be hit and miss, but the overall experience really feels like something fresh and different on 45th Street. 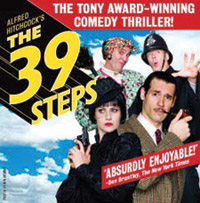 Another show that has stayed unique in its technique—and delightful in its fun—is The 39 Steps, which enjoyed a two-year Broadway run before moving off Broadway to New World Stages last March. Like Brief Encounter, 39 Steps takes an old movie—in this case a breezy Hitchcock thriller—and gives it an irreverent once over. For example, to escape out a “window,” the hero simply holds a hollow square in front of him, puts his hand through it (to the sound of smashing glass), and then “climbs” through the center. Dozens of similarly inventive touches abound and the only ones that don’t work as well are the overly jokey and self-mocking ones, proving again that even in a spoof, you need to trust the material and, in this case, the brilliant theater artists adapting it. 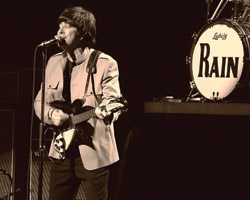 Finally, for those seeking nostalgic comfort food in meta-theater form, there’s Rain, a Beatles tribute show that’s been touring since the mid-1970s. Although the faux four who play a bunch of Beatles tunes—often note-for-note from the records—dress and try to look exactly like John, Paul, George and Ringo, they keep their own names and don’t actually impersonate the group. Backed by video montages and the occasional light show, Rain (the band) make a passable night’s entertainment, but how much more fun if they’d instead used the voices, personae and instrumentation they’ve so masterfully nailed to then deviate from the records, rework the vocals and take more creative solos. Mainly I wonder if Broadway will soon see the likes of Fred Zeppelin, Bjorkestra and The Mungo Jerry Experience. Bring mom and dad.