Paintings of war-torn cities could be ugly. The compositions could depict piles of crumbled concrete, crashed steel, strewn possessions and skies dominated by smoke from explosions.

None of this is present in the exhibition CITIES OF PEACE at Guild Hall museum in East Hampton. So is the absence of recognizable cityscapes, street grids or images of urban life. This is the only aspect that’s jarring about artwork made by the Illumination Atelier of the Ellen Frank Illumination Arts Foundation.

Instead, each painting is an easy-to-look-at abstracted portrait of a city that’s survived destruction, regrouped and has stretched toward the future. A future that hopefully holds peace. 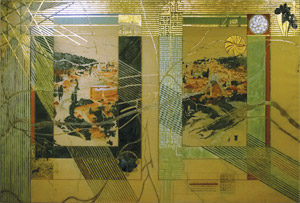 CITIES OF PEACE paintings feature nine cities whose abstracted essence is captured in illuminated paintings. They are Baghdad, Beijing, New York, Hiroshima, Jerusalem, Kabul, Lhasa, Monrovia and Sarajevo. The show also contains smaller paintings on paper and a video depicting the making of the paintings and the art of illumination.

Foundation founder and artist Ellen Frank selects cities ravished by violence but casts them with hope, honors their resiliency and focuses on the transformation from anguish to beauty. In doing so, the city’s identity moves past the tragedy that defined it to reclaim its culture as primary in perception. The city’s history and culture is thoroughly researched by a team to discover its unique qualities.

For instance, Iraq’s painting (Baghdad: City of Peace, Truly) weaves its main imagery from the cuneiform creation myth found on a clay tablet in 3,000 BC with a 1925 aerial photograph and plans illustrating the city’s urban design as The Round City (762 AD). Symbolism of its ancient past and modern culture is contained within the pattern-filled painting. 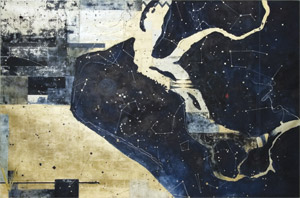 Afghanistan (Kabul: I Love Her [for knowledge and love both come from her dust]) is awash with beiges and feels subtle and quiet. The painting was inspired by a 17th-century love poem for the city and a panoramic photograph from the late 1800s. Activities and items banned are threaded into the composition to conjure a woven tribal carpet—one of their celebrated art forms.

Liberia’s painting (Monrovia: In Constellation) is an abstracted night sky of lush blues and golds. The work aims to “herald a renewed harmony within the Liberian capital,” according to exhibition information. The art springs from a historic map placing the constellations as they appeared on Liberian Independence Day on July 26, 1847 at 10 p.m.

Information gathered is fused with Ms. Frank’s artistic vision and executed with the ancient art of illumination. Ms. Frank holds an interdisciplinary PhD in English Literature and Visual Arts from Stanford University. 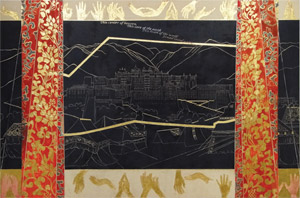 Illumination uses gold, silver and powdered metals to create surfaces that shimmer. They are applied in multiple layers. Reflections change with lighting conditions and viewing positions. Walking past the art infuses it with motion and the reminder that things that seem fixed are mutable.

Paintings are produced by hand by international interns working at the Illumination Atelier in East Hampton. Each has a say in the work’s development, said Ms. Frank. The Guild Hall show is the first time the series to date has been exhibited. Future paintings are planned for Beirut, Warsaw and Phnom Penh.

CITIES OF PEACE is on view through January 16, 2011 at Guild Hall, 158 Main Street, East Hampton. The museum is open Friday to Sunday. Visit guildhall.org or call (631) 324-0806. Details on the exhibition, the Illumination Atelier and the Ellen Frank Illumination Arts Foundation, Inc. can be found at efiaf.org.

Peace Festival
Guild Hall and the Ellen Frank Illumination Arts Foundation are holding a Peace Festival on January 15, 2011 to explore the art on view in the CITIES OF PEACE exhibition. Events take place from 1 to 5pm at Guild Hall Museum in East Hampton. The Peace Festival is free with $7 suggested museum admission.