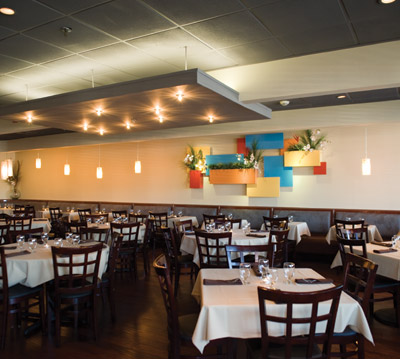 Press releases aren’t always accurate or objective but the one that described the food at Perfecto Mundo (Perfect World), a new Commack restaurant as “Latin-inspired” was on target. It could also be referred to as creative, innovative or even luxuriously Latin.

Veteran Executive Chef Steven Del Lima and chef/owner Liz Keschl are offering not rustic, everyday taco and tortilla dishes, but interesting, sophisticated spins on south of the border basics. Although the likes of cilantro, salsa, lime, Tabasco, chilies, mango, etc. dot the menu, few South or Central Americans ordinarily (or ever) would recognize entrées like chipotle-orange barbecue glazed Tilapia ($19) with Mandarin orange-mango salsa, coconut-lime emulsion and two-cabbage slaw as well as black rice. It’s a tasty, terrific amalgam of moist, carefully-cooked fish as a base topped by a mini skyscraper of those ingredients that complement the delicate white-fleshed Tilapia rather than obliterate it. Like many of the dishes at Perfecto Mundo, it’s a dish most American diners will appreciate and enjoy. Asparagus tempura, wakame seaweed salad, Maui onions and smoked paprika croutons (in the Caesar salad) won’t be frequently found on the tables of Bolivia, Brazil or Belize, but Mr. Del Lima usually makes them work in his very personal take on Latino fare.

Perfecto Mundo’s ambiance and menu are in sync. This new hotspot (only one or two tables were empty when I visited two weeks after the mid-September opening) where Cantina Maize had been, is a sharp, slick, white table cloth spot with drop lighting, candles, dark Venetian blinds and a modern wall design. Its black-clad waitstaff were doing better than most after only two weeks on the job. (It wasn’t perfecto, one dish was delivered to the wrong diner and the four entrées arrived two at a time with a bit of a gap in between.)

Fusion, as in Asian fusion, is a buzz word at local restaurants and has been used to describe Perfecto Mundo. But I’d categorize the fare here as Pan Latino rather than Latin fusion. While all the dishes are unmistakably Latino, they don’t necessarily fuse the cuisines of different nations. Yet, it’s a distinction that is of little concern to most diners as long as the food satisfies and most of it does here. 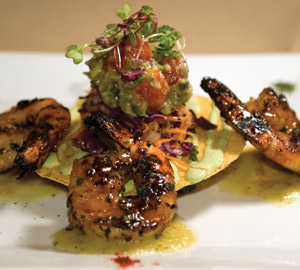 Although Perfecto Mundo is in many ways a temple to seafood, the coriander crusted pork tenderloin ($20), with its soft tender meat, grilled linguica, spicy roasted corn and jack cheese, masa cake, tomato and sweet coconut salad, is an exemplary preparation of varied flavors and textures that are crisp, crusty, spicy, starchy and tender all at once. Chipotle dusted King Salmon ($20) sported a crisp surface and moist core while three soft corn tacos stuffed with pulled chicken, greens and cheeses and enlivened with a noteworthy taco sauce proved to be a bargain at $16.

A limited list of desserts (churros, crème brûlée etc.) provided no home runs. Finally, if you like sangria, the smooth, genial, humming Perfecto Mundo is the place to order it. 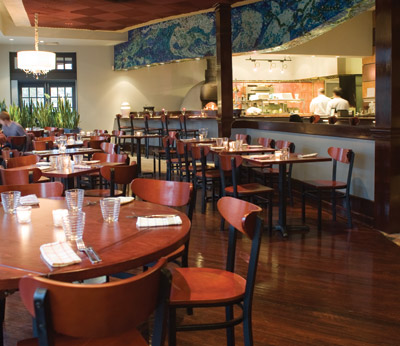 You want straightforward, you want simple, you want basic? The Metropolitan Bistro in Sea Cliff, where Tupelo Honey had been, might be for you. Beyond its predictable bistro vittles, this noisy little offspring of the mammoth Metropolitan Catering establishment in Glen Cove looks much like its predecessor at this location. Yes, it’s newly painted, its wood-burning pizza oven has been reconfigured, the mosaic is gone and there are a few fancy chandeliers that I don’t remember from Tupelo Honey. But most of the room remains essentially the same. The bar, dining room and kitchen are as they have always been. Aside from its familiar, recognizable contours, much of what is encountered at the Metropolitan Bistro is small, including most of the portions, the menu, the tiny, bare, cramped tables for four, the diminutive dish rag napkins and thankfully most of the prices.

Modest prices are but one of a number of virtues here, including a terrific, tasty, Margherita pizza ($10). It’s baked in that wood-burning oven and is covered with ripe, fresh tomato slices rather than tomato sauce, layered with marvelous melting mozzarella and flavored with noteworthy basil. All of which rests on a crust that’s neither thin nor thick, but thankfully isn’t bready either. Aside from the recommended pizza, target desserts, all of which are made by the Metropolitan’s pastry chef in Glen Cove. The whipped cream that accompanies many of the sweets (all $8) is the real thing. So too is the good, gooey chocolate cake; the tangy lemon tart festooned with blueberry coulis; the soft, refreshing poached pear; the silken cheese cake striped with chocolate sauce; and the ramekin of apple cobbler with a warm, mellow interior but a too doughy cap. The pear was complimentary, a free fifth dessert given to diners who order four. 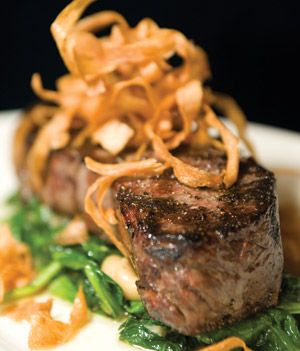 Among the starters sampled were a respectable pumpkin soup of the day ($9) that would’ve been better with a couple of shakes of salt; a tabouli salad ($8) featuring lots of pita and little tabouli; a Beluga lentil salad ($8) with just a thimble or two of the lentils and no discernable evidence of its promised andouille sausage; and a crisp, vibrantly-flavored, lightly-breaded, crispy shrimp cocktail ($11) perched on a bed of cabbage, cilantro and scallions.

There are only six entrées on the Metropolitan Bistro’s limited menu. We tried two of them—a fine flaky, though teeny square of Chatham cod fish ($21) and two hearty Long Island duck drumsticks (and thighs) sporting a crisp surface with cashew, carrot and potato platemates. From the sandwich list came a towering so-called “perfect burger” ($12 plain, $14 with onions or cheese). It was tall, correctly cooked (medium rare) and sprinkled with strings of Manchego cheese, but slightly salty. A daily scallop special held four or five medium-sized tender morsels encircling a centerpiece of potatoes in a cream sauce that was priced at $27, a dollar more than the most expensive menu entrée (a strip steak).

Service at the Metropolitan Bistro was like much else here—a mixed bag. Servers were sweet, accommodating and concerned. Yet, two entrées were delivered to diners who didn’t order them, no butter or olive oil came with bread replacements and there was no mention of coffee or tea at the meal’s conclusion.