For many years now, jazz music has struggled to maintain a presence in the world of mainstream popular music. Very few jazz artists are signed to major record labels, and a hit jazz record or even obtaining any substantial radio airplay for jazz is nearly impossible. Yet, one jazz artist defies the odds by remaining not only a vibrant jazz artist, but also one who, without sacrificing his art, has often crossed over to rock and pop. That artist is Herbie Hancock.

For all of Hancock’s breakthroughs in music, perhaps none was more shocking than his win at the Grammy Awards for album of the year in 2008 for his album River: The Joni Letters (Verve), released in 2007. It was only the second time a jazz album won the Grammy for album of the year. The previous one was the 1964 album Getz/Gilberto from Stan Getz and João Gilberto in 1965. River was an album of mostly Joni Mitchell compositions that teamed Hancock with singers such as Norah Jones, Corinne Bailey Rae, Leonard Cohen, Tina Turner and Joni Mitchell herself. Hancock’s band consisted of such jazz legends as Wayne Shorter and Dave Holland, guitarist Lionel Loueke and drummer Vinnie Colaiuta, who has played with Frank Zappa, Sting, Jeff Beck and Joni Mitchell. Larry Klein, who was married to Mitchell and has produced several of her albums, co-produced the album.

The idea of Hancock performing Mitchell’s music made sense, as Mitchell has played with many jazz artists (including Hancock and Shorter), did an entire album with Charles Mingus (entitled Mingus, and on which Hancock appears) and the two are friends. The success of River alone will secure Hancock a place in a very elite music club. However, since even before his debut album Takin’ Off in 1962 on Blue Note Records, and such early solo classic jazz albums as Maiden Voyage and Empyrean Isles, Hancock has been a part of historic jazz sessions, including working extensively with Miles Davis between the years 1963 and 1968 in a band that also included at various stages Ron Carter, Tony Williams, Wayne Shorter, Dave Holland, Chick Corea, Joe Zawinul, John McLaughlin and Billy Cobham. From those groundbreaking albums, such bands as Weather Report, Lifetime, Return to Forever, the Mahavishnu Orchestra and Hancock’s own Headhunters were formed and defined the sound of jazz fusion. In addition, Hancock formed V.S.O.P. and did soundtrack work including Round Midnight, which won him an Oscar. He also worked on the soundtrack to Michael Antonioni’s defining 60’s film Blow-Up and scored big with his 1983 album Future Shock, which included the hit “Rockit’.” The song featured the groundbreaking MTV video by Godley and Creme, which won five video awards, including best video at the inaugural MTV Video Awards. The list of albums, collaborations, awards, concerts, bands, soundtracks and compositions is endless.

Hancock has a new album, The Imagine Project, on his own Hancock Records. He recorded for years for such distinguished jazz labels as Blue Note and Verve, and major labels as Warner Brothers and Columbia. It was a quirk of fate that led Hancock to start his own label. “River was the last record of my deal with Verve. They had an option for one more,” he stated. At this point Hancock laughed and indicated that the letter stating they wanted to pick up the option came about a week late, thus freeing the man who had just won the Grammy for album of the year to strike out on his own. “I wanted out because I wanted to own my own masters and they’re not willing to give that up,” he said.

The Imagine Project is Hancock’s first album since River, which he felt no pressure following up. “I thought it was time for me to do a new record,” he stated. The album, which uses the John Lennon song “Imagine” as its centerpiece, features a large cast of artists from all over the world and from many musical genres. Hancock drew inspiration from Lennon’s song as a metaphor for the album’s message. 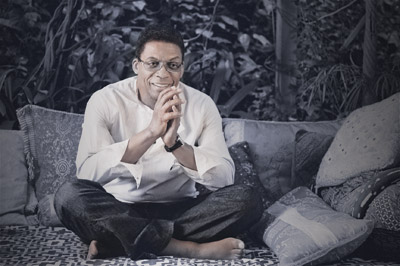 He said the album is “serving a purpose,” and he was “not just putting a bunch of songs together.” Hancock said the album thematically “addresses such issues of today as the economic crisis and how banks are failing.” He sees such problems as the result of “globalization,” which is what he ultimately explores lyrically on the album. Unlike many people, Hancock is not afraid of globalization and thinks that “peace through globalization” can happen through a new sense of human collaboration. Hancock feels that the best way for people to move forward in this age of globalization is to not fear it. “The 21st century is going to be the century of globalization—the beginning of a new paradigm for honesty,” he stated. “So many people are completely afraid of globalization. They feel victimized, but they have the power.” Hancock said that both he and his producer Larry Klein agreed that The Imagine Project, which took two years to make, was the hardest record they ever worked on.

“Doing each song was like doing a whole record, because there is no carryover from one song to the next,” Hancock explained. While the album was primarily recorded at his own studio in California, there were also recordings done in studios all over the world. The cast is even bigger than the one on River. Some of the guests include Jeff Beck, Dave Matthews, Derek Trucks, Los Lobos, John Legend and Wayne Shorter. 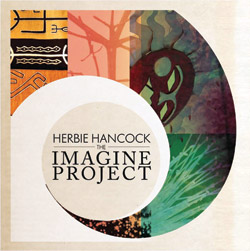 In analyzing the success of River, Hancock said of the impetus for the album: “I wanted to do something I hadn’t done before.” As a jazz pianist and primarily an instrumentalist, Hancock said throughout his career he “hasn’t paid much attention to lyrics” and instead focused on “harmonies and textures.” Hancock praised Mitchell as a “person of courage” and characterized her lyrics as poetry.

Any conversation with Hancock would have to include discussing his time with Miles Davis. Of his influence, he said, “I’m never going to be too far away from Miles.” Hancock felt that the most important thing that Davis taught him was the “importance of listening.” He also said that Davis “allowed freedom for the musicians to explore.”

There are still many artists who Hancock would like to work with from all musical fields including classical, country, rap and pop. He specifically mentioned Elton John, Queen Latifah and Alicia Keys.
Hancock is one of the few jazz musicians whose career has been so varied and who continues to get stronger. Hancock summed up why he has been so successful: “When I make a decision about a direction I want to go in, I’m really serious about it. How can I get inside the heart of it, not just the desire, but the drive and willingness to dig in? Be honest about it and look at the bigger picture, not just what’s in front of your face.” Then, Hancock paused, laughed and said, “If you want to get me to try something, tell me I can’t do it.”