Like New York City Fashion Week, the sport of skiing has seen its share of trends come and go. But if one thing has remained a constant over time, it is this—powder. Powder is how Mother Nature delivers the snow and, arguably, it’s the best medium for skiing in its purest form. Sure, it’s awesome to hold an edge cranking through a hard, fast Giant Slalom turn on virgin corduroy. And it’s pretty cool to find your rhythm and let it rip through the bumps. And the first time I stomped a 360 in the terrain park felt pretty cool. But there’s nothing quite like the feeling of floating through bottomless pow.

If you were to assume you can’t find that kind of snow here—and by “here” I mean the east—you’d be wrong. You just have to know where to go, when to go there and what to ski when you do.

Finding epic powder in the east isn’t just a matter of hunting down the highest raw annual snowfall totals. The quality of that snow matters, and we’re looking for powder, light and deep. Nor is powder indicated by the length of a mountain’s ski season or the strength and coverage of its snowmaking system. Because, frankly, man-made snow just isn’t the same as that delivered pure and simple from Mother Nature. Nor is it a matter of prestige. More popular mountains with big name recognition may get skied off too quickly, so that the powder they do have is gone before you ever get a chance to ski it.

Like the Himalayan snow leopard, or a non-corrupt politician, east coast powder is an elusive beast. But it’s there to be found, for sure. You’ll know it when you find it—standing at the top of an untracked run, in the silence of newly fallen snow…until that silence is broken by the hoots and hollers of a joyous skier making first tracks through the fluff. That skier could be you. This is your guide to making it happen. 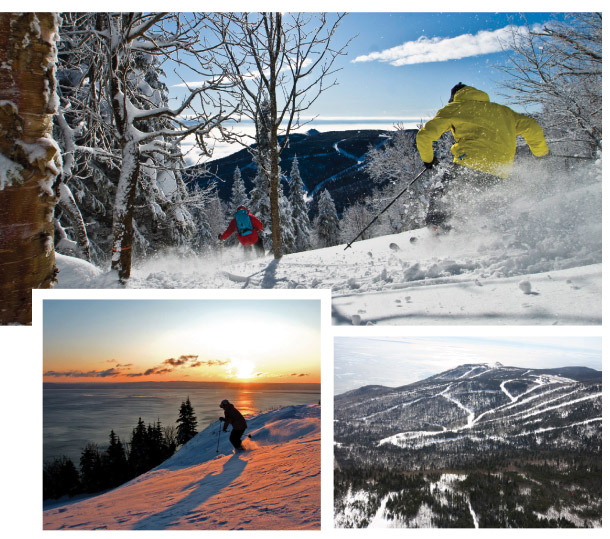 Every—and I mean every—Quebec skier I’ve talked to says the same thing. For the best powder in the province, make haste to Le Massif, in the Charlevoix region on the northern shores of the St. Lawrence, not far from Quebec City. After nearly a decade of skiing on and off throughout the province, I have to agree.

The coastal influence pumps moisture into the air, which then falls as snow—to the tune of an average 264 inches per year over the last five years—onto the mountain that boasts the greatest vertical drop of any Canadian ski area east of the Rockies. Powder here can last for days, not the hours or minutes it might at other eastern ski areas that are already tracked out before you’ve even finished your morning Starbucks.

With a base area elevation of just 118 feet above sea level, and tucked along the Seaway, you’ll feel like you might ski right off the mountain and into the icy waters. Plus, compared to Mont Tremblant, which attracts the bulk of English-speaking US skiers, Le Massif—deep in the heart of French-speaking Canada—feels downright exotic. Whether you say it in French or English, though, neige poudreuse has a common meaning—pure fun.

To score the best of what Le Massif has to offer, heed the wisdom of mountain ambassador Vincent LaJoie, who offers: “The beginning and end of the season usually get the biggest snowfalls, with a relatively drier period in late January and early February.” Le Massif can be accessed from the base or the summit, so start your day at the summit, where you can be waiting, clicked into your skis, for that moment when ski patrol drops the red rope—usually 8:30am. In addition, most storms blow in from the northeast, so ski south or southwest-facing slopes that really get loaded with snow. Finally, if you can, stay near the mountain in Baie-Saint-Paul, as opposed to Quebec City. “A few times a year, we get dumps exceeding two feet,” LaJoie explains. “The main road often closes in those instances and you’ll have a limited number of people on the mountain because people can’t come up from the city.” 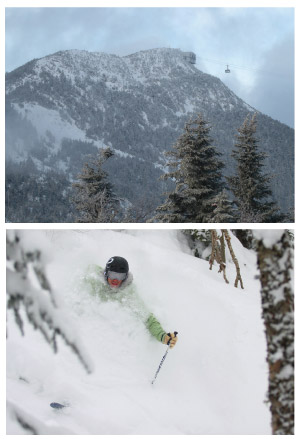 Any even remotely dedicated east coast powder skier knows it: Jay Peak is the best in the eastern US for deep pow. Period. The mountain’s 350-400 inches of annual snowfall put it into a genuine class by itself. Many attribute Jay’s prodigious snowfall to the “Jay Cloud,” a legitimate weather phenomenon that gives Jay more snowfall than pretty much any other ski area east of the Rockies.

The mountain also sits in a kind of north country nether-region, with a foot in each of two worlds—the Green Mountains to the south and the St. Lawrence to the north. If a storm tracks one way or the other, Jay benefits where other ski areas might miss out. It’s also farther north than more popular Vermont ski areas—Stowe, Stratton, Killington—overrun with New Yorkers and Bostonites. Pass them by, knowing you’re destined for Vermont’s promised land of east coast pow.

When you arrive, follow the advice of Micky Doheny, who headed up Jay’s ski school for 26 years. “Get there early,” he says. “You gotta get on that first lift and go for it. No dilly-dallying.” Start with the main ski runs. Once they get skied off, move into the glades, but avoid more popular tree runs such as Timbuktu, Valhalla or Canyonland. They get tracked out pretty quickly. Instead, move around the mountain and look at others’ ski tracks. Then go left or right to find your virgin snow. 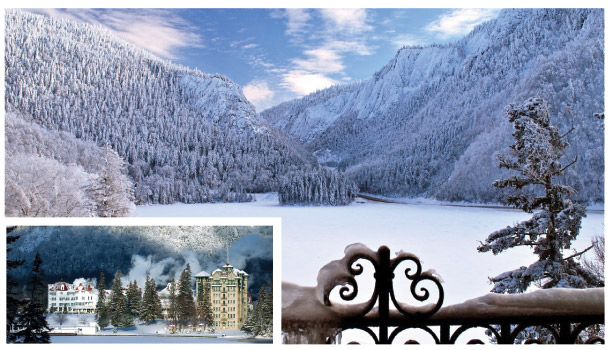 If you haven’t heard of The Balsams, you can be forgiven. It’s tucked away in a remote, quiet corner of northern New Hampshire. But consider yourself on notice—it gets more and better snow (some 250 inches or so) than possibly any other New Hampshire ski area. Cannon Mountain is known for Bode Miller; Wildcat for its stunning postcard views of Mount Washington and the rest of the Presidentials in the White Mountains; Bretton Woods for its resort. But under-the-radar The Balsams boasts powder coupled with an exclusive, upscale experience for its guests. Which means that the powder is reserved—more or less—just for you.

You’ll almost certainly pass Cannon Mountain en route as you drive north through Franconia Notch, but if you’re tempted to stop, don’t. Stay the course knowing you’re headed to a ski area that gets an extra 100 inches of snow compared to Cannon, all thanks to Dixville Notch, which “captures” weather systems and wrings out their moisture…right over The Balsams’ slopes.

For Director of Skiing Andy Pearson, the best powder shot is The Flume, a top-to-bottom glade run that catches the best snow from Nor’easters coming up from the south-southeast. On the other hand, if an Alberta Clipper-type storm comes in from the west-northwest, point your skis or board for The Notch Glades, The Balsams’ most challenging run, with plenty of drops and rocks to keep your attention. 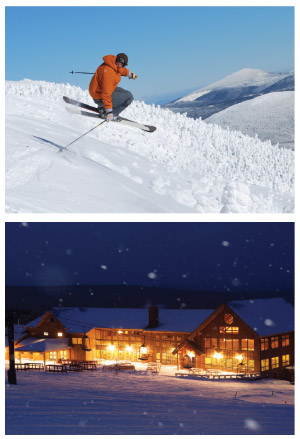 Saddleback Mountain may stand some 100 feet lower than Sugarloaf, its primary competition, but it boasts an additional two feet of average annual snowfall. In addition, it’s more remote and less trafficked, meaning that its fresh snow goes further than it might if Saddleback were farther south and more accessible. Make the trek here and you’ll be rewarded. Even more so if you heed these insider’s tips from Jared Emerson, ski patrol director: Golden Smelt (turn right off the Rangeley double chair) holds snow really well. “On the upper mountain, Frostbite, Black Beauty and Warden’s Worry get blanketed and we typically don’t groom them,” he says. “As the day progresses, you’ll find powder on Muleskinner and in the Casablanca glades.” They’re a little farther from the chairlifts, a little harder to get to (with some traversing), but the reward is great. “Casablanca is big and vast, and will hold snow for weeks. If we get 20 or 30 inches, and then have a dry spell for 2 weeks, you can still get fresh tracks in there.”

Sure, Whiteface has hosted the Olympics and other high-caliber races. And sure, it has plenty of groomers that—from time to time—can turn a wee bit icy. But there’s also one undeniable fact about the mountain: It boasts the most snowfall of pretty much any ski area in New York State, plus the most vertical—a winning combination, for sure.

Best of all, if you know where to go, you can also find some pretty good powder, too. You’re best bet on a powder day is to nab first chair (technically, first gondola) to get up onto the mountain and then make your way over to the Wilmington Trail on the Lookout Mountain side of the ski area. From Wilmington, drop off the trail into Sugar Valley Glades, part of Whiteface’s newest expansion terrain and the best spot to find untracked powder on the mountain.