The days of artificial intelligence taking over the world are even closer than you think.

StatSheet.com, a company created in 2007, aggregates statistical analysis of college football, basketball and other sports. Through charts, various graphs and breakdowns, the site gives diehard sports fans something to chew on, more so than the average stat list.

Things became strikingly different, however, when the company released the StatSheet Network, through which 345 NCAA Division I men’s basketball teams have websites where stats are plugged into algorithms to formulate actual game stories.

“My goal was that 80 percent of readers wouldn’t question that the content was written by a human,” said Robbie Allen, the company’s founder, in an interview with The New York Times, “and now that we’ve launched, I think the percentage is higher.”

Hofstra’s “ThePrideUpdate.com” and Stony Brook’s “SeawolfDaily.com” are the only Long Island colleges in their system, primarily because they are only involved with Division I schools right now.

“Each site will include data driven insights, compelling narratives, game previews, game recaps and over twenty additional article categories, as well as photo and video highlights,” StatSheet said on its website. “In addition, each site will be accompanied by its own Twitter account, Facebook fan page and mobile application.”

They’re wrong, there can never be compelling narratives. There can never be a better-crafted story than by a team’s beat writer, who knows the ins and outs of the program better than anyone, including a computer program.

“We believe this personality-based, editorial model is capital intensive, inefficient and destined for change,” they went on to say on their website. “At StatSheet, we leverage next-generation technology to produce high quality content more efficiently and in a less egalitarian and more interactive manner.”

What about quotes? Background material? Context? Injury reports? Sidebars? Editorial commentary? As much as Mr. Allen and his company think this is the “future of sports media,” it’s not. It’s another fun gadget to look at for the time being.

Here’s an example of a game story from Stony Brook’s contest against Wagner:

“Following up the win against Farleigh Dickinson, Stony Brook has us skeptical. On November 21st at a neutral site, the Seawolves lost a close one to the Seahawks, 58-54. An item of note about these two teams: A year ago, Stony Brook beat Wagner 72-48.

Wagner got the win by outplaying Stony Brook in assists and three point shooting. Three-pointers were devastating, as Wagner shot 40% from three-point range and Stony Brook shot 19%. Wagner spread the ball around with ease, and their 9 assists gave them an advantage compared to 4 from Stony Brook.

Bryan Dougher did his best to keep the Seawolves in it with 15 points in 35 minutes. Dallis Joyner contributed a game-leading 13 rebounds. It’s important that Stony Brook gets past this loss to Wagner. This drops the Seawolves to 3-2 but it’s still early. Coming up, we get Lehigh on December 1st.”

At the bottom, there is also a stat list, and the following day they add a recap notes column, with more stats. 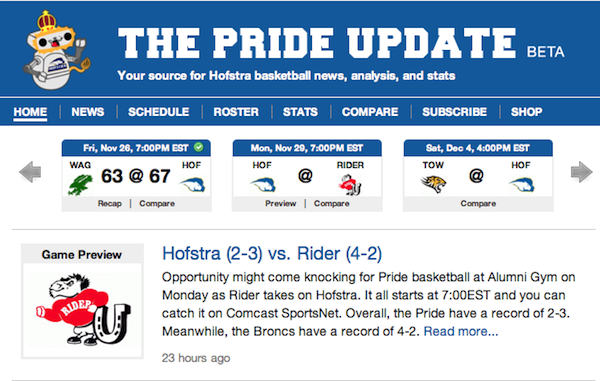 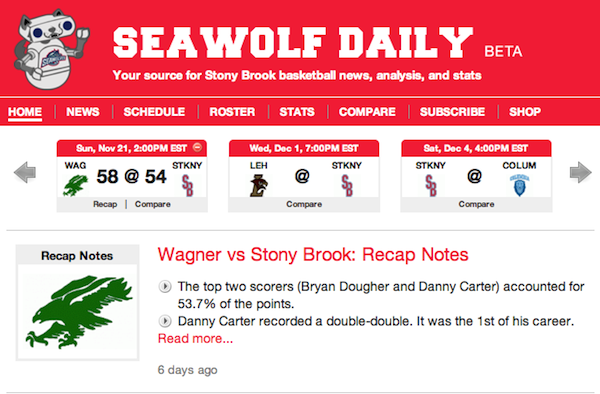