Welcome to the first edition of “Eleven Questions with…,” a brand new series at Super Neat Beer Adventure, Yes!! that poses eleven random questions, beer-related or not, to a Long Island craft beer _________________.

Our first guest is new Long Island microbrewery Ghost Cat Brewing, operated by Scott Pereira and Paul Mazziotti and based in East Islip. 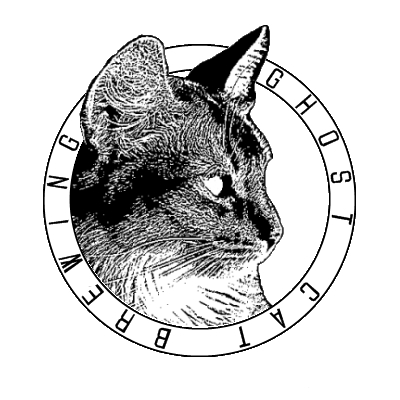 “Eleven Questions with…” is Ghost Cat Brewing’s first formal introduction to the Long Island craft beer world and comes on the weekend prior to their first official event, a “Free Tasting Party” at The Cortland on Monday, 1/24.

1) Introduce Ghost Cat Brewing to the craft beer universe (not a question, I know, but Super Neat Beer Adventure, Yes!! is all about breaking the rigid, conforming structure of…stuff).

2) What exactly is a “Ghost Cat,” and what is its origin? Are you two haunted or often visited by the spirit of a former domesticated pet named Mister Flufflekins?

Scott: The name originated from Paul’s fiance Katie. When Paul was considering giving home brewing a try, Katie said “Ya know, I think Ghost Cat would be a great name for a brewery.” The idea was inspired by her mom’s cat Buzz.

Paul: After some not so extensive Googling, Scott found a phenomenon where the ghost of dead pets sit on the chests of their past owners causing loss of breath. Spooky! Get Stephen King on it…

3) When were you first introduced to craft beer and, subsequently, homebrewing?

Paul: I attended college in Rhode Island and my first night there, the guy down the hall brought over a six pack of Magic Hat #9, which was very popular in New England at the time (subsequently Magic Hat became a very popular brewery just about everywhere). Prior to this my only beer experience was standard American light lagers. The idea that beer could actually have flavor blew my mind and really got me interested in seeking out new and exciting craft beer. I got into home brewing after years of drinking craft beer — the breweries detailed explanations on their brewing practices and ingredients got me very interested in brewing, but I was still pretty intimidated by the idea. Around that time I ran into an acquaintance who told me he was brewing and I thought, well if he can do it, I sure as hell can.

Scott: When I was younger, my father brewed on a serious system…Mr. Beer. I never tasted his beer of course, but it inspired me and a friend to attempt brewing when we were of legal age. We never got past basic extract brewing, but we did make an Imperial Red called Toxic Shock. If you drank it, you would definitely go toxic. My friend Jason also worked at the Black Forest Brew Haus in Farmingdale, where I met Joe Hayse (head brewmaster). Joe was a major inspiration in my beer journey from that point on. To this day my dad insists his beer was the nectar of the Gods.

4) The establishment of Ghost Cat Brewing?an initial goal prior to homebrewing, or more like, “Hey, I think we could really start our own brewery,” after some time (and several test batches, of course)?

Paul: When we started brewing together in 2008, the focus became Ghost Cat.

5) If provided the chance, which Golden Girl would you choose as Ghost Cat Brewing’s official spokesperson? And yes, deceased Golden Girls are perfectly acceptable as answers.

Scott: Blanche, because she was down to party!

Paul: We have spent the last 2 years experimenting with our core recipes. Our flagship oak-aged Pale Ale is a light APA that is completely late-hopped with Amarillo, Columbus and Simcoe. It is also dry-hopped and aged on French oak. The seasonal we are focusing on right now is a Summer Ale that is spiced with fresh horseradish root, and inspired by the Kölsch style. We plan on focusing on these two beers, and producing one-offs sporadically. These one-offs adaptations will be of past batches and new recipes.

7) What type of message are you attempting to convey with both the brewery and its beer?

Scott: I don’t know that we have a message, but we love to brew beer, and we love the people that drink our beer.

8) An important ideal in craft beer is often the brewery’s association to the community it is based in. What significance does Long Island have to Ghost Cat Brewing?

Paul: Long Island is wonderfully diverse and offers so much natural beauty, so this really inspired our recipes and the way we brew our beers. This influence has come through in many of the ingredients we use, since we try to use locally grown spices and fruits. We’re excited about being involved in the community and we believe in the importance of having high quality, locally produced products.

9) What are Ghost Cat Brewing’s plans for an official launch? What stage of licensing are you in, if any?

Scott: We are in the early stages of obtaining our license. From what we here, this can be a potentially lengthy process but hopefully we’ll have more details on our official launch in the coming months.

10) Your “Free Tasting Party” at The Cortland on January 24th will be Ghost Cat’s first official event with the public. How did the idea come about? What should one expect that evening, in terms of beer and otherwise?

Paul: After becoming friends with Bobby Gulinello at The Cortland, he asked if we would be interested, and we jumped at the idea. As it turned out, we were just in the middle of an experiment with our Pale Ale’s mash profile, and thought it would be cool for people to try the same beer brewed three different ways while also providing R&D. In addition to our Pale Ale we will have two Belgian-inspired Ales, and were planning on having a Brown Ale ready for the event, but the yeast had different ideas. We will be pouring the beers ourselves, and are excited to see our friends, families and fans. We may also have some other tricks up our sleeves…