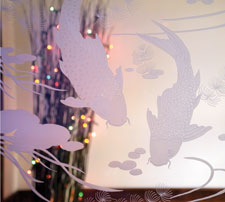 There must be a zillion little, look-alike, taste-alike, Japanese storefront restaurants on Long Island. Most of them are mediocre. Often in non-descript shopping centers with predictable, interchangeable sushi-dominated menus, these tiny spots understandably generate little excitement among diners who justifiably feel “if you’ve eaten at one of them, you’ve eaten at all of them.”

Now comes Onsen, yet another unimpressive looking peep of a place that’s as undistinguished as the Oakdale shopping center in which it’s located. Yet, although it seems like all the rest, it isn’t.

Jason Chen, a hard working young chef who earned his stripes at Nisen in Commack (one of the Island’s best Japanese restaurants) has opened his own place and it’s a winner. He and his affable crew exude a warm, generous, eager-to-please spirit and, more importantly, are churning out a stream of dishes that look like Park Avenue presentations and have the taste and quality often encountered at upscale, midtown Manhattan Japanese destination restaurants.

One soaring, eye-catching dish after another emerges from the diminutive sushi bar and modest kitchen. A crunchy, lightly-battered, fried jumbo soft shell crab ($8) comes in an artfully-constructed upright presentation. Another appetizer, a so-called eggplant sandwich ($11), is actually a creative picture book row of ten or so red eggplant, lobster salad, salmon, spicy tuna and eel layers enlivened with a snappy wasabi sauce. A moist so-called pizza sandwich ($13), that melds spicy tuna, avocado, crab, lobster salad, eel and lively wasabi sauce, is its equal. Other starters that deserved more than a passing glance are: The deep bowl of soup, dense with seafood ($4.50); the standout oyster yaki ($10) of four sautéed oysters on the half shell in a drinkable garlic butter sauce; rock shrimp ($11) or tempura-style crustations with mixed green and seaweed salad finished with a big-punch spicy aioli; and rare tender beef tataki ($9) spiked with a (non Japanese) Pommery mustard balsamic.

If sushi, sashimi and rolls are to your liking, or even if you’re not absolutely sure, this is the place to try them. If you don’t like ‘em here, sushi just isn’t your thing. Instead try the long, crunchy, grease-free shrimp tempura or the bountiful portion of long spaghetti-like udon sautéed noodles laced with fresh seafood. 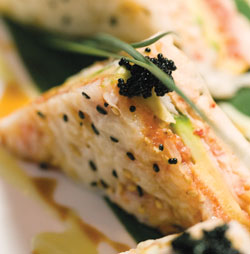 But the big boppers at this rather anonymous, unpretentious eatery are: The sushi for two platter ($38) whose twenty pieces and two special rolls offer a survey course in diversity; the fifteen pieces of sashimi ($16) presented with a thin, towering bamboo leaf; and the maki combination plate ($13) or two rows of tuna, yellow tail and California rolls.

But don’t cut down on calories in anticipation of desserts; they are the usual, predictable, eminently skipable Asian drill. 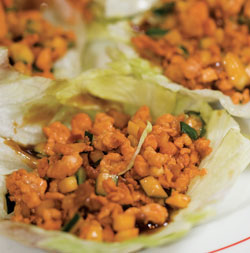 Philippe is a high-visibility, high-end, celebrity-centered restaurant serving luxurious, inventive spins on traditional Chinese cuisine. The creation of the Chinese-born owner and executive chef Philippe Chow, this glittering new restaurant that opened in December in Jericho (where Palio, Six Degrees and Capriccio had been) is the latest in Mr. Chow’s haute Chinese empire, with outlets in fashionable locales like West Hollywood, Miami, Mexico City, East Hampton and New York City. Everyone from Oprah and Lady Gaga to President Obama have eaten at one or more Philippes.

Even its financial backers, Chauncey Billups of the Denver Nuggets and Jerome “The Bus” Bettis, former Pittsburgh Steelers and present NBC personality, are celebrities of a sort.

The Jericho restaurant is a subdued, prestigious place of comfortable red leather banquettes, window-lining rows of white orchids, pale walls, chandeliers, flattering indirect lighting and flickering candles. It’s as much like a typical Chinese storefront as a Smart Car is like a Rolls-Royce. Rather it’s about chic, beautiful people, beautiful food and beautiful presentations (even the fried and white rice comes in silver urns with attached serving spoons). 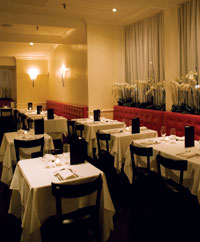 Yes, stylish, sophisticated, soothing, lifestyle venues like this cost a lot more than Chinese storefronts. Although there is a $32 satay, a $135 entrée for two, a seven pound Peking duck for $60 and a bottle of wine priced at $1,350, there are also plenty of lower-cost options including a three-course Monday night $29 special dinner.

There are few unfamiliar dishes at Philippe. Most diners have ordered spring rolls, spare ribs, satays and dumpling starters and the prawn, lobster and chicken entrées on its menu. But few if any have experienced all the hedonistic excesses and imagination they receive here. The three chicken satays ($15) are served with a delightfully-light cream sauce that harmonizes perfectly with the tender meat. The crispy seaweed ($12) is deep fried to an airy, pillowy consistency. The colossal green prawns ($54 for two) are a high-quality jumble of shrimp marinated in spinach, whole cashew nuts, water chestnuts, black mushroom and peppers. And the crispy wild Alaskan salmon ($46 for two) is fresh and smooth as snow with a commendable interplay between sweet and sour. The headliner here is that golden, burnished seven-pound Peking duck precisely carved tableside by a chef who puts the slices into tiny pancakes sufficient for four diners.

It’s difficult but possible to find a disappointing dish here, but the tasty chicken wrap or soong ($15) is more than a tad dry and the equally tasty, crunchy duck salad ($12) was served at an alarmingly icy temperature.