These aren’t your father’s Seawolves or even your older brother’s. The Stony Brook University athletic department has been blossoming at a breakneck pace, working to stay in stride with the academic side of the university that might be growing even quicker.

In 2003, Jim Fiore took over the reins of a department that earned its Division I status just four years prior. The school had one conference championship to its credit. Then in 2009-10 alone, it earned six. Its men’s lacrosse team is a legitimate Final Four contender, if not on the short list to win the national title. Existing athletic facilities are being upgraded and new ones are popping up thanks to a tremendous fundraising effort. The school isn’t just attracting quality athletes, but its teams have posted a 3.0 cumulative grade-point average each of the last four straight years.

In just a short time—by athletic programs’ standards anyway—the department has developed into a factor not just regionally but also nationally. And at the current rate of growth, there’s no telling what it will look like a decade down the road.

“There have been a lot of doubters, but there were also a lot of people who supported us when nobody did,” Fiore said. “When I came here, I couldn’t get my son to come to a game. Now it’s to the point where young kids are growing up wanting to be Seawolves, and that’s incredibly satisfying.”

Like in sports, it’s all about teamwork. The coaches put the players in position to win; the players do the work to succeed when in those situations. The facilities are improving and, as a result, so will the level of talent. It all starts at the top, however. Samuel Stanley Jr., was appointed president of the university in July 2009, and Fiore calls their relationship strong and their goals similar.

“He’s been a terrific supporter of the athletic department,” Fiore said. “Our vision is his vision, and vice versa. He wants to have a terrific athletic program, so we’re on the same page.”

Facilities are central among any school’s recruiting effort, and Stony Brook is no different. What’s been key is that the administration has been able to upgrade facilities without calling on Albany. Private fundraising and minimal state money will yield a new $3-million track and field facility to be ready for the spring, a revamped baseball field to be named after its chief donor, Seawolf alum Joe Nathan, the All-Star closer for the Minnesota Twins.

In October, the department revealed plans to construct the $4.3-million Dubin Family Athletic Performance Center, an 8,000 square-foot strength and conditioning facility backed by investor and philanthropist Glenn Dubin. A Class of 1978 alum, Dubin played both football and lacrosse at Stony Brook.

“We’re very humbled by the Dubin family’s support,” Fiore said. “Glenn is a person who invests in winners, and he chose to invest in us because we’re winners.”

At the existing stadium the center will abut, the football program has made giant strides. Ironically, it became the only Division I football school on Long Island when Hofstra, where Fiore played from 1988-1990, dissolved its program following the 2009 season. The windfall benefited a number of schools in the northeast, most notably Stony Brook. This year, Miguel Maysonet and Brock Jackolski, both Long Islanders and Hofstra defections, eclipsed 1,000 yards rushing.

The Seawolves are playing up, too. They open the season with back-to-back FCS opponents—UTEP and Buffalo—next fall, face Army in 2012, Boston College in 2013 and Cincinnati in 2014. This year, they tussled with Meineke Bowl winner South Florida from the Big East Conference. In the words of Fiore, “every great research university has a high-level football program.” 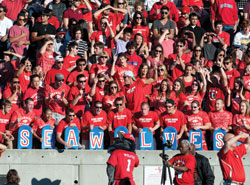 Why take on the stiff challenge? It funds the whole athletic department. Stony Brook received $350,000 for facing USF back in September and it’s been able to put that back into the department, whether the larger sports or softball, soccer, track or tennis.

Stony Brook may not yet be St. John’s in the public’s eyes, but it’s creating a name for itself. Seawolves basketball fans stormed the court when Stony Brook won its first regular-season America East championship with a win over Vermont. Although they missed the NCAA Tournament, the Seawolves nevertheless reached the postseason for the first time as a Division I squad, playing host to Big Ten power Illinois in the National Invitation Tournament in front of a packed house.

“Athletics is a window to the university, and that window needs to be clear and clean and open for people to come in and see,” Fiore said.

Perhaps no team is on the map quite like the men’s lacrosse team, which enters the 2011 season as a legitimate national title contender. Rick Sowell’s squad returns an attack that includes Tewaaraton Trophy runner-up Kevin Crowley and all-time leading goal scorer Jordan McBride. Crowley was named the Pre-season Player of the Year by Lacrosse Magazine. He’ll lead the Seawolves into battle against perennial power Virginia at LaValle Stadium on February 26.

“Coach Sowell’s done an amazing job,” Fiore said. “He’s been able to keep some of the local kids home, and they’ve also gone as far as British Columbia to get guys like Crowley and McBride. A lot of last year’s team is coming back and the crowds have been really good, so the program’s in a really good spot.”

But has Long Island caught on? Has it embraced Stony Brook athletics? Over time, Stony Brook has managed to increase its fan base. In 2000, Seawolves football averaged 940 fans in four home games; this past fall, they drew 4,908 per game. The lacrosse numbers are off the charts. In hosting top-ranked Virginia in last year’s national quarterfinals, more than 10,000 fans were on hand to see Stony Brook fall just short, 10-9. On the hardwoods, this year’s numbers at men’s basketball games are only a slight increase over attendance figures from a decade ago; however, the men’s team is coming off its most successful season and is looking to keep momentum going forward.

What the department has accomplished didn’t happen overnight, and the administration is fully aware that, where they want to go won’t take an overnight trip either.

“Stony Brook’s mantra is ‘very far, very fast,’ and we’ve tried to hang in there with the speed of the university,” Fiore said. “The university’s 53 years old and we’re a top 50 institution. If we keep pulling our oars in the same direction, 50 years from now, who knows what we’re going to look like?”