In the record business, most people know Daniel Lanois as a Grammy-winning record producer. But to call Lanois simply a record producer would not be accurate. He has also worked as a songwriter, an instrumentalist, a singer and a producer on his own solo albums, on collaborations with the likes of Brian Eno and on soundtrack albums. His production methods often find him working as a musical collaborator, as was the case on the most recent U2 album, No Line On The Horizon, which he co-produced with Brian Eno and on which he plays, sings and shares writing credit.

Lanois began as a recording artist on Brian Eno’s groundbreaking ambient albums such as Apollo: Atmospheres and Soundtracks, a collaboration between Eno, Lanois and Brian Eno’s brother Roger, and The Pearl, a collaboration between Eno, Harold Budd and Lanois. Lanois was also part of the Canadian music scene and produced the albums This Is The Ice Age and Danseparc for Martha and the Muffins, a group that included his sister Jocelyne. Lanois’s own albums include his much-loved solo debut, Acadie, as well as For the Beauty of Wynona, Shine and Belladonna. He has also recorded such experimental works as the multimedia Here Is What Is and the multi-disc Omni Series. 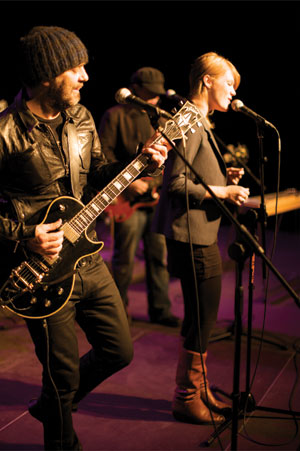 It’s an extraordinary debut that mixes Lanois’s atmospheric production with Whitley’s soulful vocals and the kind of solid rhythm section that comes along all too infrequently in the world of pop and rock. The music on the album is somewhere between the Southern-fried grit of Delaney & Bonnie and a jazz-soul band produced by Lee “Scratch” Perry.

Lanois is a moving target and grants very few interviews. After more than a year-long exchange of emails and phone calls with the various layers of Lanois managers, publicists and team, I was finally able to grab some time with Lanois before a soundcheck on his recent tour in support of the Black Dub album. The past few months have been a hectic whirl that have seen Lanois recuperating from a motorcycle accident, producing and filming the recording of Neil Young’s latest album Le Noise, and attending to all the activities surrounding the writing, recording, rehearsing and touring for the Black Dub project. Black Dub will record its next album in the new year at Lanois’s cottages in Negril, Jamaica, where he has had a place since working there with Jimmy Cliff in the 90s.

I began by asking Lanois how much of an influence dub reggae artists Aswad, Linton Kwesi Johnson, and Johnson’s producer Dennis Bovell had on the Black Dub project. After indicating he was probably more influenced by Lee “Scratch” Perry, he said, “I’m aware that the dub culture of Jamaica came out of the studios. It didn’t come from the street.” He then related a recent long conversation he had with the legendary founder of Island Records, Chris Blackwell on this subject in which Blackwell said that the music was “born in the studio.” Lanois distinguished what he’s doing from dub reggae. “I’ve invented my own little system of dub, not spin dub, but sample dub, not on the fly,” he stated.

In discussing the sound of Black Dub, I brought up Delaney & Bonnie. Lanois responded to the reference by saying. “I’ll take that as a compliment.” In terms of soul music Lanois said, “I like the term soul music. It’s a nice banner to be operating under.”

It was only a matter of time before we began discussing Lanois’s celebrated career as a record producer. He’s co-produced six U2 albums with Brian Eno, including the classic The Joshua Tree. He also co-produced Gabriel’s So and Us with Gabriel. In 1989, he produced Bob Dylan’s Oh Mercy album, which Bono suggested to Dylan. Then, in 1997, Lanois produced Dylan’s Time Out Of Mind, which launched Dylan’s comeback. 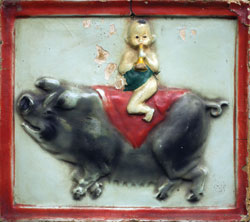 Along the way, Lanois has produced such critically acclaimed albums as Wrecking Ball from Emmylou Harris, Yellow Moon from the Neville Brothers, Teatro from Willie Nelson and fellow Canadian Robbie Robertson’s self-titled, debut solo album after he left The Band. The Robertson album was released the same year as The Joshua Tree and Acadie, the year that blew Lanois’s career wide open. “Robbie decided to go south geographically and go to a place where a lot of the music he loved came from. He’s a great storyteller,” Lanois said. In terms of the production of Dylan’s Time Out Of Mind, Lanois said, “I just decided that the landscape shouldn’t change. It should be like white lines on the road and let the story unfold and be told.” Neil Young presented a unique opportunity for Lanois to not only produce but also film the whole process. “ He wanted to make an acoustic record and he wanted me to film the performances.” Lanois recalled. “Neil just worked under the full moon, so we did four full moon sessions with each session about three days.” Lanois then spent time on his own, “processing the sound and coming up with good mixes.” There was no way to go in-depth about the many classic albums that Lanois has worked on, but in summing up his production methods he said, “I try and serve the vocals. It’s largely making a decision about where the center is. I wish I could tell you there was some kind of radical formula here. I think it’s as simple as this: If they get me in the studio, they’ll at least get the honest truth.”