In Still Life With Woodpecker, Tom Robbins asks an age-old essential question, “Who knows how to make love stay?” He proceeds to answer himself in a series of playful imperatives including, “Tell love you are going to the Junior’s Deli on Flatbush Avenue in Brooklyn to pick up a cheesecake, and if love stays, it can have half. It will stay.” And, of course, there’s my personal favorite, the sublime, “Wake love up in the middle of the night. Tell it the world is on fire. Dash to the bedroom window and pee out of it. Casually return to bed and assure love that everything is going to be all right. Fall asleep. Love will be there in the morning.” While these little nuggets of wisdom most assuredly refer to an interpersonal kind of love (fireworks, fevers and fisticuffs), I believe his question is a good one when we consider love of a different sort. How do we keep the flame inside of us alive? How do we continue to love what we do day in and day out, take pleasure out of our experiences and not grow jaded with work/play/everything? How do we stay happy?

Chris Barron, the 42-year-old lead singer of the multi-platinum band The Spin Doctors, really loves the game of golf these days. I realize this during our recent interview that started at The Golf Club at The Chelsea Piers in New York City. 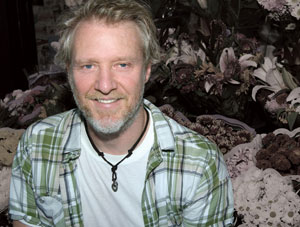 I meet him alone on The Putting Green just outside the entrance and when we go inside to the driving range he explains that it’s the short game that really gets him going. “You drive for show and you putt for dough,” Chris says as he lays one right on the green a foot away from the cup. I begin to notice that there are little tiny metaphors shooting all over the place in the driving range.

When he describes The Spin Doctors as “basically a pop band,” I remind him that it was probably one of the most idiosyncratic pop bands ever to make it to the big stage. Known for a confluence of vibes, personalities and sounds and “deeply rooted in funk, blues, jazz and country,” the Spins were our city’s rock band, the local heroes who made it big but kept it real. They were “careful to keep the feeling of the influence but not be the influence,” Chris says and goes on to describe a recent art exhibit at The Met featuring two masters, Velasquez and Manet, who inspired each other so much without being each other. The Spin Doctors made us dance with funky booty-shaking goodness, made us revel in scorching solos and inventive improvisation, and warmed us up with tiny gems of poetry. And best of all, they were like us; they were real people with real personalities who wanted to connect with their audiences. I remember Chris peeling oranges and handing out pieces to the crowd during “Forty or Fifty,” a deeper cut off of Pocket Full of Kryptonite, at Sparks one night on Deer Park Avenue. When they made the cover of Rolling Stone, I probably wasn’t the only person who said, “Hey, that guy gave me an orange during his set one night.”

Although The Spin Doctors are still together—they have ten gigs or so in the next year and Sony is planning a special vinyl release of Kryptonite on the 20th anniversary of its birth—they experienced a serious tectonic shift in their progress in 1999. Bell’s Palsy is a neurological condition that usually freezes the muscles of the face. After experiencing a sudden vocal loss, Chris Barron was diagnosed with a rare form of vocal cord paralysis caused by Bell’s Palsy. He was told that he might never be able to sing or talk in the same way ever again. The Spins stopped playing. For Chris, the world stopped turning for a bit.

When Chris talks about this period of his life, he does so with uncanny openness. “My voice has always been a mule,” he says, “so when I couldn’t talk for a full year in 2000, the sense of dismay I felt was tough.” But friends’ and fans’ “outpouring of heartening sympathy” for the singer was incredibly healing, and after intensive additional vocal training, Chris was back at it again, this time making music on his own and in collaboration was other songwriters including former BMI executive and Long Islander Jeff Cohen, whom Chris refers to affectionately (and reverently) as “the man.” He started playing gigs again in various incarnations—with friends, solo, trying out standards, playing ukuleles and anything else that…well…made him feel happy and grateful.

I remember one of these shows because I opened for Chris. It was at the now-transformed (in)famous Nightingale’s in the east village, the early home of fellow roots rockers Blues Traveler and a host of other nineties NYC acts. I remember how excited I was to hear Chris flex his lanky tenor and croon the night away, and how excited Chris was to be singing again, without a hint of rock star pretension, playing music as if he hadn’t just been on the cover of Rolling Stone or opened for The Stones, playing music out of pure love. Chris recalls a sense of “service” that overcame him when his voice returned, a sense of service that prompted him to think “I will use my voice for good…I’ve got nothing to prove.”

While The Spin Doctors were all about the jam, all about the search, Chris Barron’s solo material, which is in many ways Chris Barron the singer-songwriter, is all about the celebration of life and music. His latest offering Songs from the Summer of Sangria is released under the nomenclature Chris Barron and The Time Bandits and features a sweet collection of tasteful musicians with lots of old school chops and admiration to support Chris’s new compositions. “The Band is home base,” he says, citing musical inspirations and influences, and calls the record “Exile on Main Street meets Last Waltz.” Crank up “Phony,” the EP’s chunky second track, and you might even hear a little bit of Matthew Sweet and ZZ Top mixed in with “Gimme Shelter.” The last song, a simple and reflective acoustic piece is sparse and lovely, and Chris’s voice alone in the night sky of minimal accompaniment forces us to really think deeply about just what it was that he had to go through, how hard it must have been. Remarkably, while being less adventurous than the musical stylings of his more popular band, Chris manages to be more ambitious as a writer. He drops a coin into the jukebox of music history. There’s an embracing of all that is universal about music in these new songs. There’s less idiosyncrasy and more straightforward love and appreciation for the gift that allows us to make it.

I imagine Chris listening to all of these aforementioned artists and more while crafting these songs and getting really specific about what he’s referencing, but when I ask him about it he pauses. “A lot of the time most people spend listening, I spend playing,” he says, and I remember The Spin Doctors’ 300-date odysseys across the country and the world.

And he’s still traveling, with recent jaunts to Iraq, Spain and Norway to promote the new stuff. It’s a kind of unwritten philosophy this endless transition from one place or thing to the next for musicians like Chris, a philosophy that may seem unconvincing and tiresome to some but life for others. Chris searches for the Italian philosopher Giordano Bruno’s name in the Rolodex of his mind as we get ready to leave the pier and take some photos in the gritty grandeur of Manhattan sidewalks and bodegas. He paraphrases: “If a philosophy doesn’t provide solace, then its worthless, right?”

We can all learn a lot from Chris Barron. He is, in a way, living evidence of how to make love stay. Perhaps it’s giving up the thing we love most in this world or, rather, having to give it up for a while in order to have it again that makes us grow closer to it. How wonderful it is that through a forced silence, one can arrive at blissful noise. How wide and knowing and deep the smile of the Buddhist monk is during silent meditation. How thankful we all can be. How thankful we all can be.

Before we leave, I ask Chris one last question. I want to know about the most memorable experience he has had with music on the road. Moments that he’s on stage don’t count. It’s a bit of a peculiar question at best, I admit, but I’m always curious about what happens when we put our guitars down, when the music’s on but we’re not the ones playing it, so to speak. “Oh, that one’s easy,” he says. “The Spins were backstage on the tour with The Stones. We were hanging out with Keith Richards and some of the other guys. I was on the floor watching these older dudes, these legends, just being silly with each other and kidding around. I turned to Keith and said, ‘It’s so great that you guys are just having fun.’ And he smiled and came back with ‘Sure man, why else would you do this?’ It was an awesome moment, and in my enthusiasm, I responded, ‘I want to do this for the rest of my life,’ to which Keith replied ‘You will, man, you will.’ I felt knighted that day. If Keith Richards said I was going to do this for the rest of my life, then it was all settled.”