It’s not a stretch to believe photographers are inspired by scenes before them. For photographer Bastienne Schmidt, it’s a little different. The idea comes first and images follow as explorations. Shifting the inspiration process is serving her well. Ms. Schmidt’s fourth photography book is being released this month following its German release in October 2010. 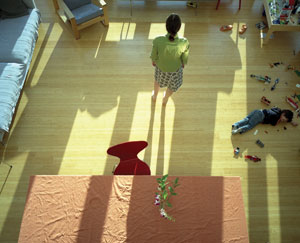 The book, Home Stills, visually explores feelings not ordinarily associated with motherhood—isolation, disconnection and escapist fantasies among them. After having her first child, Ms. Schmidt was struck by the contrast between society’s contention that being a mother was its own reward against the reality of isolation, identity-shifting and the intense demands of caring for an infant.

Surprised, she decided not to flinch. Instead, Ms. Schmidt became determined to document her experience while searching for something universal about the experience of being an American woman.
“I feel like I’ve come full circle,” said Ms. Schmidt. “For my book Vivir la Muerte, I wanted to prove I was as tough as a man and could go anywhere they could go and work, even though it was sometimes dangerous. For Home Stills, I decided to look at women’s lives. I wanted to draw conclusions about universal themes and explore what it means to be female.”

Ms. Schmidt began her photography journey like she had before. From the start, she knows the photographs are being made for a book. Images for exhibitions come from those found in the book and those that weren’t strong enough to develop the book’s themes. 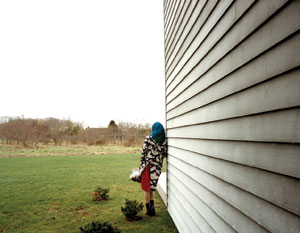 For instance, following the death of her father, Ms. Schmidt wondered about how people say good-bye to loved ones. This led to curiosity about burial rituals. Traveling increased her awareness that different cultures have different burial traditions. Ultimately, Ms. Schmidt’s photographic journey led her to multiple Latin American countries whose death rituals became the focus of her book, Vivir la Muerte. The book won awards and images have been exhibited in galleries and museums.

Ms. Schmidt’s experiences of being born and raised in Germany and moving to America as a young adult led to two different books. Both bring the eye of an outsider who is there to document and comment on contemporary conditions. Her book, ShadowHome features photographs of Germany. American Dreams captures scenes and hopes across America. Both books explore identity through people and places photographed by Ms. Schmidt.

Each book takes around four to five years. This span of time is necessary to allow themes to develop and ideas to bloom and grow. 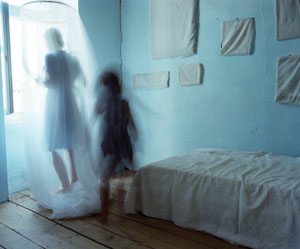 Home Stills is a departure of Ms. Schmidt’s prior working styles. The most striking difference is that Schmidt has turned the lens on herself. She is featured in all the photographs in the book’s first section. The second section, “Film Stills,” highlights women found in movie stills cloaked by sheer fabric, doilies, torn paper and more. Taken together, the book explores roles embraced and shed by women as life moves from birth to old age.

Home Stills is also the first time drawings made by Ms. Schmidt have been included in a publication. There are 25 drawings and 60 photographs in the book.

Even though Ms. Schmidt is in all the photographs, they are not necessarily autobiographical. Costumes and situational compositions are created to make images with implied narratives. Most are solitary scenes featuring Ms. Schmidt. Sometimes family members are included in the photograph. In this way, Ms. Schmidt is working in the tradition of photographers, like Cindy Sherman, who use themselves and/or family members as subjects to channel the human experience.

Home Stills images and other artwork by Bastienne Schmidt can be found at bastienneschmidt.com. She lives in Bridgehampton with her husband and fellow photographer, Philippe Cheng, and their two sons, Max and Julian.