Everyone has a bucket list, whether you’re Bill the Shoemaker or Bill Gates. The question is: What’s on it? More importantly, how long do you have to get it done? Well, our very unscientific assessment of great things to do on Long Island—some wild, some modest, some a little dangerous—is meant to be your official guide to the best 2011 possible. Right here. Right now. The initial list featured hundreds of things to do and presented here are our favorite fifteen. Done some already? Come up with an alternative (and let us know). Think of something we missed? Tell us. What do you win? Bragging rights. And if you’re the first one to complete them all, maybe we’ll hook you up with something mighty fine, too. But really, you should do this for you. And for the truly adventurous, we even have some off-Island hunts.

No. 12: Fly Like an Eagle
If you want to experience the feeling of flying, but would rather stay in your seat, Sky Sailors Glider School at Gabreski Airport in Westhampton Beach provides the experience of a stately airborne glide in this unique aircraft. Gently coast over the East End in a virtually soundless glider. Time will seem suspended as the coastline and inner landscape turns slowly beneath you. Best time to go: Autumn, just as the first fall foliage kicks in and the weather is at an optimum. skysailors.com.
Glider photo by Jan Hebnes 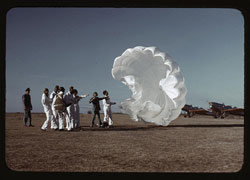 No. 88: Skydive
You know the deal; you jump out of a perfectly good airplane. It’s not just fun; it is the thrill of a lifetime. Capture the feeling of letting it all fall away, literally. Skydive Long Island in Calverton and Long Island Skydiving in East Moriches are the destinations for this unreal experience. The first jump is a tandem, where you are securely strapped to an instructor. After around seven tandem jumps and thorough ground instruction, you can jump solo. The base price is a little over $200 for each jump. skydivelongisland.com, longislandskydiving.com.
Photo by Arthur Rothstein 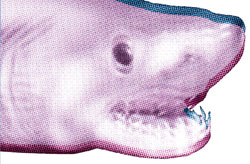 No. 67: Shark Fishing
Channel you inner Frank Mundus (the real-life inspiration for the salty dude from Jaws) and take to the sea out of Montauk for some serious sharking. Sportsmen claim it’s the ultimate over and underwater experience. You couple the thrill of a seriously monster hunt with basic fisherman oneness with the deep. And, it’s a beautiful day on the water to catch your next big meal. Montauk is still a Mecca for sharks and plenty of other big fish, and has charter boats aplenty. Check out Montauk Fishing Charters, touting the widest variety of fast, comfortable sport fishing boats in Montauk Harbor. Book early, spots fill up fast.
montaukfishingcharters.com.
No. 23: Learn to Surf

Admit it, you’ve been jonesing to tap your inner hang-back surfer thing ever since you can remember. Surfing takes balance, concentration, bravery and savvy. And chill, super Zen-harmony with the big deep—so check your type-A crap in the parking lot. While it is not Australia or Hawaii, there is sizeable surf culture on LI and waves to ride, and a little guidance from Skudin Surf surfing school with locations in Long Beach and Rockaway Beach might get you there. Maybe you’ll even have a little of the dudeness left over for Monday morning. skudinsurf.com.
Surfer photo by Roger Kirby

No. 17: Bethpage Black
You watched Tiger and Phil battle it out here and maybe you even played a weekday afternoon on either the Red, Blue, Green or Yellow course. But ever teed off in the prime of morning on a Saturday in the summertime on the Bethpage Black? You may have to sleep in your car, but it’s worth it.
Golf course photo by John Williams.

No. 72: Baseball Scavenger
For the cost of bringing your family to see one Mets or Yankees game, you can make a three-day weekend out of hitting all of the local minor leagues teams. Start with a Friday night Brooklyn Cyclones game at their cool park in Coney Island. Then go to Staten Island on Saturday to watch the Yanks’ Class A affiliate at their gorgeous field with the backdrop of Manhattan. And don’t forget the Ducks—head to Central Islip on Sunday afternoon to catch this independent minor league team.
Baseball field photo by Ariele Goldman 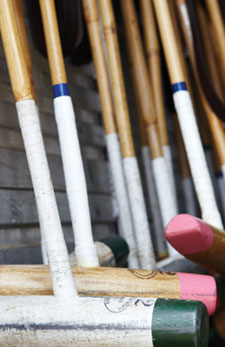 No. 25: Learn to Play Polo
The mounting of a noble steed for war or sport has a long and storied history in world culture. One of the earlier iterations of this tradition is polo, a fast-growing sport on Long Island. The circuit long ago made Southampton a staple, as did the weekend warriors cum socialites. But Meadowbrook Polo Club in Old Westbury, the oldest polo club in the US, is not just an authentic Argentine style trend spot for gorgeous afternoon outings; they offer personal lessons for individuals and groups. meadowbrookpolo.com.
Polo photo by Gary Lupton
No. 93: Catch a Rising Star
Do some serious stargazing at the Custer Observatory in Southold. Unlike most of LI, which is riddled with too much ambient light, a blanket of stars and celestial objects are visible and vivid there. Start the day early with a visit to the area’s renowned wineries. North Fork Wine Tours offers many types of day trips with tours of four or five wineries and wine tastings. Best part: Someone else does the driving. Between the wine and the stars, you’ll catch your inner Galileo, just as if you were in Italy. northforkwinetours.com, custerobservatory.org. 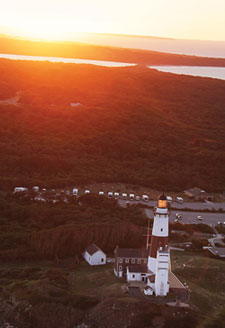 No. 51: Say, “I (re)Do”
Celebrate love at “The End” this summer by renewing your wedding vows. Sound crazy? Too sappy? Maybe. The good news is it’ll be better than last time—no blushing bridezilla sweating the details, you can renegotiate those first-time terms and best of all, your friends are older, which means better gifts. All of this equals one great party. May we suggest The Montauk Yacht Club? Guest lists of up to 1,000 can be accommodated and amenities include watersports, world-class cuisine, boat trips and luxurious pampering at Spa MYC. montaukyachtclub.com.
Montauk photo by Kenny Janosick 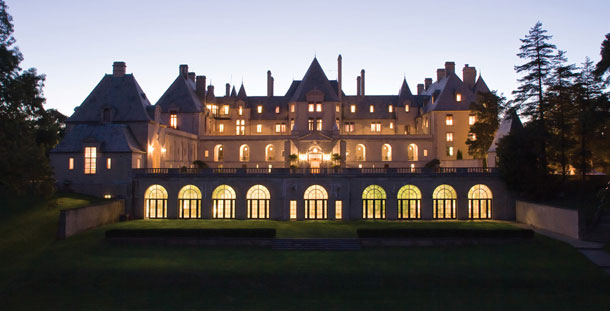 No 18: Swell Like a Rockefeller
We people have been lusting after luxurious abodes since time immemorial, filling our homes with the finest decoratives possible. And while you need to get on a plane for the likes of Versailles, you can travel back in time to the era that inspired The Great Gatsby by visiting some of the most extravagant Long Island mansions. There are over 500 historical sites (hint: We have our own castles) that were once privately owned and collectively responsible for getting Long Island its status among the most elite places in the country. Spend a day tasting the good life. Or rent one of the locales and throw yourself a party or organize a family reunion. Best time to visit: May, when the historic mansions host a month of open houses. historiclongisland.com.
Photo of Oheka Castle by E. Kaufman 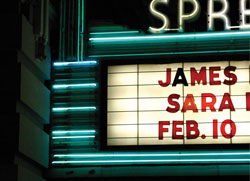 No. 34: Train Ride to Canada
It’s ok to get off the Island sometimes. And a romantic, leisurely train ride to Canada along the Hudson River Valley and through the mountainous wilds of upstate NY is one of the best ways to do it. There are two trains to The Great White North—the Maple Leaf to Toronto run by Amtrak and VIA rail, and the Adirondack to Montreal. Both trains leave out of New York’s Penn Station. Along the way, you’ll see some of the most stunning vistas imaginable—this line has often been considered one of the best train rides in the world. And better than that lovely but misbegotten Anna K., you can enjoy all the modern luxuries on yours roundtrip. For more information and to book tickets visit amtrak.com or viarail.ca. Best time to go: Early to mid fall as foliage peaks farther north.
Photo courtesy of Amtrak 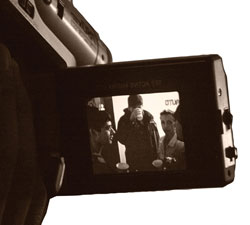 No. 71: Be a Movie Extra
If you’ve ever watched a movie and seen the hundreds or even thousands of people in the background of a film scene, one of those people could be you. It’s as easy as going to moviex.com (the #1 extra casting site on the web) and registering. Your profile will be viewed by talent agents and casting directors who may choose you to be part of that big-time movie in the making!
Camera photo by Can Berkol 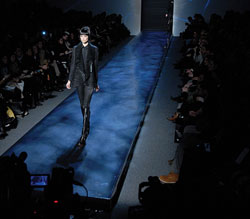 No. 98: Crash Fashion Week
New York hosts two Fashion Weeks a year when you can sit amongst some of fashion’s elites, icons and celebrities while getting a preview of the world’s best designers and the newest trends. Not in the industry and can’t get tickets? Crash, it’s easy—look bored and like you belong there, then cattle your way through with the crowds. At check in, give a name that sounds important and claim your assistant registered you. It might not work every time, but it’ll be worth it if it does. February previews fall 2011 and September previews spring 2012. For more information, visit mbfashionweek.com.
Fashion photo by Christopher Wells 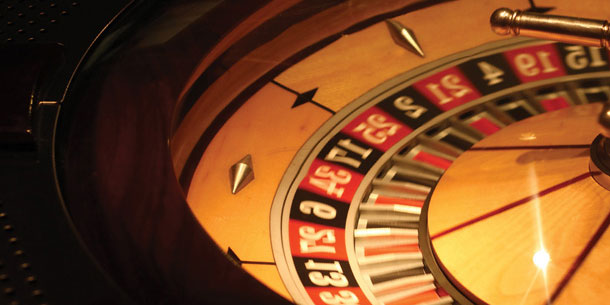 No. 8: Put It On Black (Or Red, Or a Number)
Admit it, nothing feels as empowering as throwing money away. Here’s how: Squirrel away 5 dollars every weekday, for 100 bucks a month. You won’t miss it. Then in September or October, take your grand to Atlantic City and bet it all in one shot. You can be “safe” and put it all on red or black and try to double your money, but why not go nuts and drop it all on your birthday? If you lose, well it was money you would have spent on coffee or lotto tickets anyway. But if you win, you’ll feel like the big (wo)man of the night. PS, we want a cut of that $35,000.