Imagine standing at the top of a ski run, a blanket of untracked powder spread below you. There’s no competition to score first tracks. No threat that the powder will be gone or tracked out. No rush to score first chairlift in the morning. Because it’s just you and a few of your closest friends, in a stunning alpine environment, with nary a lift line in sight. Why? One word: Backcountry. The land of ungroomed, untracked natural snow.

Normally, this is the domain of the backcountry skier—they earn their turns; they climb under their own power, on their own two feet; they search for remote powder runs to call their own. It’s a skiing form of sweat equity that pays sweet dividends to those willing to put in the effort.

For the resort skier looking to get beyond the chairlift, there’s another more inviting way to go. Meet snowcat skiing and heliskiing.

Heliskiing is just what its name implies. You use a helicopter to access your ski runs. It has the advantage of accessing remote runs in a short amount of time. But you pay for that access. The average cost to heliski hovers around $1,000 per person per day. (In other words, the prices are potentially steeper than the runs you’ll be skiing.)

A snowcat may be less familiar to resort skiers. It features a heated, enclosed cabin and a twin set of tread tracks designed to move over snow. If you’ve ever seen a grooming machine at your favorite resort, you’ve seen one kind of snowcat. But other versions are made with another purpose in mind—to move people and get them into the backcountry. Cat skiing is sometimes called “poor man’s heliskiing.” And it is less expensive, to the tune of $250-$450 per person per day. (Relatively affordable.) But you have less range and snowcats move slower than helicopters. Then again, snowcats don’t get grounded, as choppers do, when the weather clamps down, so they have their own advantages.

Either way, depending on the outfitter, the vertical per run, and other factors, you’ll typically log 7-12 runs per day, totaling at least 10,000 vertical feet of descent. No matter your mode of transport, there are two constants—the convenience of mechanized uphill transport to the top of the runs, coupled with the semi-exclusive nature of backcountry powder visited by few others. It’s the best of both worlds.

This is your guide to skiing with a foot in both worlds. But be careful. It’s addictive. You might be tempted to leave the lifts behind altogether, if your wallet can afford it. No matter how you get there (cat or heli), and where you go, it all comes down to one thing—powder. 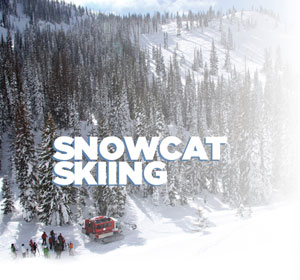 In the East, the choice is obvious for where to go, mostly because the list is short.

Cabin Cat Adventures, Sugarbush, VT
sugarbush.com
Sugarbush Resort, in Vermont’s Mad River Valley, is home to the only cat skiing in the eastern US. Unlike every other operator in this list, the cat skiing takes place within the ski area’s boundaries. But don’t necessarily hold that against it. SKI magazine recently named Sugarbush #1 for terrain variety, a major plus. The snowcat is known as the Lincoln Limo, named for one of the resort’s mountains. The First Tracks cat runs on powder mornings. If the forecast calls for snow, reserve a spot in the cat the afternoon before. If it dumps overnight, the cat will run, meaning you can score one or two runs on the mountain before the lifts ever start spinning for the general public. It’s like having the mountain exclusively to yourself. Which you can also do in April at Mt. Ellen, one half of Sugarbush’s twin mountain experience. When the lifts at Ellen close for the season in late March, you can spend an entire day cat skiing with friends on the still-very-snowy upper reaches of the peak.

Catski Safari, Massif du Sud, Quebec
massifdusud.net/catskisafari.asp
Beyond Vermont, the other cat skiing to be found in eastern North America is just to the north, in Quebec. Roughly halfway between Quebec City and the Maine border, you’ll find Massif du Sud, set within a large regional park of the same name. Here it’s all about gladed backcountry skiing near the resort (but beyond its boundaries), with lunch in a backcountry yurt to round out the experience.

Ski Chic-Chocs, Quebec
skichicchocs.com
Cat skiing the surprisingly alpine Chic-Chocs and McGerrigle mountains of Quebec’s Gaspe peninsula is a true backcountry experience. You won’t find a lift or ski resort for miles in any direction. Ski Chic-Chocs runs its trips in the Chic-Chocs wildlife reserve, adjacent to Gaspesie provincial park. It’s an area of above-treeline skiing, glacially-carved cirques and the possibility of avalanches (not to worry—you’ll have trained guides to assess terrain and conditions, and you’ll wear a beacon). Their primary operating area is a valley known as Mines Madeleine, where—on a clear day—you’ll enjoy jaw-dropping views of craggy, flat-topped Mont Albert.

Beyond the Northeast, your options open up considerably in the lower 48. You can’t go wrong with any of the following:

Steamboat Powdercats, CO
steamboatpowdercats.com
These days, Colorado has roughly a dozen snowcat operators, with several operating in some very scenic and very snowy places. Arguably, the crème de la crème is Steamboat Powdercats. Their operating area near Buffalo Pass above Steamboat Springs is consistently one of the snowiest in the state, to the tune of 500 inches of annual snowfall. Throw in knowledgeable guides, free use of powder skis (most others will charge extra), a hot lunch cooked by your guides and served in a mountaintop log cabin, a CD of high resolution digital images from your day to take with you, and some of the best aspen glade and pillow skiing anywhere, and you have snowcat heaven. Book your trip. Now.

Cascade Powdercats, WA
Cascade is Washington’s only snowcat outfit. As a result, you’ll share their 1,900-acre operating area in the north-central Cascade Mountains with just 10 skiers and two guides, an enviable skier-to-acres ratio. You’ll spend the day skiing Windy Mountain, Windy Ridge and Captain Point. Around mid-day, recharge your batteries with lunch at a mid-mountain yurt a few miles from the Stevens Pass Ski Area, before charging hard all afternoon in their 450 inches of average annual snowfall.

Park City Powder Cats, UT
pccats.com
Not surprisingly, Park City Powder Cats is located near—you guessed it—Park City. There, in the Uinta Mountains, you’ll find 400-plus annual inches of Utah-light powder. If Cascade’s 10 skiers and two guides in 1,900 acres sounded enticing, try this on for size: Park City Powder Cats boasts a 42,000-acre operating area at the private Thousand Peaks Ranch. No, there’s not an extra zero in that number.

Pacific Crest Snowcats
pacificcrestsnowcats.com
The clever slogan at Pacific Crest Snowcats reads, “Why ride used snow?” Take their advice and sign on Lake Tahoe skiing at its finest. Founded by a snowcat and heliskiing veteran from Alaska, Pacific Crest will deliver the goods, located in 3,000 gorgeous acres nestled between the Squaw Valley USA and Sugar Bowl resorts. 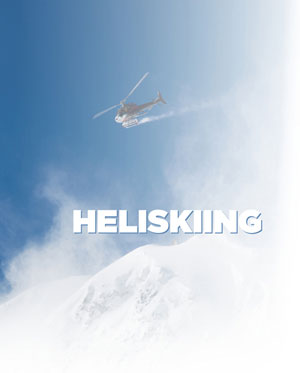 Though eastern North American once had at least one heliskiing operator, these days you’ll have to head west to score the goods.

Telluride Helitrax, CO
helitrax.com
For a long time, Telluride Helitrax was Colorado’s sole heliskiing operator (it’s still the big shot in town). It operates in the rugged San Juan Mountains of southwestern Colorado, in terrain ranging from 10,000 to 13,500 feet, some of the highest in the contiguous US. Based out of Telluride, one of Colorado’s most gorgeous and quintessential ski towns, you’ll be far from everything (except epic skiing). Plan to hunker down in this town that’s equal parts Aspen, Crested Butte, and Steamboat Springs, and explore the resort while you’re in town.

North Cascade Heli, WA
heli-ski.com
True to its name, North Cascade Heli operates in Washington’s North Cascade Mountains, also known as “America’s Alps” (and with good reason—they feature glaciated, jagged peaks). The North Cascades are as postcard-perfect a backdrop as you could ask for. With a 300,000-acre permit area, and runs with up to 4,000 vertical feet in one shot, every ski experience you have thereafter will have a hard time measuring up.

High Mountain Heli Skiing, WY
heliskijackson.com
High Mountain Heli has been around since 1974, which was pretty much the beginning of heliskiing in the United States. An outfit with that kind of longevity says something about what they’re offering. Like Cascade, a 300,000-acre permit area, mostly south of the famed Jackson Hole Ski Resort. The Snake River, Palisade, Teton, Hoback and Gros Ventre mountain ranges are all part of your playground. Enjoy accordingly. 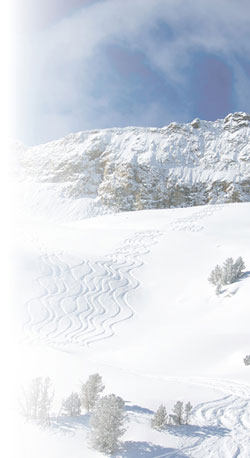 Heli skiing in Nevada? And not at Lake Tahoe? You bet. The Ruby Mountains might be Nevada’s best kept secret. The mountain range is tiny by most standards—just 10-12 miles wide and 60 miles long, with 10 peaks over 11,000 feet. They’re in the northeast corner of Nevada, far from pretty much everything. Except, of course, stellar heliskiing with a company that’s been around for 34 years. (Ruby Mountains Heli also has a snowcat in the event that weather grounds the chopper. Nice to have that in your back pocket.)

Wasatch Powderbird Guides, UT
powderbird.com
Based out of a heliport at Snowbird Ski and Mountain Resort in Little Cottonwood Canyon, east of Salt Lake City, WPG was founded in 1973, making it the granddaddy of the bunch (along with a handful of others, including some in this list, that first spun their rotor blades in the early 1970s). There are only four things you need to know: Utah’s legendary powder; the Wasatch Mountains; 11,000-foot peaks; and 500 inches of annual snowfall.

Pacific Crest Heliguides, CA
pacificcrestheliguides.com
Pacific Crest Heli is the newest kid on the block, taking off for the first time this season. It’s founded by the same folks behind Pacific Crest Snowcats. But instead of a 3,000-acre operating area between Squaw and Sugar Bowl, you’ll access a 100,000-acre operating area north of Lake Tahoe, between Donner Summit and Sierra Buttes, along the namesake Pacific Crest. Though PCH doesn’t have the track record of other heli operators, its long-standing snowcat success and new heli-accessed terrain promise great things.