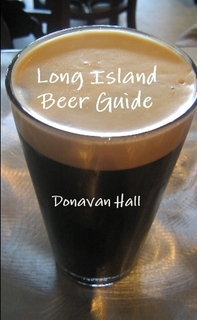 This, the second version of Long Island Beer Guide (first was published in the summer of 2008), features extensive and updated information on Long Island’s continuing craft beer expansion, including newsies breweries and bars and beverage centers. Also includes Brooklyn and New York City words and sentences, too.

Here is additional information from Hall on Long Island Beer Guide and what he aspired to achieve with his pocket-sized project:

The first edition was a more personal view of Long Island craft beer spots. I wasn’t trying to be comprehensive. My purpose was to give people something to read and maybe inspire them to visit the best spots for craft beer.

The second edition aims to be more comprehensive. Also, I’ve added chapters for Manhattan and Brooklyn. There’s a whole chapter devoted to beer cocktails. Plus I’ve expanded the “Craft Beer Companion” chapter, adding more articles on why drinking craft beer is important for the future of the human race.

I also view the guide as a historical document. It’s a snapshot of brewing right now on the Island. As I continue to update the guide, we’ll be able to see how we’ve grown from a place with only a few breweries and craft beer bars, to a giant, heavyweight brewing region with hundreds of tiny breweries doting one end of the Island to the other.”