Jake Incao is back in the game.

The Long Island songwriter has always known music was his passion. Jake grew up on Elvis, Bruce Springsteen, and Michael Jackson. At fifteen, he got an acoustic guitar, but taking lessons didn’t seem to be for him. He had no attention span for it, preferring to work on creating his own music instead. “Stripped down to the core,” Jake says, “I’m a singer-songwriter with an acoustic guitar.”

Jake’s music has a sound that is both raw and well-crafted. His voice and his songwriting can be gut-wrenchingly to-the-point—but like Springsteen, there’s always something uplifting in his music too.

Life got in the way of Jake pursuing his dreams last year, when he had to check into rehab for a month and undergo two heart procedures. Now that he’s clean and healthy, Jake Incao is ready to take on the world.

His current major project is a forthcoming album he’s been working on for some time, The Apocalypse. Apart from that, he’s also found a lot of joy in collaborating with other musicians—from his band, Jake Incao and The Common Thieves, to more hip-hop-oriented folks, like Lunchbox Beats or the singer/songwriter home of 27 Productions. Jake has also recently begun writing with his friend Chris Rooney. Rooney would compose a piece of music and Jake would come in and write the lyrics and melody. “That was a new adventure for me in a sense,” Jake says. “I wasn’t writing the music, he was writing the music, and it just felt really good to focus solely on the lyrics and what I wanted to say.”

Ultimately, Jake is now ready to run in any direction that music takes him. He’s playing this Friday, February 11th, with his band The Common Thieves at the Bitter End in NYC. He also plays solo/acoustic dates around Long Island pretty regularly. The best ways to find out where he’s playing are to check out his website at http://www.jakeincao.com/ and to “like” his Facebook page at http://www.facebook.com/jakeincao . 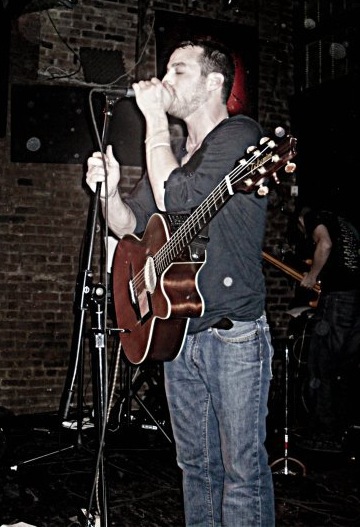