Southampton Publick House’s annual Russian Imperial Stout release party in January is an afternoon event that starts while afternoon jaw-drools in Stage 3 NREM, with craft beer enthusiasts and brew traders arriving at the microbrewery-restaurant as early as 4:00AM to secure a position in line and eventually, a hand-numbered order slip with the day’s goodies.

Here was the line at 7:30AM (cosmicevan’s Photobucket): 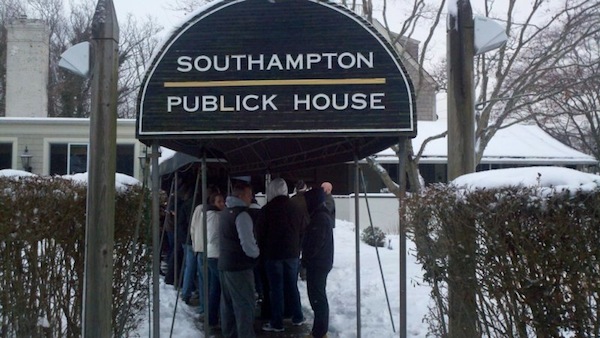 If anyone has a bottle of anything they would like to share, don’t hesitate to offer. Big hugs, promise.

Here is a detailed account of the Russian Imperial Stout release party, courtesy of lostsurfer189’s tumblr:

Me and my buddy got there about 2am the morning of, and crashed until about 6:30am. Woke up and went straight to the brewery, got there about 7am. There was a line already! Turns out I was #49 to show up for this, which is shocking. Even more shocking, people were there at 4am just to be first, and even more amazing, the people behind us were from PA, they woke up at 3am to drive to this. One word, dedication. The people I met at this place were all beer geeks just like me! Great people to talk to, and waiting in line wasn’t that bad despite the cold, time flew just talking about and drinking our favorite brews in the snow.

So 9am rolled around and the line started moving, they handed out slips, which had numbers on them, which told you where you were in line as well as a list of all the beers that were available, some brand new and some were the year round beers but they were vintaged which is awesome. The list of beers and the bottle limit per customer goes as follows:

So safe to say, there was a lot to choose from, I’m not going to share prices with you all, because…well I don’t want to be reminded of how much I spent there, twas quite a bit but all worth it.

Alright so back to the story here, we got our sheets at 9am. Then we came back at about 11, when the brewery opened. Guess how long the line was!? Really long but it was irrelevant because being #49 I got to jump pretty much the entire line, imagine all the dirty looks I got as I went past all these people who weren’t sure if they were going to get the beer that they wanted. But to hell with them, they probably slept in!

Finally got to the door and they handed me the sweetest snifter glass (for free!) which was great then walked in and the place was packed. Waited in like with a Russian Imperial Stout in my hand which was delicious in every way humanly possible. I’ll have a review up for you guys soon. Finally got to the front where you pay for everything and the pretty blonde girl up front convinced me to get a t-shirt and another glass. Damn smart marketing people over at the Publick House….But I got my case and pretty much the entire day was made for me.

We decided the taproom was crammed and went inside the eating area and had some lunch, as well as enjoyed all of the rare stuff on tap! Including the barleywine, saison black, saison faucille and the RIS! They didn’t have the Peconic County Reserve on tap which I was a bit bummed for, but it was a great time. I got a lot of my favorite brewery’s rare beer, got to meet and talk to a lot of great people. If you guys are around next year you should all come and meet me! I’ll be there! Southampton Publick House, if you read this ever, kudos, you know how to throw a good release party and brew some damn fine beer!