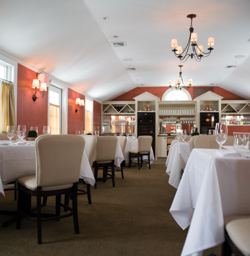 Mirabelle, arguably the best restaurant on Long Island, continues to evolve. It moved from its longtime digs in Saint James to the Three Village Inn in Stony Brook about two years ago. There it opened a casual tavern/bistro in addition to the more formal dining room next door. When I visited, French Master Chef Guy Reuge and his wife Maria, who presides over the smooth-running dining rooms, were readying an upscale cafeteria of sorts for the faculty and staff at Stony Brook State University and considering the possibility of establishing a new Italian restaurant in Cold Spring Harbor in a building recently acquired by their employers, the Lessing’s Hospitality Group.

But the major move at Mirabelle in Stony Brook involves three new menus in a book-like format. One offers the standard á la carte choices, a second is a new $35 three-course prix fixe dinner and the third is the piéce de résistance grand tasting of nine courses for $90 (add appropriate wines with each course and the price becomes $145). 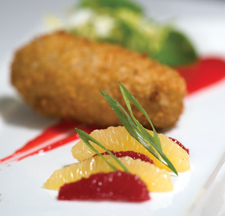 A recent á la carte diner was blessed with ambrosial foie gras with a poached pear and chanterelles ($24), a dense, fudgy chocolate cake ($9.50) and an oldish, strong-tasting striped bass ($31) that was disappointing. But the big bopper is that nine-course extravaganza that’s being ordered by 15-20% of Mirabelle’s customers. There were no disappointments in the nine-course tasting meal chosen by the chef that night. Among the many high points: A garlicky sausage in brioche paired with a refreshing radish salad; the foie gras starter mentioned above; a creative fricassée of scallops and monkfish in a frothed chorizo bath dotted with tangy chorizo slices; a veal medallion in a sauce chasseur accompanied by potato gratin and haricot vert; and an array of cheese selections from Italy, California and the Netherlands.

Add the understated elegance of Mirabelle’s main dining room (red roses, a fireplace, candles, glistening top-lighted mirrors, the tinkling of soft piano music) and you have a memorable dining experience. 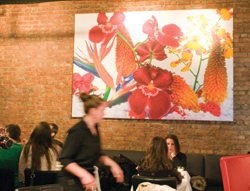 Lola, in Great Neck, is not for the faint of heart or taste buds. Rather, it reaches out to adventurous diners. Internationally-acclaimed Chef Michael Ginor has created a menu that features a clever, creative marriage of disparate, diverse ingredients with bold, eclectic, American, Asian and French touches. His dishes are also seasonal, stylish and sustainable. Stylish too is Lola itself. This lovely, pretty place that replicates many dramatic Manhattan venues features brick walls, gleaming polished wood floors, a black pressed tin ceiling with industrial type exposed ductwork, red leather upholstered booths, high backed red leather chairs, a sharp bottom lighted red glass bar, white drop lights and red inlaid church door-shaped back lighting as well. A jumbo, in-your-face orchid painting almost dominates the dining room. Conviviality reigns in that dining room, which, when full, is a tad too noisy from its very sleek but mostly hard surfaces.

Thankfully, the motion pictures projected onto the restaurant’s back wall are shown without their soundtracks (they were all cartoons one Saturday night).

The year-and-a-half-old Lola, located next to the Clearview Squire Movie Theater is foie gras heaven with no less than seven dishes harboring seared, pan-seared, roasted, shaved and torchons of the creamy, rich, luxuriant gourmet treat. And why not? Mr. Ginor and a partner own Hudson Valley Foie Gras, a modern, high-tech, scientifically-advanced producer of the Moulard duck preparation. In addition to his foie gras business, Michael Ginor has quite an impressive and unusual résumé. Besides winning a batch of culinary awards and spearheading many a charity event, workshop and demonstration, he was a Wall Street senior vice president of David Lerner Associates and a Captain in the Israeli Defense Force. 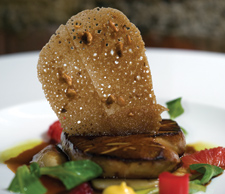 It’s often possible to know all you need to, even before a restaurant’s first course arrives, from its bread. Mass-produced bread from a commercial bakery says one thing and Lola’s feathery loaf of focaccia right out of the oven, alive with olive oil and dotted with savory herbs, says quite another. That memorable bread and the abundance of foie gras on the menu is (or should be) a signal to knowledgeable diners to throw caution to the wind just as Mr. Ginor has with his always innovative, sometimes whimsical, creations. In other words, go for it. Let it rip. You are eating at Long Island’s King of Foie Gras so order some of this magnificent melt-in-the-mouth treat. It, like most dishes at Lola comes with dabs of diverse accompaniments that complement and transport its center-of-the-plate mainstays. The torchon of foie gras ($15) appetizer, for instance, is enhanced and elevated to a higher level by its yuzu marmalade and hibiscus plate mates.

Even humble, homey dishes like roast chicken ($24) and a hamburger ($18) receive the Ginor spin. The chicken comes with quinoa, Szechwan caramelized eggplant and Chinese long bean, and the Kobe burger sports caramelized onion confit, truffle cheese horseradish aioli and is accompanied by a generous bowl of crisp cubed Lola fries.

Other entrées of note were a rack of velvety venison ($33) atop a mélange of cruciferous veggies with raspberry pudding and smooth parsnip mousseline, and a column of thin-sliced rare strip steak ($35) in a red wine sauce with custard, sautéd greens and those Lola fries.

Among the small plates, or appetizers, we sampled a gossamer, delicate pumpkin bisque ($10) for the ages and a tasty, though slightly salty, plate of sweetbreads, ($17) encircled by foie gras.

Finish with a flourish by ordering the chocolate mousse tower ($9), actually a turret of alternating white and dark chocolate on a hard crust or better yet the hot fudge sundae ($9) of house made ice cream, robust hot fudge sauce and chocolate crumbles that give it textural contrast.