It’s hard to image a time when sketches were dismissed as exercises and softening realism with expressionism caused trouble. Yet, this was the experience of artist Milton Avery (1885-1965).
According to Karl E. Willers, Ph.D.—an Avery scholar and the new director of the Nassau County Museum of Art—Avery was avant-garde for his belief that the sketch was a “final, complete and a self-sufficient work of art.” Avery was also a radical for combining artistic styles that didn’t belong to the popular styles of his time (Social Realism and American Scene Painting and then Abstract Expressionism), said Willers. 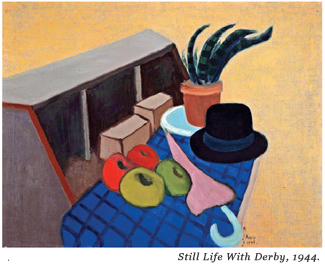 Viewers now have the chance to decide what they think for themselves through the solo exhibition, “Milton Avery & The End of Modernism” at the Nassau County Museum of Art. The exhibition is a rare one because of its breadth and quality of art that ranges from periods throughout Avery’s life, said Willers. It also draws attention to his reputation as a figurative painter.

“This is a very large show with very interesting Avery’s,” said Willers. “It’s an exciting project to get a collection of finished paintings and get to look at his sketches, some of which he made for the paintings. The sketches are free flowing and casual. They’re a very beautiful aspect of Avery’s work. He takes the speed and the casualness of his sketches and puts them into the process of painting. The way that he thought about the process was very Modern.” 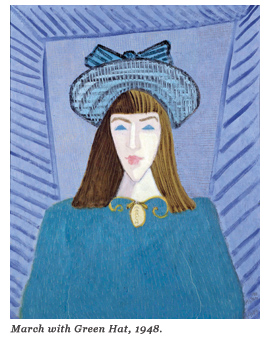 Avery kept true to his vision despite being misunderstood or dismissed by critics and contemporaries. In the end, his art stands apart for his “intense saturated color fields, the simplification of form and figures that emphasize the flatness of a canvas surface,” Willers said. Color Field painters including Mark Rothko (1903-1970), Adolph Gottlieb (1903-1974), Barnett Newman (1905-1970), Helen Frankenthaler and others were fans of Avery’s colorful compositions, according to the Nassau County Museum of Art.

Avery’s work is also marked by the idea that “less is more,” dynamic and spontaneous qualities he worked to infuse into his art and his sense of humor, according to Willers.
“He had a lot of humor, a quirky way of seeing life,” Willers said. “There’s an element of humor in his work that makes you smile or even laugh.”

“Avery is a master of the slight gesture,” Willers said. “It’s so charming, so innovative. He spent a tremendous amount of effort studying and thinking about the effects and what he wanted to do. I think it shows.”

Peering into Art by Milton Avery
By Pat Rogers

In addition to the exhibition on this historic artist there are opportunities to learn more about the artist who valued the sketch and made colorful “flat” paintings.

• A three-part lecture series continues on March 13 with “Avery Working” and concludes on April 17 with “The Late Years.” Lectures are led by Karl E. Willers, the museum director, exhibition organizer and Milton Avery expert.
• Pivate Tea & Exhibition Tour on March 2 and April 6. Features an introduction by Willers, a docent-led tour and concludes with tea, sandwiches and sweets.
• Illustrated Lecture on April 3 discussing “the color magic of Milton Avery and his direct influence upon Mark Rothko and Barnett Newman.” The talk is led by art historian Charles A. Riley II, Ph.D.
• Docent-led tours are held at 2pm from Tuesday through Sunday. No reservations are needed.
• A full catalogue accompanies the show. Writing is based on lectures given by Willers at the Samuel Dorsky Museum of Art at SUNY New Paltz.

Milton Avery & The End of Modernism is on view through May 8 at the Nassau County Museum of Art in Roslyn Harbor. To register, visit nassaumuseum.com or call 516-484-9338.