As anyone who watches “Reality TV” knows, wringing drama from bad behavior is fairly easy. Crafting gripping drama from good people trying to do the right thing, without becoming overly sentimental or sanctimonious, is much more difficult. Xavier Beauvois’ Of Gods and Men is one of the rare works that meets this challenge.

Inspired by real events, this unforgettable film tells the story of seven French monks living a life of quiet contemplation and manual labor in a remote monastery in North Africa. Although everyone in the nearby village is Muslim, the monks are an integral part of the local community. They sell their produce and honey at the local market, and run a clinic that provides the only medical services in the area. The monks’ peaceful and contemplative existence is threatened when Islamic militants slaughter a Serbian work crew, and order all foreigners to leave the country. The highly visible but defenseless monks are an obvious target. When the monks refuse to allow soldiers into the monastery to protect them, the government also demands that they leave. They find themselves faced with a difficult dilemma: Stay in the monastery or return to France. 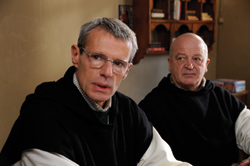 They are not fanatics and have no wish to die for their faith. However, they are proud men and deeply aware of their responsibility to the local villagers. Beauvois immerses us in the mesmerizing rhythms of the monks’ lives as they work, pray, sing and debate the potentially life or death choice that confronts them. A film that begins as a relaxed evocation of the monastic life develops into a work of searing tension.

Some of the most beautiful and moving sections of the film feature the monks’ singing of hymns and psalms. Beauvois insisted the actors do their own singing, which required months of training. The result is luminous sequences that capture the monks’ commitment to both their faith and to each other. 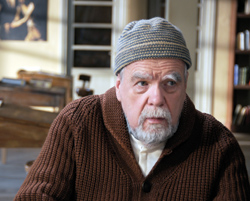 The film is highlighted by a brilliant cast of veteran French actors. Michael Lonsdale (The Last Mistress, Munich, Phantom of Liberty) gives a lovely performance that conveys the gentleness and sly wit of Brother Luc, the monk and trained doctor who runs the monastery’s clinic. With his aristocratic good looks and sharp wit, Lambert Wilson has often been cast as villains and scoundrels. American audiences may remember him as the evil Merovingian in the Matrix movies. In this film, Wilson wonderfully plays against type as Brother Christian, the thoughtful, erstwhile leader of the monastery.

There is an element of irony in the monks’ situation because they were scholars of Islam who never proselytized or attempted to convert anyone to Christianity. In a world where the tenets of every religion are routinely twisted to promote prejudice and hatred, Of Gods and Men is a refreshing portrait of an inspiring group of men who aspire to the highest ideals of their faith. Whatever your religious beliefs, or lack of, Of Gods and Men is simply one of the year’s most powerful dramas.