As the points piled up, the packed Farmingdale State College gymnasium crowd slowly lowered their jaws to the floor. In last year’s Suffolk County Class AA girls basketball final, North Babylon’s Bria Hartley knifed through the ordinarily stout Sachem East defense, shot over it time and again from every angle and distance. She finished with 51 points, a Long Island playoff record. The Lady Bulldogs lost, but that night, Hartley was simply on another level, in another world. The crowd had never seen anything like it and likely don’t expect to again for a good while, if ever.

She’s in a different world now, too. Hartley plays for arguably the most dominant program in college basketball history—the University of Connecticut women’s basketball team, winners of two straight national titles and at one point winners of 90 straight games. While some freshmen might buckle under the pressure she’s facing, Hartley’s embracing it—and thriving on it.
“It’s a dream come true,” Hartley said. “It’s everything I wanted when I was little. I’m glad I have the opportunity.”

She picked up a basketball in second grade and has barely put it down. In high school, alongside backcourt mate Eugenia McPherson, who’s now at St. John’s, Hartley led North Babylon to back-to-back Long Island championships in the 2007 and 2008 seasons. The next spring, her AAU team, Exodus, coached by Apache Paschall, participated in the Spartak Cup in Moscow, Russia. It’s around then she committed to UConn, turning down offers from places like Stanford, Duke and North Carolina. She considered playing hoops and lacrosse in Chapel Hill before choosing the nation’s No. 1.

After Hartley averaged 30 points per game as a senior in 2009-10, including the 51-point eruption, the accolades piled up—New York Miss Basketball, Gatorade New York Player of the Year for the second straight season, Parade Magazine All-America honors. She was also named to the prestigious McDonald’s All-America team, scoring 17 points for the East squad.

UConn head coach, Geno Auriemma, had himself a player every bit as good as she was competitive. Hartley could say the same thing about Auriemma, winner of seven national titles in Storrs. Last summer, Hartley was selected to play for the USA Basketball Under-18 National Basketball Team, helping the red, white and blue win gold at the FIBA Americas U-18 Championship for Women in Colorado Springs.

“It’s something you look forward to for so long,” Hartley said. “It was great to represent your country and to have U-S-A across your chest.”

Her coach was Jennifer Rizzotti, who knows a thing or two about pressure in Storrs; she played point guard at UConn from 1992-1996, leading the Lady Huskies to a perfect 35-0 record and a national championship in 1994-95.

“She knows what it’s like,” Hartley said. “She gave me some pointers. They ran stuff that is similar to what Coach Auriemma runs now. The experience also helped my game mature a lot and help me prepare for what I’m doing now.”

It didn’t take long for Hartley to “arrive” on the collegiate level. Facing second-ranked Baylor with the Lady Huskies’ then-80-game win streak on the line, Hartley scored eight straight points in a span of one minute and 47 seconds, turning a 58-55 deficit into a 63-60 lead. UConn prevailed 65-64. The Lady Huskies were the lead on ESPN’s SportsCenter and Hartley, a starry-eyed freshman, was the headliner. 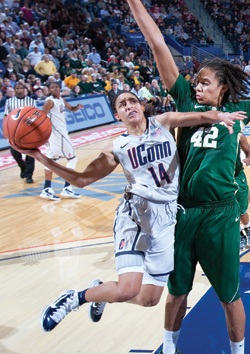 “[The Baylor game] is something that makes you grow up faster,” Hartley said. “A lot of the time you sit and watch, and I spent the whole game running around, not really that sure of what to do all the time. To go out there and have that type of success at the end, it was definitely a confidence builder.”

It was only the beginning for Hartley, who didn’t start in the team’s opener but came off the bench to score 18 points in her debut. Since the Baylor game, she’s been a fixture in the starting lineup. UConn continued its streak to 90 wins in a row, eclipsing the UCLA men’s team’s 88-game run.

“It was a good thing for women’s basketball and it was difficult to see the streak end, but life goes on,” Hartley said. “That wasn’t our goal for the season. Our goal’s to win a national championship.”

Through the middle of February, Hartley ranked third on the team in points, third in minutes as well as first in made three-pointers and three-point percentage. She had 21 points in the record-breaking 89th straight win against Florida State and tallied a career-best 24 to beat Louisville January 15. Statistically, it appears to have been an easy transition to the college game, but Hartley’s relied upon the upperclassmen, including National Player of the Year favorite Maya Moore, for advice. The classroom curriculum, the travel, the time management, even the baseline-to-baseline intensity of practice, it’s apt to wear on the newcomers.

“When you’re tired, you have to keep going,” Hartley said. “That’s the only way you’re going to get better at this level. You have to make a great pass and make a good decision whether you’re tired or not. Some times have been a little bit better than others, but it’s nice to be able to look up to the older girls to help you out and give you support. This is what you grew up to do, so you know what you’re getting yourself into.”

It’s only going to get tougher—the road to the Final Four always is. At UConn, the program only speaks in terms of national championships—wins, win streaks, personal awards, they’re all secondary to the end-of-season hardware. In Hartley, the Lady Huskies have someone who can help bring it back home.

“I’m looking forward to it,” Hartley said. “I’ve never been a part of one, but everyone talks about the excitement. I’m definitely going to enjoy it.”