It’s been quite a year for Rick Sowell. The Stony Brook University men’s lacrosse coach led the Seawolves to a breakthrough season that culminated with an NCAA quarterfinal appearance and near upset of No. 1 Virginia last spring. Sowell earned America East Coach of the Year honors, won gold as an assistant for Team USA at the World Lacrosse Championships in July and signed a contract extension to stay at Stony Brook through 2015. Sowell, a three-time All-Pro with the Baltimore Thunder of the Major Indoor Lacrosse League, enters his fifth season at Stony Brook with high expectations. The Seawolves are ranked fifth in the USILA Coaches Poll and have the program’s first Final Four berth in their sights. The coach took time out from a recent practice to talk about Seawolves lacrosse, the program’s Canadian pipeline and his status as a role model.

LIP: You pushed top-ranked Virginia to the limit in a 10-9 NCAA quarterfinal loss. Has a loss ever had a more positive impact on a program?
Sowell: Since that day back in May it’s been almost amazing what’s happened and how our program has been perceived. I don’t know that I’ve ever had a loss that’s had that kind of positive aftermath. I think people were impressed with how we fought. They appreciated it. If I heard it once I heard it 1,000 times—and I didn’t mind hearing it each time—people talked about how much fun our team was to watch.

LIP: How do you replace Steven Waldeck?
Sowell: We don’t. We told our guys we’re not looking for the next Steve Waldeck because there’s no one here. He was a very unique player. He had the ability to affect the game in so many ways: Ground balls, faceoffs, on the defensive end picking off passes. He’d been the heart and soul of our program the last three years. No one person can [replace Waldeck]. But we’re hoping we can make up for his production. He covered up for some of these guys the last couple of years. Now it’s their turn. We need them to break out and do a little bit more. 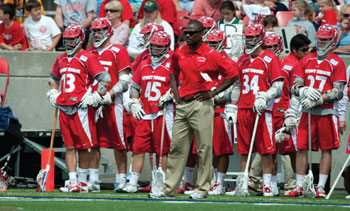 LIP: Who are a few newcomers you expect to contribute?
Sowell: Kyle Moeller transferred from Manhattan. He’s from Ward Melville. Boy, we like him an awful lot. He has the ability to take the ball in one-on-one situations. We have a freshman from England, Jak Wawrzyniak, who is a very good athlete. He played on the English national team at the World Games. As a 19-year-old he was probably the youngest person in the highest division. So he’s played at a high level.

LIP: Break down Kevin Crowley’s game and what makes him such a threat on the field.
Sowell: He’s good with the ball. He’s like a running back in that he runs downhill and puts pressure on you defensively. Before you know it he’s 7 yards from the goal. He dodges with the stick up so he’s ready to shoot it or feed. He always dodges with his head up. A lot of times he’s looking for his good buddy Jordan McBride, who is one of the best finishers I’ve ever been around.

LIP: What’s the Canadian connection? You have six Canadians on the roster.
Sowell: It all started with a little luck. People ask, ‘Where’d you get Jordan McBride?’ The fact of the matter was I saw Jordan at the 205 Camp in 2006 when I was at St. John’s. He was a little heavier then, but you could see he had great hands. For whatever reason he didn’t make an impression with 99.9 percent of the other coaches. No one recruited him except me. I left St. John’s for Stony Brook that summer. And when I came to Stony Brook he was the first person I called. Now he’s excited about Stony Brook. He tells me, ‘Coach, I’ve got a good buddy of mine who wants to come to the United States and play lacrosse as well. His name is Kevin Crowley and you’ve got to see this kid play.’ That started it.

LIP: Do you feel any responsibility toward being the only black head coach in Division I lacrosse?
Sowell: I’m very proud to be an African American and I certainly hope I can have an impact. Maybe a young man can look up and see that not only can he play the game but maybe someday coach the game too. But I don’t know if I look at it as a responsibility. I’m really too focused on my team and trying to be successful. I am involved in helping increase minority participation in our sport and anything I can do along those lines. I’m pretty sure I’m the first African American Division I coach. I just don’t want to be the first one fired. First one hired is one thing. First one fired – I’m trying to avoid that. [laughs]

LIP: I don’t think you are in any danger right now.
Sowell: Knock on wood. You are only as good as that last game. Things are certainly going well. The challenge is to try to be consistent.

LIP: What is your favorite moment as a Seawolf?
Sowell: It was the morning of our quarterfinal game. We had our pregame meal at the Wind Watch in Hauppauge. It was the NCAA headquarters. Then we drove back to campus. Coming up Nichols Road with a police escort into our parking lot and all our fans were tailgating and wishing us good luck—that was really a special moment. It was unbelievable how far we’d come in four years.