Not since the original British Invasion of the 60s and the punk/new wave scene of the late 70s and early 80s has music from the UK had so much success crossing over to the United States. While bands like Oasis and Radiohead made inroads since their respective inceptions, in the past ten years, bands and artists such as Corinne Bailey Rae, Amy Winehouse, Coldplay, Snow Patrol, Adele, Duffy, Mumford & Sons and countless others have not only scored big hits in the UK, in the states and elsewhere, but the quality of their music suggests a bright future for all.

Another artist who has been at the center of this new UK invasion has been James Blunt. His 2005 debut album Back to Bedlam, nominated for five Grammy awards, spawned the massive international hit “You’re Beautiful” and won many awards. Back to Bedlam has the distinction of being the fastest-selling album in one year, in the history of recorded music. The album was the biggest-selling album in the first decade of the 21st century, selling 3 million copies in the UK and 11 million worldwide. Blunt’s plaintive pop, which features his sweetly gruff vocal style, has an unmistakable sound. Blunt followed up Back to Bedlam with All The Lost Souls in 2007, which was an even more ambitious and introspective work, and he is now back with his third album, Some Kind of Trouble. All of his albums have been issued in America on Atlantic.

The day after Blunt launched his current thirteen-month world tour in Edinburgh, Scotland, he took time out for a rare interview. A superstar in England who makes his home in Ibiza, Spain, to avoid the crush of celebrity, Blunt in person is nothing like the pop stars who come and go in England’s fickle pop charts. Easygoing, polite, friendly and seemingly unaffected by his massive fame, Blunt is content talking about writing, recording and music in general.

Blunt began by going through the musical changes that evolved over his first two albums. “My first album was such an innocent album,” he stated. “It was just me writing songs about life as it came and it was very naive, and I loved it for that and that was its charm.” It took Blunt more time to formulate his feelings about his second album. “All The Lost Souls was for me such a necessary album of a world with all the essence stripped away from it,” he began. 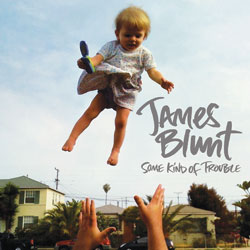 “With all the cynicism of the modern world—which we are laced with in the UK when everything is reported to us with the notion of envy and aggression and looking for the negative rather than looking for positive—I was looking in toward myself. But as a songwriter, that’s what you have to do if you write about the things that make you feel strongly. I wrote a dark album and you can tell by the title that something is going on.”

As for his new album, Blunt said, “It took me a long time to work out where the music was going. I knew I had that sense of optimism, but I didn’t know how that was going to be captured in music.” Blunt was able to translate his feelings of optimism into music after meeting the songwriter and producer Steve Robson, who produced the album and co-wrote most of the songs with Blunt, and has worked with American country acts such as Rascal Flatts, Carrie Underwood, and LeAnn Rimes and UK pop artists such as Lily Allen and James Morrison. Blunt talked about the co-writing process. “If you’re on your own,” he said, “you settle early. If you’re with a songwriter you respect, you’re going to push each other.”

Going back to All The Lost Souls, I brought up how “One Of The Brightest Stars” seemed like an homage to the Bee Gees’ early 70’s classic “Run To Me.” Although he did not know the specific song, he said, “I love the old Bee Gees’ stuff.” He then paused, laughed and said, “I have a dream where I think I’m the lost Bee Gee.”

For someone who is such a distinctive vocalist, Blunt said that on his first two albums he was most influenced by the songwriting of such 70’s artists as Lou Reed, Leonard Cohen, Cat Stevens, Paul Simon and Elton John. He feels his newest album is more influenced by American guitar bands of the late 70s, reflective of the “teenage excitement and optimism” of that music.

James Blunt will perform at the Beacon Theatre on April 21st at 8pm. jamesblunt.com.

Buy James Blunt’s Some Kind of Trouble from iTunes