Randall Rosenthal’s artwork can fool you. From a distance, his carved wooden sculpture looks like a stack of newspapers, the notebook you’ve been looking for, a treasure trove of baseball cards bundled with rubber bands or a box of money. A closer examination may still leave viewers pondering: Is it real or is it art?

The question may persist even if Rosenthal’s work is installed at a museum, an art gallery or at a SOFA show (The International Expositions of Sculpture Objects & Functional Art). That’s okay—the East Hampton artist is used to quizzical first reactions to his wooden works and welcomes them.

“I’m making an intense visual object,” he said. “The goal is that you can’t not look at it.” 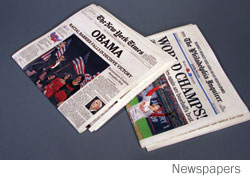 Rosenthal is also used to some people “not getting” his work. The wooden sculptures appear as if they are the actual objects they depict. The resistance to believe the artwork is the object it depicts is so persistent for some that Rosenthal posted process pictures on his website to dissuade doubting Thomases.

Rosenthal’s sculptures are hand carved from a single piece of wood and painted with both acrylic and ink. The works approach realism but remain expressionist because they don’t render accurate true-to-life dimensions, he said. That’s not the point of his art. His objects are an invitation for viewers to examine the pieces and become engaged with them. 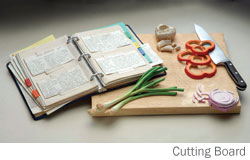 “They look real from a distance but they’re not supposed to be realism,” Rosenthal said. “When you get close, you can see the corners may be cheated—meaning they’re not perfectly square…I always leave the wood grain visible so people can see it’s wood. I’m not trying to hide it—the fact that it’s made from wood is an important part of the piece.”

Sculptures depict objects made from paper since paper comes from wood, he said. His sculpture depicts stacks of newspapers, magazines, legal pads, address books and money piled in boxes or spilling from an envelope. Baseball cards, comic books, carving boards and map pages are also subjects. 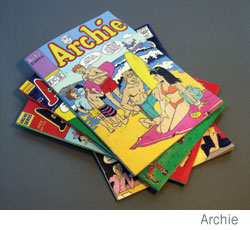 Some of his sculptures have made their way to high places. A sculpture of New York Times newspapers announcing President Barack Obama’s win to the presidency is now owned by Obama. The piece was gifted by artist Eric Fischl, who previously owned the work.

“I’ve never met Obama,” Rosenthal said. “It’s pretty cool knowing my work is in the White House as part of his collection.”

Sculptures of books may depict an open book with pages or a closed one with the cover alone. Closed books may have recipe card, post-it notes or papers protruding from the book’s side as they mark pages inside the book. A flower, leaves or a fishing lure on a line may curl upon open pages. Photo albums may reveal taped “photographs” framed with white edges as if printed in earlier eras. 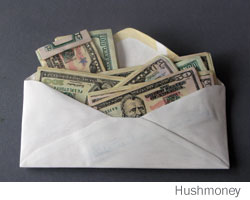 Rosenthal works can sometimes stretch a decade long, he said. Unlike commercial woodworkers, Rosenthal doesn’t use shop drawings or pre-calculated plans when carving his sculptures. His process is reductionary. The block of wood guides the process and serves as muse as Rosenthal carves wood to create the figure inside.

Rosenthal is exhibiting several pieces at SOFA New York April 14-17. His work is being shown by Jane Sauer Gallery of Santa Fe, New Mexico, who represents his art. His art is also represented by Pamela Williams Gallery in Amagansett. 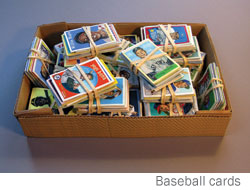 Rosenthal’s work has been drawing attention and fans at online sites like StumbleUpon.com, he said. His art has been shown at the Parrish Art Museum, Guild Hall, galleries in Germany and other places. Rosenthal’s art and process can be viewed online at randallrosenthal.com.