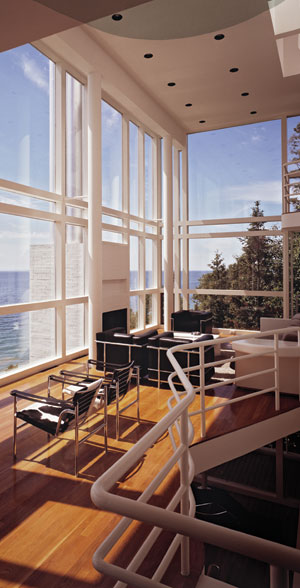 In a chapter-long meditation on the color white, Herman Melville’s enigmatic transcendentalist narrator Ishmael remarks that “in essence whiteness is not so much a color as the visible absence of color, and at the same time the concrete of all colors.” This is why there is a “blankness, full of meaning, in a wide landscape of snows” and a symbolic resonance to the white whale that drives the hirsute artist-as-impassioned-sailor Ahab mad in Moby Dick.

“Oh, yes, it’s definitely one of my favorites,” he confesses when I ask him about the book during a recent phone interview. Like a significantly more refined Captain Ahab, Richard Meier is enamored with the color white. His fascination has taken him around the world, earned him countless awards and honors, and emblazoned him in the ethos of conversation around contemporary architecture. In his acceptance speech for the venerable Pritzker Architecture Prize in 1984, Meier stated, “White is the most wonderful color because within it you can see all the colors of the rainbow. The whiteness of white is never just white; it is almost always transformed by light and that which is changing: the sky, the clouds, the sun and the moon.” And in an excerpt from Richard Meier Thirty Colors (V + K Publishing, 2003), one in which the artist himself references Melville’s classic modernist (for the time) whale tale, he describes how white is “an expanding color and not a limiting one.”

It is this sense of expansiveness that defines Meier’s architecture. His work is immaculately clean, remarkably unobtrusive and surprisingly soulful. Meier structures nestled in natural settings seem to highlight the lush greens and dark brown hues of surrounding forests. Similarly, a Meier building amidst the concrete flora of an urban setting complements the existing symmetry of the vertical and horizontal spaces. The crispness of the structure presents the inherent color of a city around it the way a cornea presents the iris and, indeed, the same way the eye presents the soul of a person. It is a discipline in subtraction, this love affair with white. “The less I reveal, the more you will see,” the blankness seems to say. But that, of course, is mostly in regard to color, for in virtually every other aspect of design, a Richard Meier building gives and gives and gives. 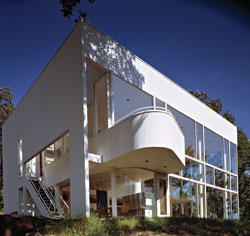 “Openness and clarity are characteristics that represent American architecture,” wrote Meier in the foreword to The Atlas of American Architecture (Rizzoli 2009), and I can’t help thinking about what that statement means in the context of culture. Perhaps Meier’s designs are partially American because of their ability to let in their surroundings, to coalesce and to blend in (as counterintuitive and paradoxical as it may seem) with the natural light and landscape around them. These behemoths of manmade materials create a hub for the confluence of image and space—not an abstract notion of space but rather one filled with boxes and angles and arcs. A cubist space. Think Braque or a colorless Juan Gris—both European, yes, but operating in a paradigm that is, in this writer’s opinion, markedly American. Cubism is less a jumble of random cubes than a concert of many perspectives coming together to form a more complete picture. Sounds like a melting pot to me. And in Richard Meier’s modernist kitchen, his brilliant and rich melting pot is painted stark white. 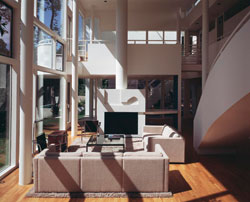 Having said this, however, it’s important to note that all of Meier’s works are quintessentially singular, vast, and unapologetically bold by design—also very American. This tendency to be open and seduce natural light suggests an exhibitionist nature beneath the bravado. One can’t help but stare. In his speech for the 2001 Americans for the Arts Lifetime Achievement Award, Meier cited architecture as “the most public of all the arts,” and to stand in front of one of Meier’s buildings is to experience this firsthand. The earth is the museum for a work of architecture, and the pedestal on which the art is exhibited is the street where we stand when looking at it. Why not make it big and beautiful? Why not dream for the stars?

So therein lies another paradox. A work may be grand but sublimely intimate. It may be boastful but supremely hushed like a minimalist sky. It may be two things at once. And it may mean two separate things for two separate people at once. 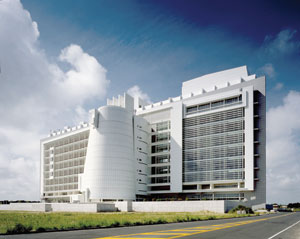 The idea of architecture itself—the idea of urban planning—begs the question: How can the designer/artist satisfy both the client’s desires as well as his own artistic needs in a given project? And this gets complicated when the client is many clients or a constituency. What about a city or country? Agendas can spiral into each other like an Escher staircase out of control. Balance comes to mind as something that would seem necessary—balance combined with a relentless and profound vision to chase down that which stirs the soul, be it whale, light or stone. But still, how does one strike that balance? This question is especially poignant if we consider, as Meier says in our interview, how “the site, context, and budget…all of these factors come into play.” And, evidenced by dozens of private and commercial residences, museums, churches, universities and a myriad of federal buildings, how does one do it so often and with so much success? 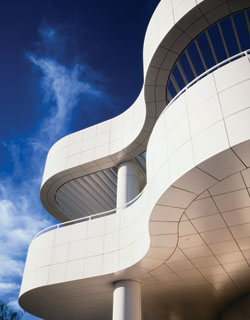 The answer to these questions is probably why many consider Richard Meier to be a 21st century visionary. When I ask him about this reconciliation directly, Meier responds, “They may know what they want, but it’s the architect’s job to interpret what they want into a spatial organization.” He’s written about how architecture “connects the present to the past and the tangible to the intangible,” but I think his body of work might also be a conduit to a few tangible truths about what humans need in an increasingly dismal future filled with conflicts over economic and ideological differences. Working during a period of time in human history where no need is more urgent than the need to balance our desires and values with the desires and values of others, Meier has figured out a way to satisfy his client’s utilitarian and aesthetic needs with his own artistic needs of expression. In this way, the American Embassy in London is a kind of dance between two cultures as is the Jesolo Lido Village in Italy. In this way, the Gagosian Gallery Expansion in Beverly Hills is a fusion of purposes and tastes and, to a certain extent, trust between an art collector and an artist. And when Richard Meier was selected to design the largest arts commission of the 20th century in 1984, the 1.3 billion dollar Getty Center in Los Angeles, he took on a thirteen-year lesson in reconciliation. 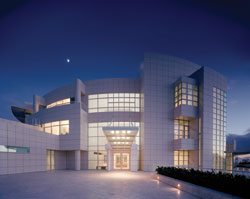 When I think about this kind of reconciliation, I imagine a young Richard Meier “reading Frank Lloyd Wright’s biography and books by Le Corbusier,” as he mentioned in a recent National Public Radio news story, in his family’s very “typical, pseudo-colonial…fairly conventional house.” (I also like to think that a copy of Moby Dick that fell off a bookshelf is leaning curiously against a wall.) And then I like to imagine an even younger Richard surrounded by angles, blocks of them, hundreds or thousands of rectangular and cylindrical toys, all different shapes and sizes, all little construction sites for the mind, all in a sunlit room in a quiet corner of this house in Newark, New Jersey. America. Richard Meier, the modernist architect, keeping himself busy for the moment, another kind of edificial understanding. For the little architect in all of us, it’s how things come together that’s interesting.