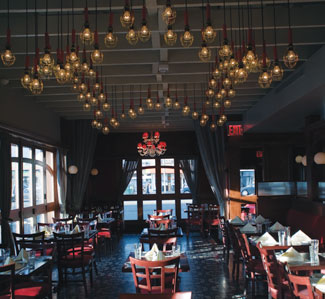 Although many Island restaurants are struggling to stay alive in these tough times, the nine-month-old Aperitif Bistro in Rockville Centre seems to be on a roll. Call for a Saturday night reservation for 7 or 8pm and you might be told as I was, “6 or 8:30pm.” Friday nights are more of the same at this cheery, noisy, bustling bistro with its tiled floor, wine racks and photos of French landmarks. We managed a 7pm reservation, but every seat at Aperitif was filled and as soon as a table emptied, it was refilled by some of the many people waiting at the bar. Even ordinarily slow weekdays are well above the level of business being experienced elsewhere.

The reasons for this popularity are no mystery. Co-owners Peter Oktas and supervising Chef Julio Velasquez are doing what, at this point, comes naturally to them. They are replicating their French-style bistro successes at Sage Bistro in Bellmore, Brasserie Persil in Oceanside and Sage Bistro Moderne in Woodbury. Although their first venture, Sage Bistro, was an almost mirror image of Bistro Cassis in Huntington where Messrs. Oktas and Velasquez worked and met, each new restaurant of theirs offers a more expansive concept and extensive menu. 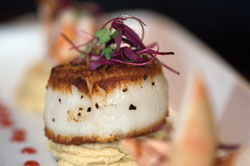 Among twelve small bargain-priced plates at $5 each is savory, gutsy lamb sausage in puff pastry perched on a swirl of Dijon Mustard sauce. Other sampled starters were a rich foie gras terrine ($12) atop slices of crisp toast; a super fresh trio of salmon, tuna and fluke tartare ($12); and an Heirloom beet and goat cheese salad ($10) harboring micro greens, walnuts and fresh basil in an aged Balsamic vinegar olive oil dressing.

Those three filet mignon sliders ($16) with sautéed mushrooms and Gruyére cheese were buttery, king-sized beauties. A Bronzini stew ($24) yielded a whole, delicate fish crowning a lively mélange of bell peppers, olives, capers and scallions. A seared duck breast was also propelled by its semi-sweet underpinning of sweet potato purée, fruit chutney, sautéed spinach and pomegranate reduction. A rack of lamb special ($26) didn’t have much of its promised pistachio crust but its mint pesto, potato cakes and tenderness earned high marks. 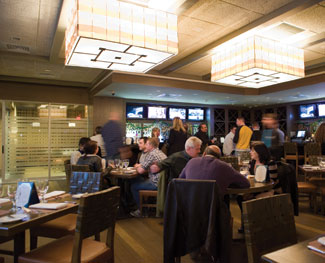 Although I caught Bistro 72 on a wintry, cold, off night, some good signs were nevertheless apparent. It would not be surprising, when it operates on all its mid-summer cylinders, that Bistro 72 in Riverhead’s Indigo Hotel becomes a formidable restaurant. It does seem to solve the hotel-restaurant dilemma of being either too adventurous for hotel guests or too predictable to draw outside diners.

Its two dining rooms of wood, chrome and stone open to two warm-weather, open-air dining areas. The room has the feel of a hotel lounge more than a restaurant dining room. The larger, more traditional dining room wasn’t being used during the slow season. When making our Saturday night reservation, I wanted to be sure Lia Fallon would be in the kitchen. I received a positive reply. Unfortunately, she wasn’t. Rather, this talented chef was probably at her Wading River Restaurant.

That brings us to the earnest, well-intentioned, though unpolished, very rough-at-the-edges B-team service. Our solicitous waiter didn’t offer to take our coats, didn’t check to see if we had a reservation, showed our wine and gave a first taste to a diner who didn’t order it and came to the table every ten minutes, often interrupting conversation, to ask if everything was all right. 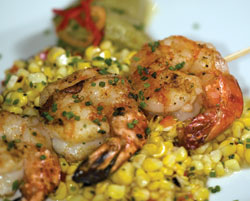 Yet the food at Bistro 72 offers more delights than disappointments. Diners can choose a small or large portion of almost every dish. We opted for the jumbo size and were rewarded with a bowl of cream of potato soup ($9) sprinkled with chives and given a mild, smoky flavor from its bacon and smoothness from a dash of sour cream. Three sizable grilled shrimp ($14 small portion) perched atop corn salsa with a squiggle of avocado mousse also drew deserved plaudits. Two big, plump, lightly-fried risotto balls ($20 large portion) were infused with mushrooms, ricotta cheese and shaved Parmigiano Reggiano on a bed of oven-dried tomato purée and truffle oil, yielded slightly less taste than the ingredients promised. A pricy mini-lobster roll ($18 small portion) on a grilled potato bun contained little of its listed citrus, tarragon cream and scant flavor.

Entrées were four for four. Even a big hunk of humble pork shank ($27 large portion) prospered from the kitchen’s spins and plate mates like its rarely-encountered guava chipotle barbecue sauce and creative scallion cornmeal hush puppy accompaniment. Likewise four towering, homey pulled pork sliders ($25 large portion) sported a noteworthy house made barbecue sauce, but got no boost from its dry, tasteless celery root slaw. Diners who enjoy some snap in their dishes should target the four substantial short rib quesadillas ($22 large portion) swirled with Jalapeno cream. The sliced, medium rare Crescent Farm duck breast ($28) was an all around success. Its crisp, country bread crostini and imaginative sweet potato brûlée made it even better.

Desserts ($9) batted .500. A small, drab square of banana bread pudding was flavorless without a hint of banana and a warm, underwhelming chocolate cake generated the faintest of chocolate taste. On the plus side, a warm apple crust topped with a generous scoop of gelato was a sweet success and a crème brûlée displayed a crackly surface and velvety texture within.