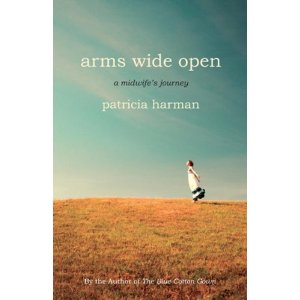 You and your generation would set the world on fire. You were going to fix what your parents had broken: you’d stop the war, gain equality, save the planet, end poverty, live gently. You were aflame with the passion that comes with a youthful innocence you wish you still had.

Now, you don’t have that kind of energy.

But somewhere beneath your surface, that passion still simmers. It never left you, and what you do with it – as you’ll see in the new memoir “Arms Wide Open” by Patricia Harman – may look comfortingly familiar.

No electricity, no central heat, and miles from town with no vehicle. It sounds like a reality show plot, but that’s the way Patricia Harman lived forty years ago. Harman and her then-partner Stacy had purchased eight acres in northern Minnesota and repurposed a crumbling cabin, hoping friends and former commune members might join them and their baby son in living off the land.

For Stacy, sustainable farming was a dream, but Harman was restless. She’d tried several times to set up birthing classes for other “hippie chicks”, but when winter set in, travel was almost impossible and it was difficult, at best, to reach the main commune house. Isolated and unhappy, Harman packed a few meager possessions and said goodbye to the man she loved and their child. She left under power of thumb.

Six years later, after having traveled through several states, Harman settled down on a communal farm in Ohio. She met her husband, Tom, at that commune and when they moved to a small farm in West Virginia, Harman started teaching childbirth classes almost immediately. A mother again, she quickly became known as a good midwife but times, they were a-changing.

The Harmans both went back to college: he, for an MD and she, for an RN. The parents of three grown sons, they had opened a clinic for women in the northern Appalachians, specializing in maternity and pelvic pain. The days of commune living over, the Harmans had two homes, both with modern conveniences.

But with modern times come modern problems, both professional and personal. Was it possible to reach back to the past to heal the future?

Did you ever read a book that lulled you into such a wonderful state of mind that you were almost heartbroken when it ended? Yep, that’s exactly what it’s like to read “Arms Wide Open”.

Through decades-old personal journals, author Patricia Harman gives readers an inside peek at hippie culture and The Seventies through the eyes of a fresh and idealistic young woman who wanted to change the world, and the woman she became. I loved this wistful, wonderful story of the birth of a birth-helper, and I think you will, too.

If you’re looking for a gracious, grateful memoir or if you get nostalgic over the not-so-distant past, read this book. “Arms Wide Open” will surely warm your heart.