I have an odd relationship with folk music. When I was 15 or 16, it was, like Visa, everywhere I wanted to be. I stole/borrowed a bunch of vinyl records and a record player from my parents’ attic and spent a lot of my formative years listening to Joni Mitchell, Joan Baez, and Jackson Browne, as well as newer folk artists like Shawn Colvin and Dar Williams. (By the way, you should know that every single one of those artists is still putting out albums and touring. That’s one of the awesome things about the folk scene.)

When I started playing some different kinds of music, and listening to artists like Dashboard Confessional and Bandits of the Acoustic Revolution—these are acoustic artists but definitely not folk artists—I started to get a little disgruntled with stereotyping. I learned that if you’re a female musician, 95% of people are going to assume that you’re either a chick singer in a band, or a folk singer. (Clearly these people have never seen Bonnie Raitt rock a slide solo on a Strat.) I also learned that all the vastly different voices I was hearing in my local singer/songwriter scene were being labeled as big folky folksters simply because they weilded acoustic guitars. I’m talking about artists like Maryann Leone, who is as comfortable covering Ozzy as she is covering Ani, and John-flor Sisante, who writes adorably infectious indiepop as well as dark piano ballads named things like “Dirty Violin”. In short, I’m not down with labelling any female with a guitar, and any person with an acoustic guitar, as a “folk artist”–not because I have an issue with folk music, but because it simply isn’t accurate.

I got slightly political about this and I think some people are afraid to say the word “folk” to me now. But, lest anyone has misunderstood, I will clear the air now: I pretty much think folk music is da bomb! I love the activist roots that it is so closely linked to. I love that in the folk circuit people are truly judged on their music and not on their age—or their looks, or their race, or who they like to sleep with. I love the honesty that is present in folk music.

So don’t think I’m not all about Patchogue’s folk festival this Saturday. I am. Here’s the story on that, guys.

You don’t get too much “big-timing” in the folk circle, which results in some amazing diverse line-ups of established artists with locals and newcomers. The Patchogue Folk Festival is no exception. The headliners are Peter Yarrow of Peter Paul and Mary, Susan Werner and Vance Gilbert. Earlier in the day (2 -5), many of my personal favorite local songwriters will be performing in a big free Live in the Lobby folk bash. To name names, you will hear Mike Bonti, Chris P. Cauley, Suzanne Ernst, Alan Semerdjian, Larrin Gerard, Butcher’s Blind, Jay Scott, Dave March (of Miles to Dayton) and Gathering Time.

Pretty much, it’s an amazing free show before the amazing big show. Make a day of it. You won’t regret it. 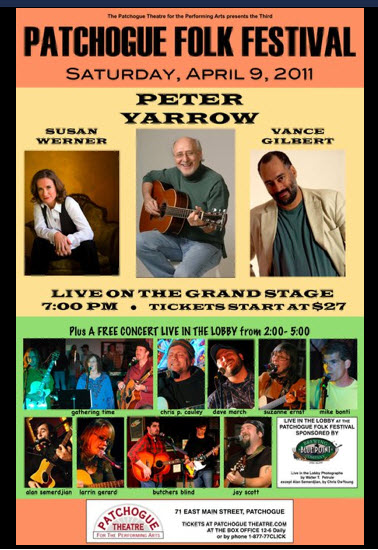