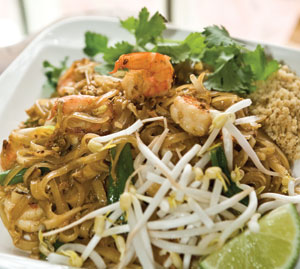 Bangkok Station of Great Neck is the latest venture of a sprawling, hard working Asian family whose members own Thai Station in Merrick, Onsen Japanese restaurant in Oakdale and the Lemon Leaf Thai Restaurants in Mineola and Carle Place.

Bangkok Station, owned by two brothers, Tony and Kenny Chen, (Kenny also owns Thai Station in Merrick) will appeal to conservative diners who are adverse to spicy food and disappoint those seeking authenticity and sizzling hot dishes. The little red peppers on the menu indicating “hot and spicy” can largely be disregarded at Bangkok Station where 14 or 15 of the 16 dishes I sampled packed no punch. The preparations here, some of which are quite commendable, tilt toward the soothing familiar fare of China rather than the assertive Indian influences that also impact Thai cuisine. Although some traditional Thai spices like tamarind, chili paste, fish sauce, garlic, lemongrass, pepper and basil dot the menu, their impacts on the various dishes is muted.

The first dish we received quickly revealed the trend. The papaya salad ($7.95) marked “hot and spicy” is often so scorching that it brings tears to diners’ eyes. Bangkok Station serves a good, refreshing version that’s sweet rather than spicy. 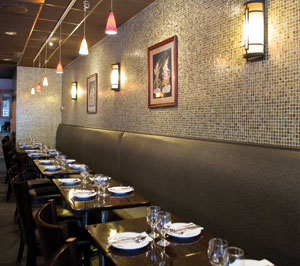 After that, if diners closed their eyes and were asked to guess the type of food they were eating, many might well respond, “Chinese.” Most of it is very worthwhile at this Chinese-owned restaurant where the language of the kitchen is Mandarin not Thai. Be sure to try the Pak Ki Mao ($9.95) or drunken noodles. This stir fry, with its broad rice noodles alive with basil, onions and bell peppers, should be ordered with the tender, tasty beef option (chicken and tofu are also available).

Other winners: The so-called spicy shrimp and string beans ($13.95) that offer textural contrast as well as an interesting flavor; the spicy chicken fried rice with basil ($9.50) that harbors a generous helping of moist meat; the thin, marinated lemongrass pork chops ($12.95) enhanced by their garlic, lemon juice and galangal (a ginger like root). Fish lovers will be delighted with the look and taste of a whole fried red snapper ($21.95) sporting a crisp, crunchy surface that’s enlivened by its garlic, chili and tamarind.

The most exuberant dish that yields real snap and zing is the Thai pepper steak ($12.95) or sliced beef powered by its chili pepper and bell pepper. Less impressive were Rama chicken ($12.95) on a bed of watery spinach and dry, overcooked Thai sesame chicken ($11.95).

Other virtues here are the variety of rice accompaniments (white, brown, sticky, coconut, jasmine, etc.) and the sweet, caring service of the waitstaff of young Asian women. 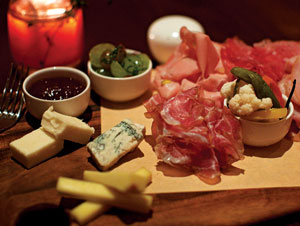 It all started with a pizza shop. Doesn’t it always with Italian family ventures? Mike’s Pizza in Amityville was where Michael Esposito, starting at age ten, learned the restaurant business from his father. He’s come a long way since. Nine years ago, before he was thirty years old, he opened Vittorio’s, a good, if conventional, Italian restaurant. Then last November, with the help of Massimo Fedozzi, a master chef from Genoa, Italy, who worked in London, Monte Carlo, Switzerland and throughout the United States, he graduated to Vero (“true” in Italian). It’s just a half block away from Vittorio’s but a world away in concept, style and content. For Vero is no Italian-American red sauce and pizza joint. The menu does not stick to the predictable antipasti, calamari, baked clams and mozzarella sticks routine. Rather it is an unpretentious, moderately-priced, small-plate restaurant featuring first-rate, authentic ingredients.

It’s a well put together place featuring a front bar and dining room with cream-colored leather booths, iron chandeliers, a long marble-topped bar and antique mirrors. The rear, larger dining room, with its vaulted ceiling, exposed wood beams and Murano glass sconces, along with one plush seat at each table, make it a pleasant but unpretentious destination.

Diners, who enjoy eating at Chinese restaurants because they can sample many different family-style dishes, will especially like Vero, for in some ways it is an Italian version that incorporates the sharing ethic.

Vero is more than a Madison Avenue name idea for an Italian restaurant. This place lives and breathes true Italian food. Its $7 salumi choices, $8 bruschetta, $4 olives and $7 formaggi or cheese choices all feature first-class Italian ingredients like the heart of prosciutto (7), spicy Calabrian salami ($7), Sicilian eggplant relish ($7), and its piattinis or small plates feature the likes of cold Arborio rice salad ($8) and polenta fries ($8). 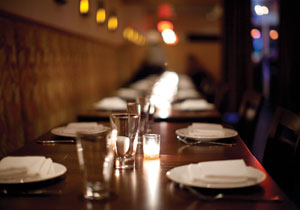 Pastas priced at $11 and specialties of the house at $17 are also bargains. The tall king-sized meatball sliders might not be recognizable in any of the regions of Italy featured on this menu, but they are mighty good.

One caveat, when crowded, as is understandably frequent, this boisterous, informal, upbeat spot is ear-splittingly noisy. Civilized conversation is difficult to come by. But homemade comforting Italian food isn’t.

Try the warm pumate or tomato confit bruschetta ($8) capped with a touch of basil, the thin sliced coppa ($7) or shaved Berkshire pork shoulder. Another new addition to the menu, slabs of sausage on warm, mellow Tuscan beans, is more than worth a tumble. Among the specialties, the cioppino or seafood medley, much like the French bouillabaisse, is a lively shellfish mix bursting with flavor. Other specialties that score are the grilled veal lollipops touched with a red wine essence and the grilled lamb chops in a lemon-butter sauce with sautéed escarole.

The fruit-centered desserts, with their rich melds of ingredients, are all warm and comforting. None more so than the bread pudding infused with roasted apples and black currant topped with blueberries and frangelico anglaise. Running a close second was an intense, sinful chocolate torte with an Oreo crust on a pool of raspberry coulis. The strudel here with pears, raisins, walnuts and pine nuts baked in a puffed pastry shell and topped with clotted cream is better than that served at most German restaurants. Nor is there anything wrong with the panino di Nutella or chocolate hazelnut and banana sandwiches.