As Long Islanders, we are surrounded by the beauty of our shores, parks and beaches, and also by our rich history. May is Long Island History Month providing the perfect time to explore the wonderful relics of yesteryear.

Some of Long Island’s most magnificent sights are the mansions that dot the Gold Coast on the famed North Shore. The Gold Coast came to be between the turn of the century and the Roaring 20s. It was a time of opulence for those referred to as industrialists, who made great fortunes and came to the shores of Long Island to build their grand estates. Filled with art and constructed with materials only found elsewhere in the world, these homes became some of the richest palaces on the east coast. 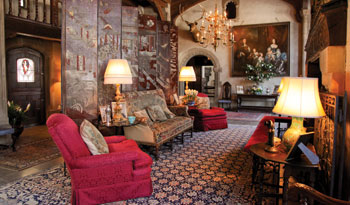 While many of us visited these famed mansions on childhood field trips, when was the last time you went as an adult? Enter Gold Coast Mansions Tours. Founded in 2009 by Nancy Melius-Murton, Marketing & Design Director for Oheka Castle, the tours and companion online resource are designed to encourage Long Islanders to once again visit the historic homes of some of the wealthiest and, in some cases, most colorful characters.

“We started the tour program because I truly believe that the Gold Coast mansions are such an asset and source of pride for Long Islanders,” says Melius-Murton. “I think it is important to raise awareness of their presence and the need to support them so that they are preserved for future generations to enjoy.”

It’s not often that we Long Islanders can visit a castle. And Oheka Castle is a sight to be seen. The massive mansion embodies the beauty and intricacy of French architecture and design. In 1914, when Otto Hermann Kahn, a well-known financier and philanthropist, purchased the 443 acres (23 acres currently remain) of land, his inspiration was the Fountainebleu Château in France. Kahn sought to build atop the highest point on Long Island, Jayne’s Hill (located just north of Melville), however, he was denied. Not to be discouraged, Kahn built his own hill in the Cold Spring Harbor area, and then began construction in 1917 (completed in 1919) of what is still known as the second-largest private residence ever built in America. The cost? Approximately $11 million. The result? An opulent French-style château that was the scene for the many lavish parties Kahn was known for. Today, it is immaculately preserved by the Melius family, who restored the home in the 1980s and run Oheka Castle, hosting modern day, high-profile events.

Oyster Bay’s Planting Fields Arboretum State Historic Park is home to Coe Hall, a 65-room Tudor Revival-style home that has been restored as a museum. The former Gold Coast estate, which consists of more than 400 acres, is rich with history and a perfect destination for horticulturists, history and design enthusiasts, and visitors looking for state-of-the-art gardening solutions. The home was built between 1918 and 1921 for and by William Robertson Coe and his family. Coe was an avid outdoorsman and lover of the great wide west. He was the owner of the Wyoming-based “Buffalo Bill” ranch and today many of these artifacts are housed at his beautiful eponymous estate.

Speaking of beauty, the blooms at Old Westbury Gardens are just gorgeous. The Westbury Mansion, owned by the Phipps Family, is a 44-room, Charles II-style mansion filled with priceless antiques and art. However, it’s known primarily for its grounds, which include some of the most beautiful gardens in the world. The fragrance alone will instantly put you at ease as you gaze at all of the colorful springtime blossoms. Old Westbury Gardens also provides visitors with 200 bucolic acres of open space, which feature an eclectic selection of events, including Midsummer Night, antique auto shows, concerts, kids’ days, Scottish Games and dozens of other programs. The combination of those three elements—the house, the grounds and the events—all being available at a single venue, is what makes Old Westbury Gardens unique. 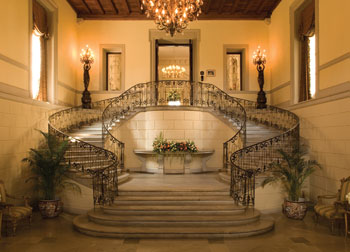 Ranked among the nation’s most important suburban art museums, Nassau County Museum of Art is located on the former Frick Estate—a spectacular 145-acre property in Roslyn Harbor. In 1919, Henry Clay Frick, the co-founder of US Steel, purchased the property and commissioned architect Sir Charles Carrick Allom to redesign the facade and much of the interior of the home, which the Fricks named Clayton. In 1969, the estate was purchased by Nassau County and converted into the Nassau County Museum of Art. The main museum building is a three-story Georgian mansion, which is an accurate example of the architecture used along the Gold Coast in the late 19th century. In addition to the mansion, the museum includes the Art Space for Children, which is currently being expanded, the Sculpture Park, the Formal Garden, rare specimen trees, marked walking trails and the Art School.

Of course, not all of history can be saved. Last month, Lands End, the Sands Point mansion said to have been an inspiration for Daisy Buchanan’s house in F. Scott Fitzgerald’s The Great Gatsby was torn down. The loss is a significant and sad reminder of just how important it is to preserve our history and enjoy the best of what Long Island has to offer.

Between the tours, concerts, events and exhibitions, many people may not realize how much is available to the public. Of course, it’s the homes themselves at the heart of it all. As a design-lover myself, simply gazing at the beautiful architecture and exquisite grounds takes my breath away. For more information about historic Long Island mansions and tours, visit historiclongisland.com.