In the 1960s, several Americans sought fame and fortune in England, landing in the UK just as the British Invasion of music and movies was about to sweep the world. American-born-filmmakers such as Stanley Kubrick and Richard Lester made their mark in England, as did record producers Jimmy Miller, Shel Talmy and Tony Visconti and of course Jimi Hendrix formed the Jimi Hendrix Experience in England. Another American who would make Britain his home and become most associated with British music was Joe Boyd.

Boyd was born in Boston and graduated from Harvard in 1964. For those in the music business who know the key players behind the scenes, Boyd is regarded as a Zelig-like figure, which produced some of the most important British artists of the 1960s and 1970s, such as Pink Floyd, Soft Machine, Eric Clapton, Steve Winwood and Jack Bruce. He would also produce Toots and the Maytals, Nico, and Maria Muldaur, including Muldaur’s smash hit “Midnight at the Oasis.” Yet, the artists with whom Boyd became most associated were the British artists whose music would best be described as folk-rock, but who would also move from folk to psychedelic, to rock, to art-song, including The Incredible String Band, Fairport Convention, Fotheringay, Nick Drake and John Martyn. In this period he would also produce Kate & Anna McGarrigle and Geoff Muldaur. Not only did Boyd produce albums for these artists, but also in many cases he was responsible for discovering them, and he released many of these albums on his own Hannibal Records label, which he began in 1980 and ended in the late 90s.

Speaking via Skype from his home in London, in a rare, lengthy interview, Boyd talked about his approach to producing. “I wasn’t trying to be Phil Spector. I was trying to be Ralph Peer,” Boyd said, referring to the pioneering country music producer most associated with Jimmie Rodgers and the Carter Family. “I was always making recordings with a consciousness of ‘Would I want to listen to this in 30 years time?’ That was always in the back of mind.”

Boyd talked about his tenuous relationship with the record business. “I’ve always been viewed with some suspicion by labels as somebody who delivers critically [successful] but commercially unsuccessful records.” One place in the record business where Boyd was welcome was Island Records. As chronicled in the recent The Story of Island Records: Keep On Running (Universe), to which Boyd contributed. Boyd’s Witchseason Production Company had a long, fruitful relationship releasing some of the classic English folk-rock albums of the late 1960s and early 1970s through Island. Recently however, Boyd and Island Records founder Chris Blackwell worked together again through Blackwell’s Palm Pictures label and the results were not as successful as in the past. “It was not easy,” Boyd began, clearly uncomfortable talking about a man for whom he still has deep respect and love. “We didn’t see eye to eye,” he continued. “This in a way is what put an end to Hannibal. It was part of a company that really was not a sympathetic environment for me to do what I do—and that’s with Chris Blackwell, who is very fond of me and who knows me very well, but was not comfortable with what I was doing and I wasn’t comfortable in his setup. And if I can’t be comfortable with Chris Blackwell, it wasn’t going to be easy. I love Chris and we’re good friends and I visited him in Jamaica last year.”

In addition to being a record producer, Boyd was involved behind the scenes in the 1960s at the Newport Folk Festivals, including in 1965 when Bob Dylan went electric. It was his suggestion that Mike Bloomfield join the Paul Butterfield Blues Band. Also, he was responsible for having the fledgling, Syd Barrett-era Pink Floyd play at the landmark London Free School’s International Times magazine 1966 benefit concert at the Roundhouse in London and co-founded the UFO Club, London’s answer to the Fillmore and the vortex of the British underground music scene.

When asked about his early days with Pink Floyd he fondly recalled the 1967 Games for May concert at Queen Elizabeth Hall in London and how the band was already starting to experiment with “Quadrophonic” sound. “Right after Arnold Layne they were becoming more ambitious from a visual aspect,” he recalled. As for Syd Barrett’s early influence on the group’s musical style, Boyd said, “Syd pulled them away from blues early on.” Speculating on what kind of influence Barrett would have had on the band later on if he had stayed with the group, Boyd said, “English music hall.” 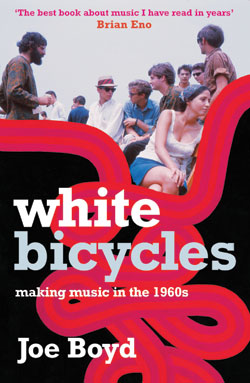 As the 1970s ended, Boyd could have easily slipped off to retirement with his place in music history secure. Instead, he continued to produce critically acclaimed albums for Fairport Convention, June Tabor, and Richard Thompson. In fact, Thompson’s collaboration with his wife Linda, Shoot Out The Lights, which Boyd produced, is continually regarded as one of the best albums of the 1980s. He also produced key albums for 10,000 Maniacs (The Wishing Chair), Billy Bragg (Workers Playtime) and Fairport Convention (the live House Full). He would also be the first producer outside of Mitch Easter and Don Dixon to work with R.E.M., producing the group’s now classic 1985 release Fables of the Reconstruction.

Boyd would become one of the leading forces in world music, producing such artists as Toumani Diabate, Virginia Rodrigues and many others. He would also produce Loudon Wainwright III, Taj Mahal, Defunkt and many others. From his Hannibal label there would be releases from Ali Farka Touré and Ry Cooder (long before the Buena Vista Social Club), Baka Beyond, and historic reissues from Sandy Denny, Robert Wyatt and Linda Thompson.

Of all the artists he has discovered, signed to record deals, produced or worked with as more than just a producer, he has had perhaps the most fruitful relationship with Richard Thompson. Guiding light of the early classic Fairport Convention, one of the music world’s most gifted guitar players and a songwriter whose pen never seems to run dry, Thompson continues to make truly inspired music and never rests on his laurels. Boyd’s only regret in his long relationship with Thompson is his inability to get Thompson to explore world music. Boyd explained why Thompson has for the most part avoided that direction. “Richard would have a horror of seeming to be jumping on a bandwagon.” This bandwagon, according to Boyd, consists of Ry Cooder, Paul Simon and Peter Gabriel, among others. “I think he would be better than any of them,” Boyd stated. “Richard’s talents are uniquely suited to going into another culture and taking that culture on its own terms and being a virtuoso in that context.”

For all his involvement with folk and world music, Boyd was involved in two blues-related projects. Of course there was the aforementioned involvement with the Paul Butterfield Blues Band. The other project was What’s Shakin’. Sometimes mistaken as a Lovin’ Spoonful album, the compilation release also included tracks from Butterfield’s band, Tom Rush, Al Kooper and a band that was credited as Eric Clapton and the Powerhouse. The band was put together by Boyd to add some tracks to the What’s Shakin’ album to be released by Jac Holzman’s Elektra label. Paul Jones of Manfred Mann was the one who brought the musicians together. At the time, Boyd was beginning a stint as Elektra’s man in London. Jones had approached him about a project he had and Boyd told him he was looking to get British blues musicians together for some tracks for Elektra, to which Jones asked, “who do you want?” “We put a list together on the back of an envelope,” Boyd said. The list included Clapton, Winwood, Bruce and Baker. Boyd said after Jones left he thought “Yeah, sure. That’s the last I’ll ever see of Paul Jones.” To Boyd’s astonishment, Jones rang him back straightaway and said, ‘No problem.’ Other than Baker, who was on tour with a jazz band, everyone else was on board. At the time Bruce was in Manfred Mann, Clapton was in John Mayall’s Bluesbreakers and Winwood was in the Spencer Davis Group. Due to contract obligations, Winwood used the name Steve Angelo (or on some editions Anglo). Boyd was not happy with the final results. “Holzman tried to take over the session and grabbed the tapes and mixed them in New York, he stated. “Eric told me about a group that he was going to put together with Jack and Ginger.” Boyd recalled that after telling Holzman about Eric’s new band, Holzman said, ‘I wasn’t that impressed with Clapton. You can sign them but you have a maximum budget for the record of 400 pounds.’” Of course, Cream ultimately signed with Robert Stigwood’s Reaction label and released its debut album in 1966 in England and on Atco in America in 1967 and the rest, as they say, is rock ‘n’ roll history.

Throughout his career, Boyd has also been involved in many film projects, including producing the first documentary on Jimi Hendrix and the soundtrack album released in 1973. He also produced tracks for Pink Floyd which appeared in the films Tonight Let’s All Make Love In London and London ‘66-‘67. His first feature film work was as executive producer for the 1988 film Scandal, starring John Hurt and Bridget Fonda, about Britain’s Profumo scandal of the 1960s.

In 2006 he published his first book, White Bicycles: Making Music in the 1960s (Serpent’s Tail), which Brian Eno, among many others, has said, is the best book about music he has read in years. His next book will be a book on world music.

On May 12th and 13th will be a New York Celebration of Kate McGarrigle at Town Hall, produced by Joe Boyd, featuring Anna McGarrigle, Rufus Wainwright, Martha Wainwright, and Emmylou Harris with more guests to be announced.

You can also check out Boyd’s radio show broadcast on Resonance104.4, Joe Boyd’s Lucky 13. On the air Fridays at noon live from London, which began in November of 2010, the show can be streamed on the Resonance104.4 archives.

As our conversation wound down, Boyd reflected on the recording process. “The studio was a mysterious place,” he stated. “It had a mystique about it. Now it’s much more of a technical process.”

On May 12th and 13th, there will be a New York Celebration of Kate McGarrigle at Town Hall NYC, produced by Joe Boyd, featuring Anna McGarrigle, Rufus Wainwright, Martha Wainwright and Emmylou Harris with more guests to be announced. For more information, visit http://www.joeboyd.co.uk.