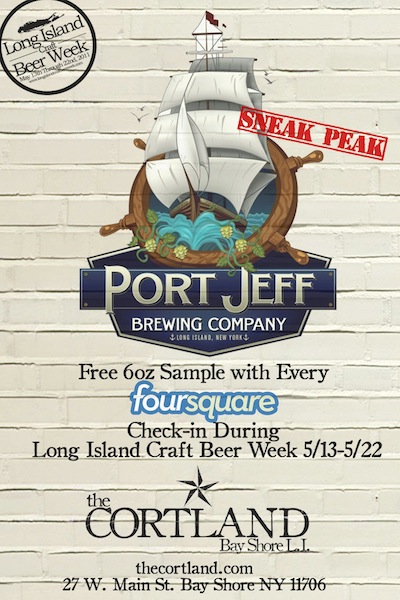 Snag a sneak peek of Port Jefferson Brewing Company, not set for official launch until July, at The Cortland during Long Island Craft Beer Week.

Patrons who “check-in” at The Cortland using the foursquare application on their smartphone will be rewarded with a complimentary sample pour of either Schooner Pale Ale or Port Jeff Porter.

Michael Philbrick, owner and head brewer of Port Jefferson Brewing Company, on the foursquare sneak peek: The entire duration of LICBW, Bobby at The Cortland will be offering a sample size of either Schooner Pale Ale or Port Jeff Porter when patrons “check-in” on foursquare with a smartphone. Although both will be there, the growing popularity of the Black and Tan mix of the two will be unlikely as they will rotate off the same tap.

However, you will be able to get Black and Tans (still working on a good name for that and am open to suggestions) at Kodiak’s on Wednesday 5/18 from 6-10 during their LICBW festival showcasing LI brewers and their offerings in a beer festival format with tables. We will be bring the Schooner, Porter, and Ryes-N-Bock (and possibly the Runaway Ferry IPA).

Lastly we will be offering a keg to the “Fill a Growler, Fill A Belly” campaign that Dave’s Bellport Cold Beer & Soda will be conducting. Fills will be $10 which all goes to charity and expected on tap will be our White’s Beach Wit.