They started popping up, one each day. One had big Elvis Presley hair. Another had thick horns protruding from his head. Another had a long knobby neck and exuberate eyebrows.

Every morning, artist David Geiser made a drawing. Every morning, someone completely different showed up on yellow legal pad or manila envelope. Pretty soon, Geiser’s private drawings morphed into The Daily Sketch—a series of illustrative characters that have become more narrative as the days went on. They were quickly bought up by collectors of his abstract expressionism paintings and welcomed into gallery shows.

“I got fascinated and got into an old rhythm that lay dormant,” Geiser said.

That old rhythm harkens back to a decade ago when Geiser was an underground comix illustrator and comix book producer.

Underground comix was a subversive and in-your-face type of comic book where sex, drugs, rock and politics formed an unflinching story and commentary. Underground comix featured panels where characters cavort and stories unfold. Art had a hand-drawn feel. Characters had exaggerated features. It was the subject matter that set underground comix apart. They were issued by alternate presses or self-published so their content wasn’t regulated by the comic book industry and roamed on the wild side.

The irreverent illustration scene unfolded in the sixties and seventies with the counterculture as a hub. Contributors included Rick Griffin (Grateful Dead album artist and psychedelic posters) and Robert Crumb (Keep on Truckin’ icon, Fritz the Cat). Crumb is the founder/producer of Zap Comix and is widely credited with launching the Underground Comix movement.

While a new illustrative voice was being born, Geiser was living in San Francisco bound for a fellowship to study art at Yale University after graduating college. Feeling that something unusual was happening, he declined his Ivy League admission so he could tap into what was around him, he said.

“I felt like I was in the middle of something that was happening right now and then,” Geiser said. “I feel like I would have missed something important if I went back northeast to study at Yale.” 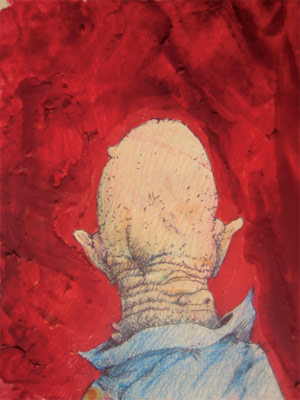 By the late seventies, the scene had mostly run its course. Geiser began painting again and moved away from illustration. As a painter, Geiser’s known for his abstract expressionism works that conjure impressions of nature, narrative and history. These impressions arise from Geiser’s composition choices, layers of paint and multiple textures that conjure a history.

Some months ago, the East Hampton artist found himself in a rut and began doodling while drinking his early morning coffee. Characters began to spout. He scanned the drawings and emailed them to friends and collectors. The response was immediate—everyone loved receiving the visual surprises in their inbox, he said. Sending drawings or art through the mail was nothing new for Geiser. Kicking it up Internet style was.

Now he has two directions for his art, Geiser said. Paintings will continue on the gallery track. Mass reproduction again holds appeal.

“I’ve come full circle,” he said. “People are excited about the drawings. Galleries are offering me shows…I’m drawn toward the possibilities of odd literature paired with the drawings.”

The future of The Daily Sketch characters is in flux. A book is in discussion. A line of cards is possible. So is a cell phone app. No matter what happens professionally, keeping the sketches fun with a bit of kick is important to Geiser. So is allowing each character or scene to sprout its original story. In other words, Geiser draws and the characters come out to play.

“I see myself as the conductor of a great orchestra,” he said. “I conduct the elements. The process is to make the drawings, not figure out what they mean. That’s for the audience to decide.”