Monte Hellman’s new movie is entitled Road to Nowhere. The title may bring a bittersweet smile to longtime fans of the brilliant director. Half sweet because it would be an apt moniker for most of his dark journeys, while the bitter half comes from the knowledge that the title could also describe a career that has resulted in great films, but with one near-exception has never resulted in the wide acclaim that he deserves. However, after seeing Road to Nowhere, Hellman fans will be smiling unambiguously with pleasure that this latest work represents a strong return to form for this unique filmmaker after over thirty years wandering in the filmmaking wilderness. 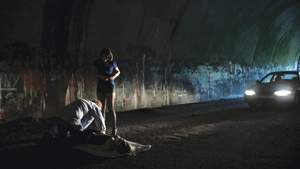 Monte Hellman is one of many to get their filmmaking education from the legendary Roger Corman for whom he directed Beast from Haunted Cave (1959). After a few years in the mad world of Filipino exploitation movies, Hellman collaborated with his friend (and fellow Corman alum) Jack Nicholson to create a pair of excellent westerns: Ride in the Whirlwind (1965) and The Shooting (1968). Both films, but especially The Shooting with its chilling tale of two cowboys lured on a doomed expedition by a mysterious woman, revealed Hellman’s distinctive universe. Hellman’s protagonists are always wounded souls who find themselves on a journey to a shimmering mirage that proves to be an existential dead end. Hellman’s next film, his first for a major studio, was highly hyped to be a major counterculture hit in the vein of Easy Rider. Esquire (which published Rudy Wurlitzer’s screenplay as its April 1971 cover story) declared Two-Lane Blacktop to be the “movie of the year.” Hellman’s tale of car fanatics in a cross-country race that devolves into a mesmerizing portrait of a lost America was undoubtedly his masterpiece but too quiet to match the pre-release hype, and quickly disappeared. 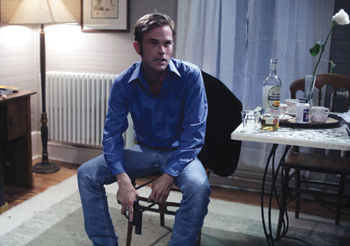 Road to Nowhere takes Hellman back to his low-budget roots and forward into the new world of digital production. The movie tells the twisty neo-noir tale of a film crew shooting a true crime saga about a massive scam that ended in multiple deaths. Things get messy when director Mitchell Haven chooses an unknown actress to star in his movie. Mitchell becomes increasingly obsessed with his enigmatic leading lady who may have a secret connection to the actual crime. Mitchell’s obsession and her dangerous game lead them both down a rabbit hole from which there is no escape. However, no synopsis can do justice to the Chinese box-like structure of Hellman’s work. Careful viewing is required to decipher which events are “real” and what is the film-within-the-film, with even the credits being playfully deceptive. At age seventy-nine, Hellman has created a powerful and haunting work that can stand with his best films. The film is too off-beat to make Monte Hellman famous, but should expand awareness of this great filmmaker.