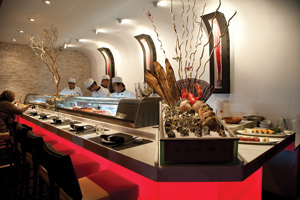 First, the good news. A women’s clothing store and then a bagel shop in Huntington Village has been replaced by Kashi Sushi Lounge, a dazzling new Japanese restaurant. All the “S” words apply at Kashi. It’s stylish, sophisticated, slick and sleek. Its super, modern features include a harmonizing blue and black color scheme, white and black leather chairs, a curved white ceiling over a gleaming sushi bar, a wall-to-wall, cutting-edge glass-fronted wine compartment, a graceful one-of-a-kind chandelier and candles that provide a fashionable big city milieu.

The food too measures up and costs less than the luxurious surroundings here suggest. While some dishes are better than others, on a recent visit, there were no failures and everything was competitively priced considering its quality. The menu is full of all the expected dishes (sushi, sashimi, rolls, tempura, teriyaki and hibachi preparations) with an occasional unusual listing (yellowtail jalapeno, tuna tortilla) all of which delight more often than disappoint. Despite those Latino twists on Japanese standards, the food here is short on innovation for innovation’s sake.

Conservative eaters will be delighted with crunchy surfaced, greaseless, light-as-air tempuras. Rock shrimp ($8), shrimp or chicken ($7) and a shrimp and vegetable entrée ($16) are all exemplary renditions. Seafood bisque ($9) with scallop and shrimp accompanied by a garlic mozzarella bread will appeal to the more adventurous. A speck of crab meat-avocado salad ($10) can be inhaled in one breath. The tricolor, three-way sushi ($23) delivers the expected (salmon, tuna, yellowtail) but an exceptionally fine, fresh version of it. Rolls, especially signature rolls, are the most creative, intriguing portion of the menu. Try the cool, diverse, Sweet 16 ($12) with its interesting meld of shrimp tempura and cucumber topped with lobster salad, seared pepper, tuna and avocado in a spicy citrus sauce or Sunset Blvd. ($12) a mix of salmon, yellowtail, spicy, crunchy tuna enhanced by its drizzle of plum reduction. 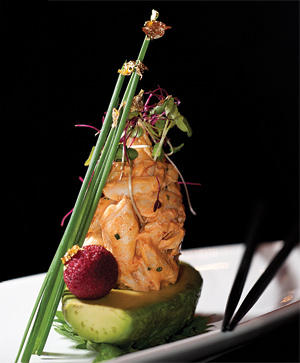 Now for the bad news. The young Japanese waitresses give sweet, but slow service. They are inexperienced and at best only partially trained and Kashi’s sound level, especially on crowded weekends, is nothing short of bone rattling.

Our ever-hovering waitress asked us to order three times in five minutes as we tried to read the six-page menu. She served the wine in reverse order (the host first, rather than last), delivered our fourth entrée as the other three diners were finishing theirs and cleared dishes while people at the table were still eating.

In her defense, it must be said that we couldn’t understand her and she couldn’t understand us because of the unrelenting noise roaring out of the bar and ricocheting off the restaurant’s hard surfaces. Everything at Kashi is far too loud, from the disco beat over amplified music to the screaming young crowd it attracts. Twenty and thirty somethings who equate noise and fun no doubt will enjoy themselves, others should be forewarned. 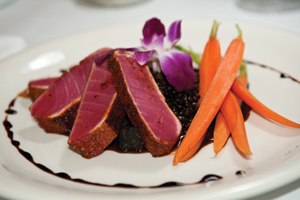 The Island has a long-lasting love affair with Italian restaurants. They need not be perfect to be popular although they do have to serve reasonably good, familiar, Italian comfort food in warm, friendly surroundings. Bel Posto in Huntington is just such an establishment. All the components are in place at this affable, white tablecloth spot in the center of restaurant-rich Huntington Village. Its modest prices, gifted chef, upscale yet unpretentious dining room, convivial bar, friendly hustling waitstaff and menu studded with classic Italian dishes like ravioli, rigatoni, risotto, meatballs, calamari and lasagna make it typical of the type of eating place that so many diners covet.

Both Michael Ross, the chef, and the restaurant’s location have been around the block more than once. Mr. Ross has seen service at Fiddleheads in Oyster Bay and Huntington, Jedediah Hawkins Inn in Jamesport, Gabrielle’s in Rockville Centre and 24 Fifth Avenue in Manhattan as well as the Ross/Schaudel Catering Company on the North Fork. The 15 New Street location has been home to Orlando, Tello and most recently Mangiamo. He specializes in using traditional techniques with fresh local ingredients.

Dishes here range from standard to noteworthy to just a few strikeouts. Among the just ok possibilities were a menza-menza off-white New England clam chowder ($8), some soggy fried artichokes ($10) and a seafood mixed grill ($25) that was a mixed bag of fresh and over-the-hill ingredients. They were outnumbered by the more numerous noteworthy offerings like a column of tasty New York State duck prosciutto ($5) paired with a row of mini bread rounds enhanced by two circles of creamy Long Island Chévre goat cheese ($4), a tender roasted cured pork loin enlivened by a snappy mustard sauce ($23), an imaginative meld of shrimp, scallops, crab, vegetables and herbs in a moist risotto ($26). An eggplant Parmesan di Modern ($19) yielded admirable flavor but needed a bit more sauce. 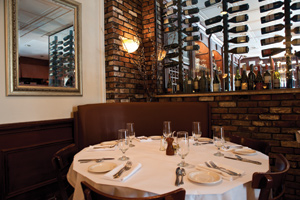 Three other desserts are enthusiastically recommended: A rarely encountered, interesting, understated olive oil almond cake ($7) with orange vanilla syrup and a scoop of mascarpone gelato blends with the meal rather than overwhelms it with cloying sweetness. A couple of other finales worth attention are the colossal hunk of decadent blueberry white chocolate bread pudding ($7) draped with crème anglaise and accompanied by a big puff of whipped cream and the silken butterscotch pudding ($7) topped with whipped cream that’s sprinkled with pine nuts.