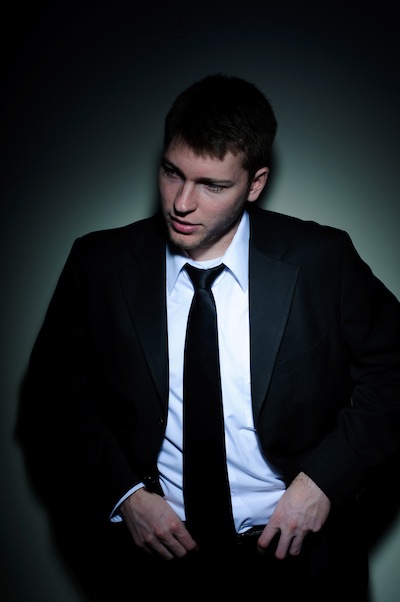 What does twenty-four-year-old LI native, JB Baretsky, like about the jazz and Big Band music eras?

“The stage performers from that era have always appealed to me,” says the jazz/pop singer. “I feel like I have something in common with performers like Frank Sinatra and Mel Torme. They have a way of making lyrics touch people emotionally and that’s something I always wanted to do. On stage, people like Bobby Darin and Sammy Davis, Jr. had an unbelievable way of making people sit back in their seats and smile. And I feel that’s what entertainment should be all about.”

Born and raised in Central Islip, Baretsky attended St. Joseph’s College in Patchogue and now lives in Commack. And while he can play everything from piano and harmonica to trumpet and bass, Baretsky concentrates on singing onstage, and is often accompanied by his quartet called The Third Q (guitar, bass, keys and drums).

When you see the charismatic performer live, you won’t just hear classics like “Fly Me to the Moon.” Baretsky recently recorded some fresh, jazzy renditions of pop hits “Dynamite” by Taio Cruz, and “Cooler Than Me” by Mike Posner, which can be heard, along with his classic covers, at http://www.youtube.com/user/jbbaretsky.

With few jazz artists in the mainstream, comparisons to Michael Buble and Jamie Cullum are to be expected. But Baretsky sees some distinctions:

“In all honesty, it’s a big compliment to be compared to them,” admits Baretsky. “I do feel that my voice is more raw, and not necessarily as cookie-cut as the rest. In other words, I’m rough around the edges, but I think that’s what people like about me.”

Baretsky has several original songs in the works, and expects to release a CD in the fall with originals, jazz standards and some contemporary remakes, which “help capture a wider audience,” and introduce listeners to some of the classics and other work he does.

Until then, head to Lincoln Center on Saturday, June 11th at 1:30pm to see JB and his guitarist, Tom Sheridan, perform in front of 30,000 people at the 35th Annual American Craft Festival. (Baretsky is also booked there for June 19th)

Expect to hear everything from “Birth of the Blues” by Sammy Davis, Jr. to “Slide” by the Goo Goo Dolls. And maybe even “Mack the Knife.”

“’Mack The Knife’ is my favorite old standard to play live,” notes Baretsky. “It’s amazing how much of a crowd pleaser it is, and at the same time, the song is about murder. I also like the fact that I’m able to sing and tell a story with it.”