The diamond is firmly on your finger, third from the thumb, left hand, snuggled next to your pinky. It’s a beautiful ring, sparkly and just as meaningful as the ceremony at which you got it.

Oh, you’ll never forget that ceremony! There you stood, promising to cherish your beloved always. Flowers were everywhere. The best man cracked jokes. Your mother cried. And you ended that day with a celebration that friends and family are still talking about.

So why did you do it? Was love the sole reason for the ceremony, the ring, the best man, or the wedding whoop-it-up? Find out in “A History of Marriage” by Elizabeth Abbott.

Whether you had a quiet religious ceremony or televised nuptials, whether you wore frippery or flip-flops, your wedding probably started like nearly everyone else’s: boy meets girl, boy dates girl, boy marries girl.

But it wasn’t always a grown-up affair. Hundreds of years ago – and, indeed, until relatively recently – boy met girl in preschool.

Child marriages, says Abbott, were one way to cement social relationships and to prevent scandalous out-of-wedlock pregnancies. But pity the Chinese bride, who was often raised by her in-laws to ensure that she was familiar with their “personal needs.”

Just like every couple starting out, you had bumpy spots. The good news is that you had plumbing and heat and a chance to know your beloved before the ceremony, unlike 737 women who traveled from France to New France (now Canada) in 1670. The les filles du roi arrived in the wilderness, intended to be the intendeds of fur-traders and colonists. Despite the hardships, the experiment worked; Abbott says that millions of French Canadians are descended from the ensuing marriages.

But your marriage is unique… although that’s nothing new. Early unions didn’t require a ceremony; a couple simply agreed that they were married. Unstable slave marriages were sometimes allowed and sometimes forced – multiple times. Wedding gowns were once practical, and rarely white. A bride’s virginity (or lack thereof) was announced to all by the shape of a wreath on her head. Families have always gone heavily into debt for receptions, children were always expected to follow soon after the nuptials, and divorce was always available if things didn’t work out.

Oh, and gay marriage? It’s as ancient as civilization.

Looking for something engaging to read this summer? Then say “I do” to this book.

From the centuries BCE to just a few years ago, author Elizabeth Abbott lifts the veil off the world’s betrothals, weddings, and ceremonies, and the customs that influence all three. Then she examines how cultures have influenced wedded bliss, what happens when marriages are broken, and where hitching is heading in the future.

This book is like taking a centuries-long, world-wide trip down a petal-strewn aisle, and I loved it.

If you enjoy a good wedding, are first in line to dance The Hora, or you’ve divorced yourself from boring reads, then find “A History of Marriage.” For you, this book has a ring of fun around it.

* * *
And if you’re getting married soon, look for “Bride Ideas and Frock-Ups: A Book of Wedding Tips & Slips” by Sim Canetty-Clarke, Amanda Lockhart, and Susannah Frieze (Bene Factum Publishing, Ltd). Filled with pictures, anecdotes, trivia, quotations, superstitions, and cute ideas, this book is delightfully British and wonderfully light. It would also make a great shower gift for a curious bride, or a nice memento for the bridesmaid who also wears a ring on her finger, left hand, snuggled next to her pinky. 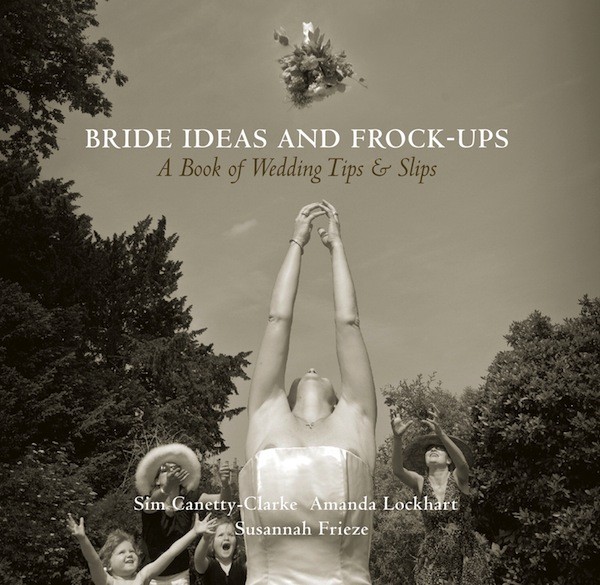