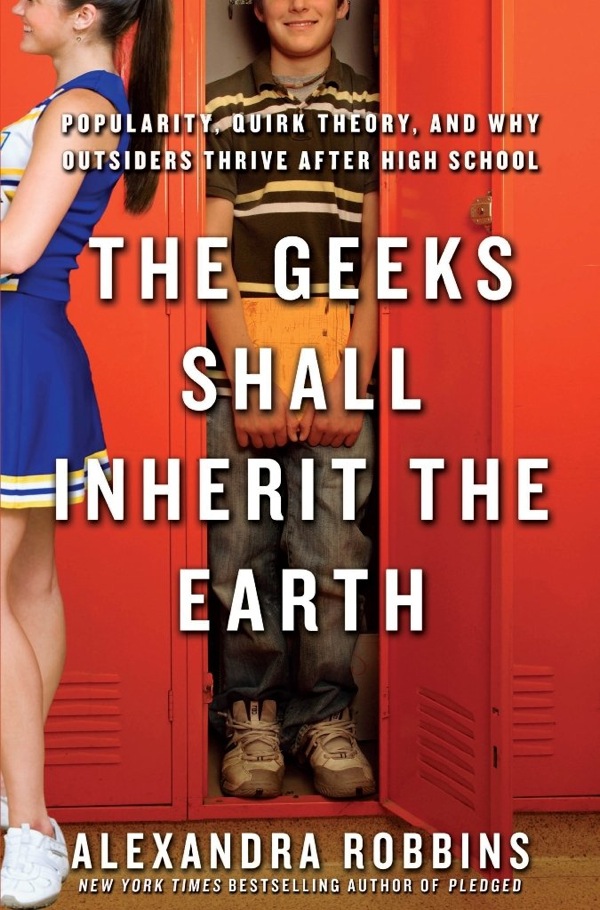 Aliens have stolen your teenager.

How else could you explain that your free-spirited, happy,
formerly-school-loving child has suddenly morphed into a mime with a
dark mood? What other reason could there be for her Saturday nights
home, his disinterest in friends, their dread of school days that are
weeks away?

You’ve got your suspicions. You lived through high school, too:
social jostling, too-tight cliques, self-consciousness, embarrassment,
ostracism, teasing. It supersedes everything, causes angst, and you
remember it well.

But you turned out okay, and after you’ve read “THE GEEKS SHALL
INHERIT THE EARTH” BY ALEXANDRA ROBBINS, you’ll understand that your
teen will, too.

Movies are based on it. School administrators try to lessen it. But ask
any high school student, and you’ll get an earful about cliques,
fitting in (or not), and popularity – likely, much of it gloomy.

Robbins calls the kids who don’t fit – the emo kids, nerds, geeks,
loners, bandies, freaks, and such – the “cafeteria fringe.” Those
are the kids who eat alone because the in-crowd won’t allow them seats
at the “good” lunchroom tables.

But, after thinking about her own classmates, post-graduation, Robbins
devised a theory about cafeteria fringe kids. She calls it Quirk Theory,
explaining that “… the differences that cause a student to be
excluded in school are the same traits… that others will value… or
find compelling about that person in adult-hood…”

To prove Quirk Theory, Robbins spent a school year following a gamer in
Hawaii; an Illinois loner; a popular girl in New York; a “weird
girl” in Georgia; a Pennsylvania band geek; a nerd in Virginia; and a
California “new girl.”

Robbins studied peer labeling and how quickly it happens – often, for
no solid reason. She examined popularity and how it can positively be a
negative. She questioned why popular kids can be mean; why differences
are condemned yet conformity is as important as individualism within a
clique; and how teachers’ behavior sometimes mirrors that of their
school’s halls. And she shows how today’s nerd is tomorrow’s CEO.

Then Robbins challenged her seven subjects. Could they ignore and
overcome their own labels to make friends with kids from other groups?

It’s hard not to have your heart broken when you’re reading “The
Geeks Shall Inherit the Earth.”

With the seven people whose stories she presents, author Alexandra
Robbins shows us what it’s like in high schools around the country,
which is (no surprise?) the way it’s always been, but worse. No matter
where you fit in as a teen (or didn’t), you’ll ache to see yourself
with a reverse telescope.

You’ll especially ache if you have a teenager, but Robbins doesn’t
leave her readers hanging. She gives end-of-the-book advice for
students, parents, and teachers who want to overcome cafeteria
fringe-ness. And I don’t think I’m ruining anything by telling you
that you’ll also be rewarded with seven triumphant, happy endings.

Preps, dorks, nerds, and anybody who cares about them can’t go wrong
by reading this book. For you, “The Geeks Shall Inherit the Earth”
just… clicks.