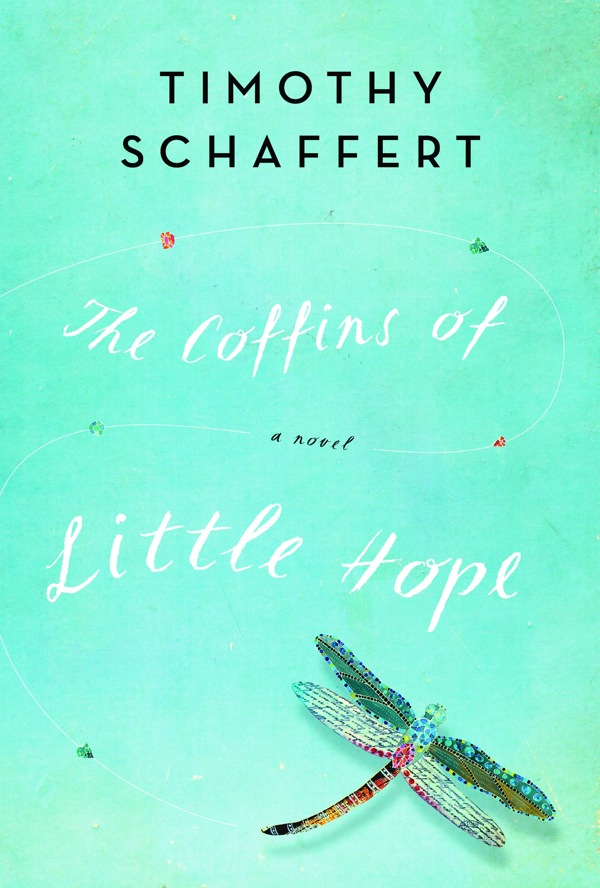 All too often, as of late, we’ve seen it happen: a child goes missing and the town comes together to find her.

Neighbors form human chains. Helicopters search from above and boaters skim the waters. Psychics claim to “know” where the child is, and rumors spread as police chase every lead… just in case.

But sometimes, as we’ve seen, we’ll never know everything – least of all, the truth. And, as in the new book “The Coffins of Little Hope” by Timothy Schaffert, nothing is ever as it seems.

For most of her 83 years, Essie Myles had been the obituary writer for the County Paragraph, which her father started in their tiny Nebraska town, and which her grandson, Doc, still ran. Like many small-town newspapers, its pages were usually filled with county fair results and church news.

But then, Lenore disappeared.

Looking back, it seemed odd to the townspeople that Daisy, the girl’s mother, had allowed an aerial photographer to move in so quickly. It seemed that the man, Elvis, had come to town one minute and was canoodling with Daisy the next.

Daisy said he loved her daughter dearly. He was good with her and good to Daisy.

But then Elvis took Lenore. Disappeared, just like that, away in his plane, leaving Daisy alone again on her tumbledown farm.

For weeks, people came from around the country in support. They searched for the child, until someone finally noticed something odd: Daisy’s house held no little-girl things. No storybooks or dresses, no dolls or barrettes. And, come to think of it, nobody had ever actually seen young Lenore in person.

A newspaperman by virtue of birth, Doc knew Lenore’s disappearance was another way to keep the County Paragraph afloat. He’d already taken on book publishing, and was the secret printer for the insanely popular Miranda and Desiree series, of which the eleventh and final book was in the works. And if Doc thought everybody in the Midwest was spellbound by Lenore’s disappearance, well, they were positively frothing over this ending.

But just like the last Miranda and Desiree book held secrets and solutions, so did Daisy – and so did Essie’s family.

Reading “The Coffins of Little Hope” is like walking lazily down a country road. You can almost smell the clover. You can hear the cicadas. It’s dreamy and nearly ethereal. But I didn’t like it at first. I started it, stopped, and started again.

Author Timothy Schaffert doesn’t waste any time piling on the quirk, which is initially disarming but which allows his story to quickly shatter in to so many alluring pieces that you ultimately won’t be able to resist any of them. His characters are small-town eccentric, almost stereotypical, but a bit of enigma clings to some and a hint of mystery surrounds them all. This is an odd book, but oddly beguiling.

Like me, you may have a hard time starting it, though, but try it and stick with it. “The Coffins of Little Hope” is, overall, a book not to miss.