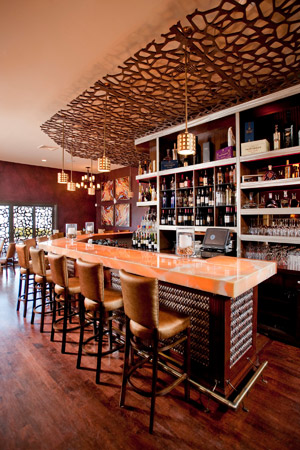 The name Conklin is revered in Huntington. The Conklin family was one of the town’s first settlers in the 1700s. Abel Conklin, a distinguished 19th century Huntingtonian, built a house in the village in 1841. Years later, a restaurant in that house bearing his name became a popular focal point on the active Huntington dining scene for over 25 years. Recently, it was replaced by Vitae (“life” in Latin), an upscale restaurant and wine bar that in the early going promises to have a long run of its own.

Among its virtues are a modern, sophisticated interior sprinkled with original artwork, a charming outdoor patio, Lawrence Palladino, a seasoned CIA-trained Executive Chef with extensive experience in Manhattan and on Long Island, a diverse 40 entrée continental-American menu and an interesting, though pricey, wine list of new and old world selections (bottles start at $30 and end in triple figures). Although these pluses outweigh the minuses, both nevertheless deserve attention.

The unbelievably noisy sound level when the restaurant is busy, which on weekends it is, makes table conversation virtually impossible. That and eager-beaver bus boys who want to pounce on plates as soon as they are empty, even as people at a table are still eating, were the only problems noted. 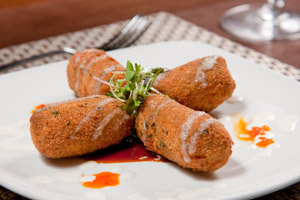 Fortunately, most of the food and the service were more than satisfactory. The rustic, crusty bread that quickly appears on tables, along with butter and olive oil is a promising preview of things to come and an indication that the people who run Vitae want it to be a serious destination restaurant. It was promptly replaced after the last slice was enthusiastically devoured. That noteworthy bread was followed by crab cakes ($13) boasting plenty of crabmeat and relatively light filler catapulted to a higher level by its lobster remoulade. The competently-cooked short rib croquettes ($9) sporting a red wine demi-glace with horseradish and crème fraîche sounded a bit more exciting than they tasted, but nevertheless passed muster as did the Buffalo Mozzarella ($12) featuring a summer ripe tomato salad. A colossal, classic wedge salad ($9), punctuated by high quality ingredients (crumbled bacon, Stilton blue cheese, diced tomato and croutons), is recommended even to diners who don’t ordinarily order this type of dish.

Among the entrées sampled were: A huge, fall-from-the-bone rack of baby back ribs ($27) with a big batch of crisp, house-cut French fries, coleslaw and a salad boat of thick, smokey barbecue sauce; an unusually tasty pasta primavera ($19) that profits from its lively seasoning; plump, puffy jumbo seared scallops ($28) accompanied by a creative plate mate of shrimp and chorizo paella; and veal chop Vitae ($32), or a tender king sized grilled T bone, with harmonizing accompaniments like a Gorgonzola polenta cake, sautéed broccoli rape (rabe) and a rich rewarding porcini mushroom sauce. 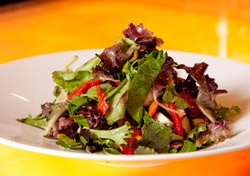 The sweets at meal’s end included a decadent molten lava cake ($8), a respectable, no surprise pecan blondie ice cream sundae ($8) and two outstanding dessert specials (the prices of specials are not recited or printed), a fruit festooned strawberry shortcake and best of all a creamy, luxurious goat cheese pudding with the texture and richness of New York cheesecake and a restrained, rather than a cloying sweet taste, provided an admirable finale to a fine dinner.