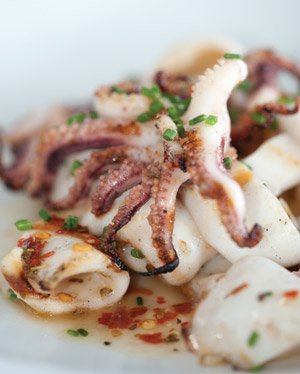 It’s hard to find the TR Restaurant, but it’s worth finding. That was especially true on a dark, stormy night as we drove in circles around Hampton Bays through pouring, pelting rain, explosive lightning and booming thunder. Finally, through the tempest, we came upon Tully’s Seafood and Market and “Voila.” There tucked behind it on Foster Creek, which feeds into Shinnecock Bay, was the TR Restaurant and Bar.

It’s a rustic, rough-hewn seafood spot amidst boat yards and marinas. The warm welcome and homey atmosphere we encountered, plus a few fast glasses of wine, made our early travail fade quickly, as did a prompt serving of soft, warm rolls.

TR Restaurant is a casual, nautical, laid-back, paper-over-table-cloth kind of place. The fish are fresh, the croutons in the large Caesar salad are house made and the substantial soups taste like they could cure a cold.

The young, green, inexperienced staff is lovable and impossible to dislike as they learn their craft. Somehow they fit, for TR Restaurant isn’t a fancy or pretentious place. It offers down-to-earth food at down-to-earth prices, most of it quite good.

Owner Tom Rutyna, who made a name for himself as Executive Chef at the Coast Grill in Southampton for a decade, has a winning way with fish. His grilled whole sea bass fish-of-the-day ($26) tasted as though it was caught minutes before it was served. The Louisiana-style barbecue shrimp ($24), with rice and black beans, delivered the expected big-bang flavor and the Long Island duck breast ($28) was cooked to medium-rare perfection as ordered, although not particularly enhanced by its soy ginger butter sauce. The only entrée that disappointed was unseasoned, flat, tasteless pappardelle with sea scallops, pistachio, pesto and grape tomatoes, ($27). The corn on the cob accompaniment to some entrées was slightly overcooked, but not enough to stop anyone from eating it. And the runner serving our table had no clue about who ordered what, but that wasn’t enough to make us dislike this very likeable young man. 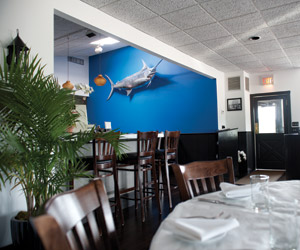 Aside from the fact that appetizers came without silverware and staccato style (three together, then after a lengthy wait, the fourth arrived), there were no taste or flavor complaints. Little-seen billi bi mussel stew ($6/$8) was dense with first-class ingredients, ivory white, thick and rich.

The classic Caesar salad more than lived up to its billing. Two tiny crab cakes ($12), with a tangy mustard sauce, were light on filler and heavy on crabmeat and long, fresh-grilled Maya prawns were packed with flavor and worth every penny of their $14 tab.

All desserts were priced right at $7. I’d stay away from the tasty passion fruit tart with a mango glaze because of a rock-hard, fork-bending crust. Instead, opt for the moist Almond pound cake with berries and whipped cream, the robust chocolate cake with its caramel sauce and the light ricotta cheese cake with its sliced white peach plate mates.