Owens is an artist’s artist—all exploration, no apologies. He uses any means possible to move forward in his pursuits (wood carving, illustration, classical painting), and maintains his personal “country sensibility” by leaning on purposeful idioms and bending the pillars of machismo rather than succumbing to the art world’s latest gimmicks.

“I love old fashioned ‘boy stuff’ [like] hunting and trapping…but it’s for girls, too.” His bootstrap pragmatism and the long military history of his family certainly inform his attitudes, and it comes through in his art, but so does his walk on the urban side, which leads to design work “hand made in Photoshop.” He is playful, honest and optimistic, and so is his art.

Owens’ nostalgia for bygone days is as obvious in farmyard animal portraits classically rendered as if to revere them, as it is in his sampling of art—designs from early agricultural America or his incorporation of elements of steam-punk culture. Though he concedes the old days “weren’t simpler—The Depression? Vietnam? Yikes,” he is careful in his apprehension of contemporary culture’s transience, “nothing is legendary anymore…angst doesn’t make you better.”

The pendulum swings wide in Owens’ pursuits, “humans are complex and ironic…death is primal—we hunt to eat—everyone should know how to hunt, shoot, knit, write a poem…” and this worldview is perhaps the basis of the work his peers find so compelling, and in fact, so significant.

His nearness to death allows him to be almost sentimental about it and leads to his questioning of human actions edging on the “insane” (drunk driving, drug addiction). Morbidity with a twist of the absurd and a healthy dose of psychedelia might sum up the art. Gumption and tenacity, its bedfellow, might apply to this advocate of the lowbrow who “always want(s) something new…doesn’t want to be one thing” is thriving in “the spontaneity of art” and finding “joy in the mistakes” as they come. 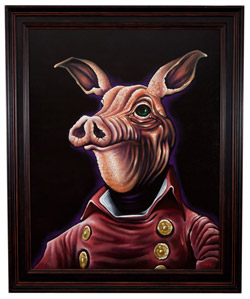 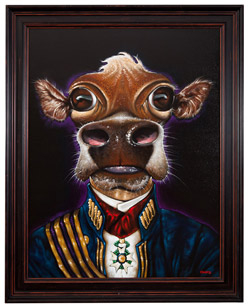