“Sometimes, the suggestion can be more powerful than the idea.” –DP

There are some paintings you stare and stare at, but no matter how much you see, you can’t figure them out. So you go back and stare some more. Still nothing. And then it hits you—it’s because the painting is looking back at you, and in its reflection of you, it’s as if you’re looking through yourself. Dalton Portella’s works are like that, haunting you even weeks after you (try to) put them out of your mind. When painting, as opposed to his photographic works, the artist’s MO is to “say as much as possible with a single mark,” and in this, he’s tremendously successful. He is partial to oils for the ability to “push them around” on the canvas and brings the hot colors of his native Brazil (yellows and reds) into his moody backgrounds because he finds them to be more expressive than neutral tones. In fact, his figures rest on the canvas almost in defiance of the backgrounds.

Technically, the works are sensual and expressive but still hold onto the figurative and symmetrical values often abandoned in modern art. He is trying “to break free” from the palettes and this exploration renders a distinctive feeling of friction that is unsettling at first, but then slowly relaxes into something else, something altogether familiar and tender. The works communicate phantoms of broken people, perhaps, and vulnerability, certainly, despite their large size. The sense of dislocation, fragility and humility in them are anchoring; you can’t help but think about your own delicacy. Maybe it’s because these subtle, delicate strokes are in such juxtaposition to their backgrounds they create a sense of hope, and it’s so palpable, it stays with you. The formula brings this artist’s works to a new entry point for abstraction, which is what makes him so current and so noteworthy. 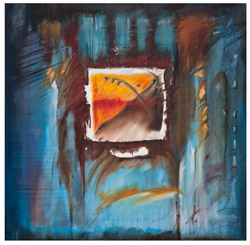 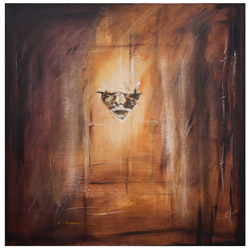 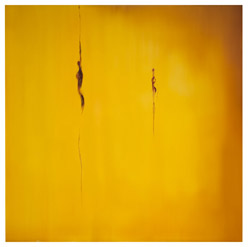