Typically, when a sculptor works on a piece, s/he will bring it along through conception and design, but send the mold off to a foundry for the final, actual sculpting. This sculptor’s process differs in almost every way—he cuts up pieces of bronze and welds them together and then, usually, adds a patina in brown, black or green. He likes the physicality of the cut-grind-weld process, but also the close connection that allows him to evolve through the accidents. “It’s direct…I don’t lose touch while it’s at the foundry” and it’s the directness of the pieces that is so attractive.

The work is honest, blunt, like punk rock, but as inventive and mysterious as jazz. His approach is less surreal than philosophical in his endeavor to create a “simple, metaphysical space…something mysterious and unique.” From first gaze, the sense of movement is evident. The structures are not squared off and static, but slightly reaching away from their anchorings. They seem to be dark, broody, heavy pieces, but their soft underbellies are evident, which is likely why they are not threatening (and they size in mainly under 2ft to make for manageable contemplation). “It’s not happiness or sadness… it’s transcendent. Maybe an equilibrium,” is how the artist considers them.

“There’s a lot of contradictions,” which is true, as is the sense of balance. Watching the air pass through the works is an exercise in telepathy. In those moments, the viewer can abandon his own thoughts to consider “the sculptures are waiting for something to happen next,” which becomes transferable to how we regard passersby in our lives. And this might be the secret to the art’s universality.

Ironically, the larger slabs are often supported by smaller pieces, sticks even, aiding in the kinetic feeling and creating “a sensitivity—something poetic, which indicates some sensitivity.” Ultimately, the pieces are an interplay of space, light, air and contrasts coming together at the artist’s fingertips as he is “trying to get some kind of atmosphere” and his works are “still but moving” towards “a timelessness.” Individually, the pieces articulate none of this in a specific, representational way. The grace of the work is it believes in you enough to let you figure it out for yourself. 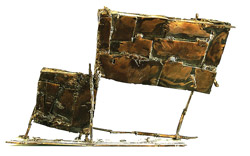