The trick of iconography is to portray the marvelous in the immediate to make it accessible.

And so too is the art of Scott McIntire—even his medium of choice has instantaneity (enamel dries very quickly), which he uses for its “thick, vivid and earthy quality.” But McIntire is not proselytizing, not even close, and he’s not trying to sell you something either; his panels are “not a recording [but] a relation” of our immediate environs, both those we see (water tanks, tractors, power lines) and those we don’t…like energy fields. He draws as equally from printmaking, silk screening and potato stamps as from his varied professional experiences with textiles, op-art and photo realism. He “loves the primitive”—sees connection between tribal art and American folk art—as well as the exactitude of hard, straight edges of stripes, which are frequent visitors in his panels.

The work is decidedly masculine, either by concentration of “male things” like tractors or by more phallic suggestion (the top of the Chrysler Building, a conical cluster of flowers), but there is a careful inclusion of the feminine (milkshakes, homey patches of quilts). Maybe it’s a dialogue of the two genders, or maybe he’s asserting a new vernacular in pop art—his trajectory seems fixed on intersecting the cultural, like an Asian kimono-shaped painting comprised of elements of Americana, as well as the ironical, like characteristics of industrial skylines posed in front of glam neon colors.

“Water tanks and power lines are silent necessities…[and] look humanoid,” and although people mostly attribute them to marring our natural landscapes, McIntire sees them as “essential to our conversation.” And so he includes them, “rhythmic silhouettes” dancing among his signature “energy fields,” which he articulates by rendering circular lines, patterns and/or spheres that interact with each other (and vibrate his early op-art work). 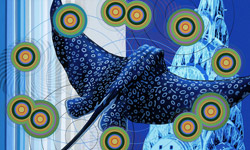