Despite the thousands of miniature objects she has collected to stage her art, Vicki Ragan is attached to a gauzy, gossamer dress. This “muse” is a constant in her work, appearing in a multitude of settings as a depiction of the “human spirit, the presence of a person without the person.” And whichever of her silver prints the “model” appears in, the sense of lightness and travel, and even femininity, is obvious.

Ragan “works intuitively, not based on a specific intellectual concept” though she remains partial to silver prints for the dress series because of the way the final photos reflect light, heightening the preciousness of the image. Indeed, the prints seem to articulate a softened, spectral lightness, as if the subject (dress) is being resurrected from the background just as you, the receiver, are from your place and time. This might be what she means when she says the “images create connections [for viewers that] have an obvious emotional appeal [even] without knowing the syntax.”

And she plays with this disconnect, leveraging it to the ephemerality of the dress/spirit/muse, by placing it (her?) in settings that are antithetical to the delicacy of the fabric—austere backgrounds convey a sense of the empty or spent past. If people are in the picture, they’re relating to the subject, rather than becoming part of it; Vicki intends for her muse to stand alone.

This quirkiness, which may only hint at the macabre in the dress series, becomes fully realized in her collages and sculptural photos, which she refers to as “thoughts ready to be processed.” She arranges extracts from her endless sea of collected miniatures into dioramas or stages vignettes she photographs (some of the scenes are later framed and become shadowboxes). By repurposing elements (complete or partial), like matchboxes, shells, nautical references or dolls, she abolishes the linear idea of time and instead fashions testimonials that reference time suspension. 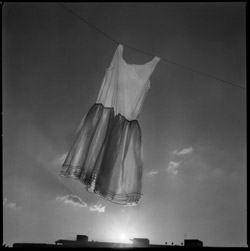 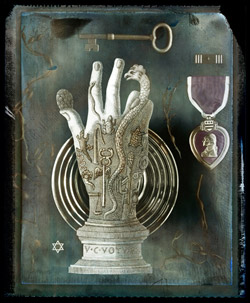 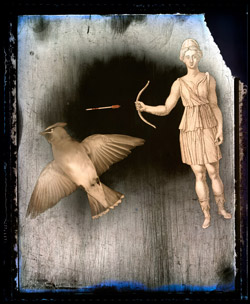 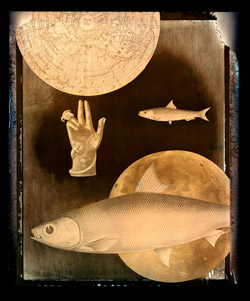